With Martin Plavins and Edgars Tocs winning the first final to claim a spot for Latvia in the Tokyo 2020 Olympics, Daniele Lupo and Paolo Nicolai of Italy posted a 2-0 (21-17, 21-19) win in 35 minutes over Alexander Brouwer and Robert Meeuwsen of the Netherlands to claim a berth for their country at the Japanese Summer Games. 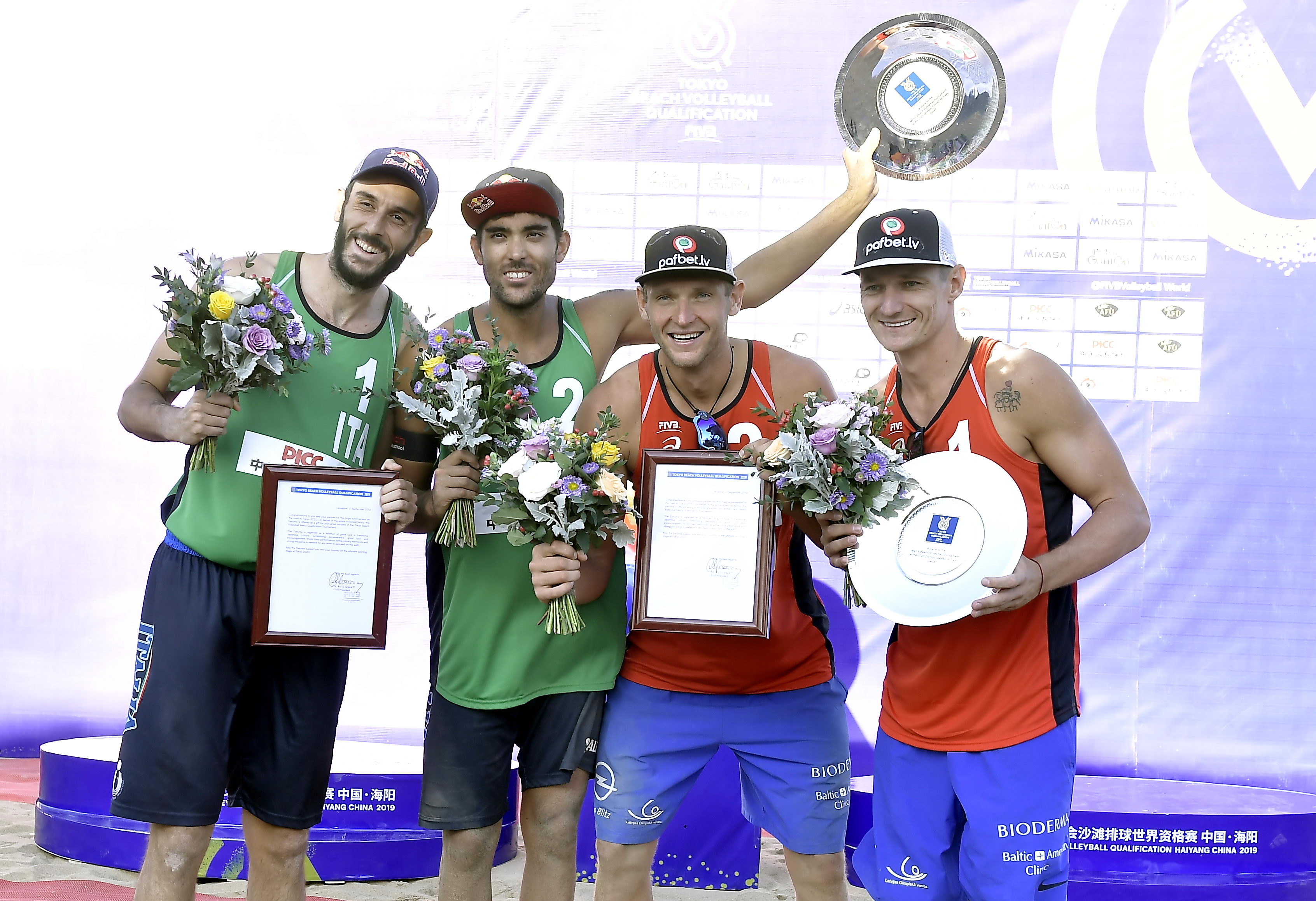 Qualifying their countries for Tokyo 2020 are Paolo Nicolai, Daniele Lupo, Edgars Tocs and Martin Plavins
“It was such a different tournament with so many pool play matches to reach the finals, said Nicolai, who teamed with Lupo to capture the silver medal at the Rio 2016 Olympics after placing fifth together in the London 2012 Summer Games.
“We are thrilled to clinch this berth early as we now can concentrate on Tokyo while competing on the World Tour,” said the 31-year-old Nicolai.  “We have played so many matches against the Dutch, so both teams know each other very well.  It was our day and we are so proud to represent Italy again in the Olympics.
Saturday’s match was the 15th FIVB meeting between the two teams with Lupo and Nicolai leading the series 8-7 over Brouwer and Meeuwsen, who captured the bronze medal at the Rio 2016 Olympic Games.  The two teams have met four times on the European tour with the head-to-head tied at 2-2.
Lupo and Nicolai, who won five of eight matches this week, entered the finals after dropping their last two pool matches to the Russians and the Swiss pair of Mirco Gerson/Adrian Heidrich of Switzerland.
Despite a 1-2 pool record in their final set of group matches, the Italians won the tie-breaker due to the best point ratio among the tying teams from Switzerland and Poland (Piotr Kantor/Bartosz Losiak) to advance to the finals as the second-place team.
Quick links - Beach volleyball:
Tokyo Beach Volleyball Qualification - Haiyang
Facebook
Twitter
Instagram
Plavins, a bronze medal winner at the London 2012 Olympic Games with Janis Smedins, and Tocs rallied in the their final to post a 2-1 (12-21, 22-20, 15-8) win in 46 minutes over Ilya Leshukov and Konstantin Semenov of Russia. It was the second FIVB meeting between the two teams with Leshukov and Semenov defeating the Latvians earlier this season at the Warsaw Open in Poland.
"This is unbelievable," said the 34-year-old Plavins.  "We did not expect this since we had to play so many tough matches this week through three pools to reach the finals.  We stayed the course and just fought hard throughout the four days of competition against excellent competition."
The Latvians won six of their eight matches in the FIVB Tokyo Beach Volleyball Olympic Qualification tournament highlighted by a Saturday morning 2-0 (21-17, 21-16) Pool J win in 39 minutes over Andre Loyola/George Wanderley of Brazil to advance to the afternoon finals against the Russian, who had won six of their seven group matches.
The two Latvian setbacks were in pool play matches Wednesday and Friday to Brouwer and Meeuwsen, who were defeated by Leshukov and Semenov Wednesday.
The FIVB Tokyo Beach Volleyball Olympic Qualification tournament concludes Sunday with the women's finale featuring teams from the Czech Republic, Germany, Latvia and Spain.
Elsa Baquerizo Liliana Fernandez of Spain meet Sandra Ittlinger/Chantal Laboureur of Germany in the first final followed by Tina Graudina/Anastasija Kravcenoka of Latvia against Barbora Hermannova/Marketa Slukova of the Czech Republic.