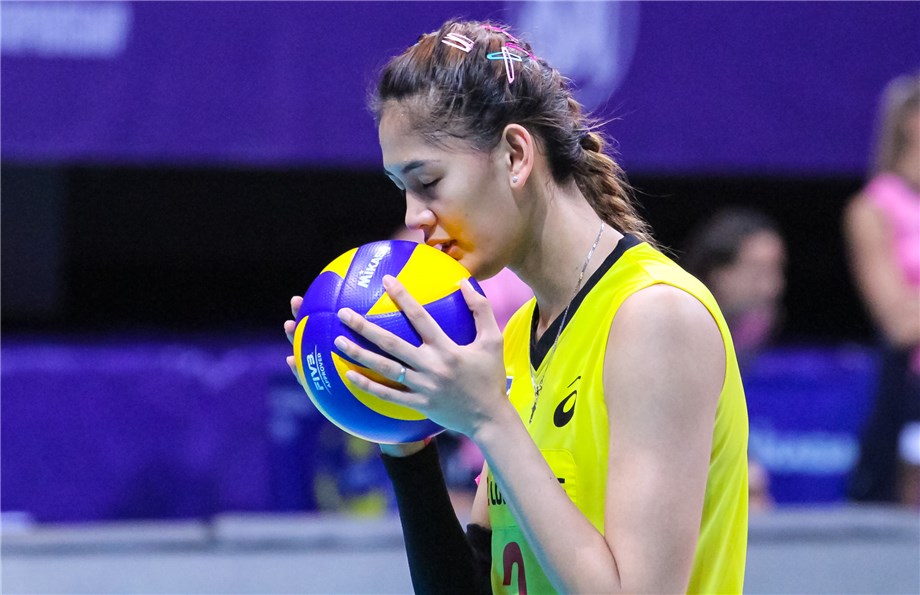 Lausanne, Switzerland, February 23, 2020 – Middle blocker Alyja Daphne “Jaja” Santiago is a 24-year-old player from the Philippines. A member of her country's national team, Jaja helped Ageo Medics to a bronze medal finish in the 2019/2020 Japan Women's V.League in her second season with the club - a first for a player from the Philippines. As part of a series of articles looking at volleyball in Japan, she tells us about her experience of playing in the country's top division.

"Ending the season with a podium finish in the Japan V.League was very fulfilling as an athlete. All the hard work and sacrifices that my team Ageo Medics made were worth it in the end.
"As a Filipina volleyball player, it was really an overwhelming experience. It was an honour to represent my country and at the same time to win a medal in Japan.

"It was quite an enriching journey for me. It included many challenges along the way, but it was a rewarding one to cap off my first two seasons as a professional athlete.

"My first year in Japan was very difficult and somewhat frustrating. I dealt with so many things like adjusting to a new environment, the culture and the people, and also adapting to harder training sessions.

"I struggled a lot in practice because I could not really apply some of the basic skills, which I believe I am equipped with. I was afraid of committing basic mistakes, which made it harder for me to cope because my team are really keen on the basics. So each practice was a challenge which I needed to survive and surpass every single day.

"There was also that struggle that you are away from your loved ones. I could not really vent about problems, and I could not even hug anyone or even cry to someone. However, these kinds of struggles made me stronger as an athlete because they taught me how to be more independent and mature.

"In my second year it was easier to cope with all the difficult situations that I encountered. I became more comfortable, happy, well-focused in practice and I felt I had a better connection with all the players in the team. I learned a lot from my teammates and my coaches.

"My coach (former USA coach Toshiaki Yoshida) would spend time on me with one-on-one sessions in blocking, just to get the right form and speed. He really dedicated his time to improve every single skill that he thinks I am capable of improving.

"The best part comes when it’s time to play because our coaches don't make us feel pressured on the court. They will just guide you and coach you in the best possible way. They are very calm and smart during the matches and it is up to me to apply everything I have learned from them through my performance.

"Above all, I learned to be a professional athlete by becoming more disciplined, being more focused and prepared for each match. I have learned a lot from this experience, but I will not stop here. Every opportunity is a challenge to conquer and every challenge is a chance to learn something new."