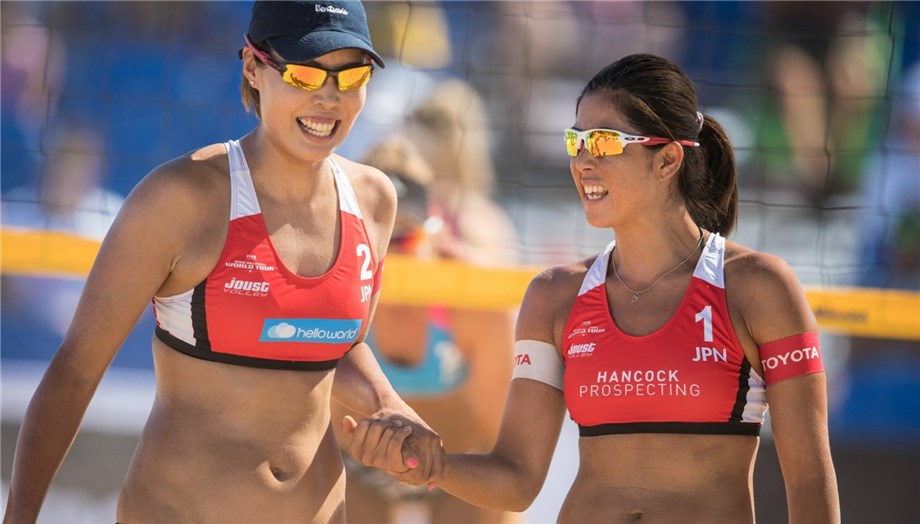 Wada (left) and Nishibori finished ninth at the Shepparaton Open

Lausanne, Switzerland, March 14, 2017 – Four teams from Japan will be building towards the Tokyo 2020 Olympic Games when they compete at the women-only FIVB Beach Volleyball World Tour Sydney tournament that runs from March 17-19.
The Japanese teams which will compete on Sydney’s Manly Beach are composed of Takemi Nishibori and Marie Wada, Akiko Hasegawa and Azusa Futami, Sayaka Mizoe and Suzuka Hashimoto, and Yukako Suzuki and Miki Ishii.
It will be the second time in three weeks that Australia has hosted an FIVB Beach Volleyball World Tour event following the Shepparton tournament earlier in March.
Nishibori and Mizoe are the most experienced players in the Japanese delegation. The two now team up with different partners but enjoyed a quarterfinal finish together at the 2015 FIVB Puerto Vallarta Open.
The Japanese pairs will be looking to build up their experience and world ranking position before Tokyo 2020 by competing on the World Tour, Asian Tour and Japan Beach Volleyball Tour.

At Tokyo 2020 beach volleyball will take place at Shiokaze Park, part of the Tokyo Bay Zone.
As hosts Japan are automatically awarded a place in the women’s and men’s tournament, but no Japanese team qualified for the Rio de Janeiro 2016 Olympic Games. Kentaro Asahi and Katsuhiro Shiratori are the most recent Japanese players to have experienced an Olympic Games, but were knocked out at the end of the pool stage at London 2012.
Chiaki Kusuhara and Mika Saiki were the last Japanese women to play at an Olympic Games at Beijing 2008, though they were beaten in all three pool matches.
Quick links - Beach volleyball:
FIVB Beach Volleyball World Tour - Sydney
FIVB Beach Volleyball World Tour 2017
Rio 2016 Olympic Games - Beach Volleyball
FIVB.com - Beach Volleyball
Latest Videos
Facebook
Twitter
Instagram
Media Guides
For more information on beach volleyball events coming up soon in Australia, visit www.volleyballaustralia.org.