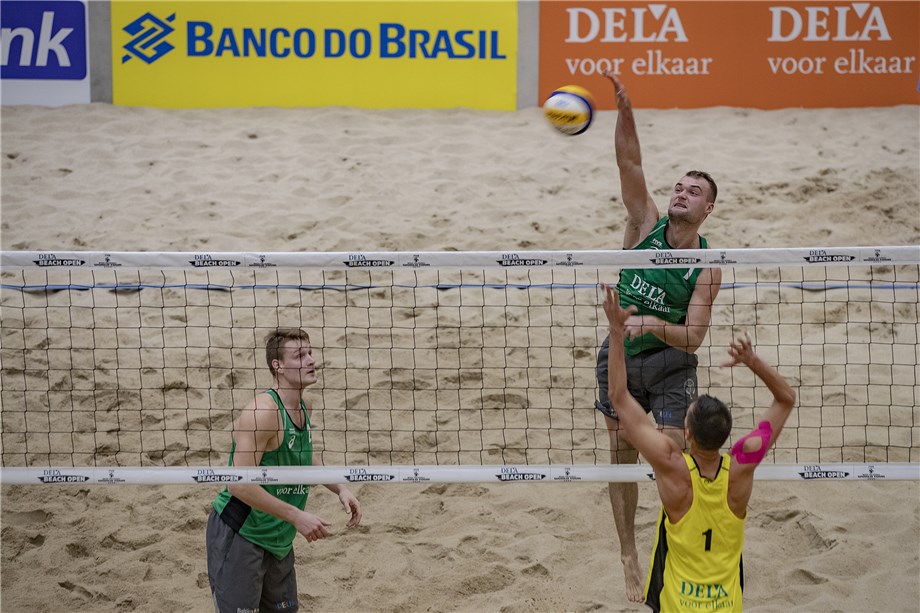 The Hague, Netherlands, January 3, 2019 – Robert Juchnevic and Artur Vasiljev took another step in their nascent careers when they reached an FIVB World Tour Beach Volleyball 4-Star main draw for the first time on Thursday.
The Lithuanian pair progressed through the 4-Star Dela Beach Open qualifying rounds and booked their place in the main draw with a 2-0 (21-19, 21-12) victory over England’s Chris Gregory and Issa Batrane.
Quick links - Beach volleyball:
FIVB Beach Volleyball World Tour
FIVB.com - Beach volleyball
Latest Videos
Facebook
Twitter
Instagram
It is their second World Tour competition and the second time they’ve reached a main draw after they finished ninth at the 2-Star Jinjiang tournament in June 2018.
“It was quite difficult,” Juchnevic said. “Thompson is two metres, 10 centimetres and we don’t have that sort of height between us.
“I think we did our best. We couldn’t do better. It is a crazy feeling, our first main draw in a 4-Star tournament. We will just try to show something better than today and we will see.”
Joining them in the main draw are French duo Olivier Barthelemy and Arnaud Loiseau.
It is Loiseau’s first 4-Star tournament and only his second alongside Barthelemy. They needed to beat compatriots Romain Di Giantommaso and Jeremy Silvestre 2-1 (15-21, 22-20, 17-15) to maintain their progress.
“I wasn’t confident at the beginning of the competition because I had a shoulder injury one year ago and this is my first 4-Star competition,” Loiseau said. “I was looking forward to playing, and now it is game by game.
“I’m pleased with how I played, but now I’m not thinking about how I’m playing. I just want to prove myself again and again.
“We don’t know each other very well and we train at different places, so it has been a while since we’ve seen how each other play. It is still another opponent and we had to treat them like any other team.”
The tournament runs from January 2-6 and is being played on indoor beach courts at the Sportcampus Zuiderpark. It is the second year in a row that The Hague has hosted a tournament at this time of year and it has proved popular among the players who are able to compete at a top-level tournament when they would normally be involved in warm weather training.