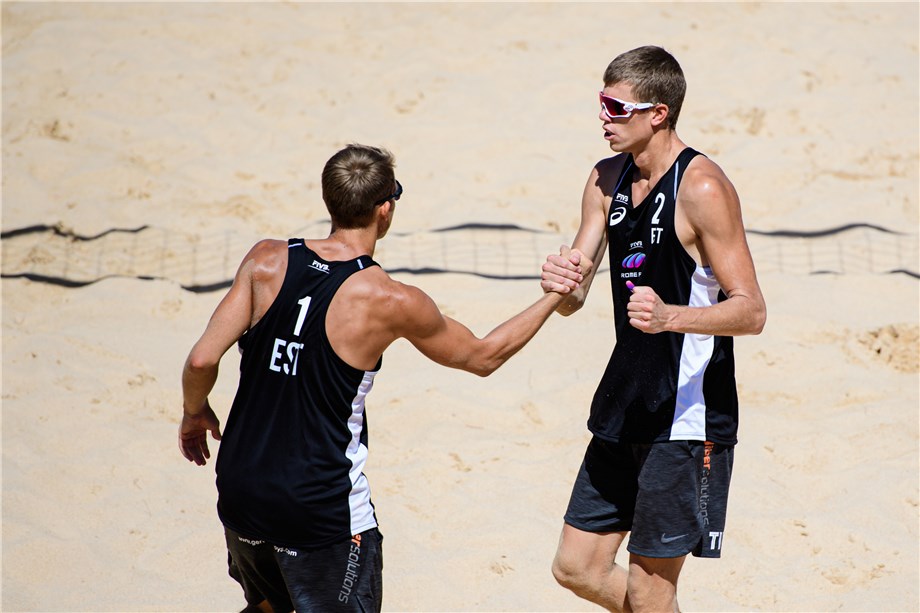 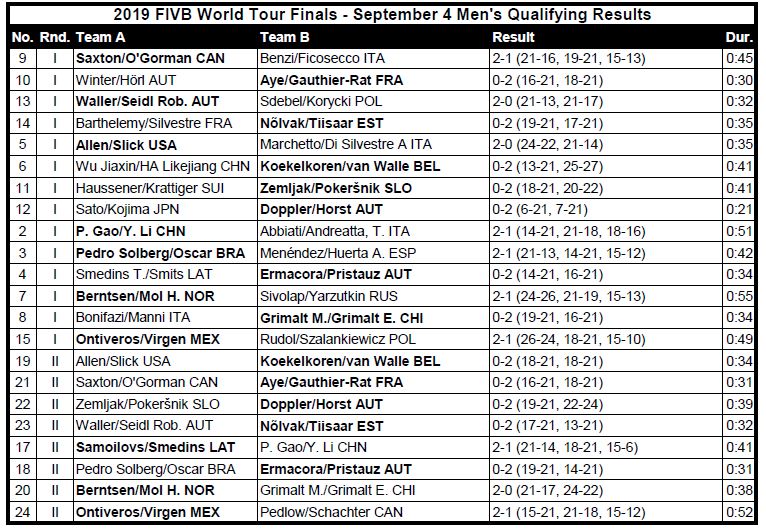 Here Wednesday afternoon during the qualifying rounds at the $600,000 FIVB World Tour Finals at the Foro Italico, the two teams were playing for a spot in Thursday's opening main draw pool play rounds in the 2018-2019 season's final international event.
Quick links - Beach volleyball:
FIVB Beach Volleyball World Tour Finals - Rome
Facebook
Twitter
Instagram
Both were successful as the top-seeded Samoilovs and Smedins avoided an early exit from this week's event by ousting 17th-seeded Peng Gao/Yang Li of China 2-1 (21-14, 18-21, 15-6) in 41 minutes to stay in contention for their third FIVB World Tour gold medal this season after winning their last two starts in Russia (Moscow) and Jurmala.
Despite a “shaky” start to the season, Samoilovs said “we continued to believe in ourselves and finally we found a rhythm and started winning. Momentum? Yeah, sure. Mentally we are ready to play but maybe our bodies don’t feel so good, but our mind can push our bodies further. That’s what we did for today’s match and what we’re going to do for the rest of the week.”
In discussing the match with the Chinese, Smedins said “the first set was good for us without any mistakes with some good blocks and some aces. The second set was a little bit shaky and they played well. In the third set, it was 5-5 and then I don’t know what happened. We got every ball and they couldn’t make a sideout.”
Playing in their third qualifier in their last six FIVB World Tour appearances, Samoilovs said “we’re never counted how many points everybody else has, how many points we have. We never count until we start to play. It’s not mathematics we are doing, we are playing beach volleyball, just play and go.”
While the Latvians only played once Wednesday, Nolvak and Tiisaar were confronted with two elimination matches where the 10th-seeded Estonians were on the winning side by defeating 23rd-seeded Olivier Barthelemy/Jeremy Silvestre of France 2-0 (21-19, 21-17) in 35 minutes and seventh-seeded Robin Seidl/Philipp Waller of Austria 2-0 (21-17, 21-13) in 32 minutes.
After defeating the French in their first match Wednesday, the 27-year old Tiisaar said "it was our first win in a five-star tournament and I hope it leads to another one and then we can have another accomplishment to celebrate at the end of the day.”
Playing in his 33rd FIVB world Tour event with Nolvak, Tiisaar said “winning that silver medal in Jurmala certainly helps with our confidence. We met Anders Mol’s parents here and they congratulated us and said that we were very patient because we have been playing for a while and only now the results are starting to show. I think it’s a great way to describe our team. We always keep trying and it’s nice to see the first results coming our way.”
Also securing main draw berths Wednesday were two teams from Austria along with pairs from Belgium, France, Mexico and Norway.  Sixth-seeded Clemens Doppler/Alexander Horst and eighth-seeded Martin Ermacora/Moritz Pristauz-Telsnigg qualified for Austria along with 12th-seeded Dries Koekelkoren/Tom van Walle of Belgium, 13th-seeded Mathias Berntsen/Hendrik Mol of Norway, 14th-seeded Quincy Aye/Arnaud Gauthier-Rat of France and 15th-seeded Lombardo Ontiveros/Juan Virgen of Mexico.
Following Thursday’s two rounds of pool play matches for the 32 teams in the main draw, the top three teams from each of the eight groups advance to Friday’s first two rounds of elimination.  The quarter- and semifinal contests will be played Saturday followed by the medal matches Sunday at the Foro Italico.