Ekaterinburg, Russia, April 3, 2020 – Nikolay Karpol’s 51 years as head coach of one team, Uralochka, is considered by many the world record in volleyball and even in all professional team sports. While the legendary specialist has been hinting at a possible oncoming retirement, the Karpol dynasty era at the glorious club from Ekaterinburg looks set to continue for years to come.

Ekaterinburg, Russia, April 3, 2020 – Nikolay Karpol’s 51 years as head coach of one team, Uralochka, is considered by many the world record in volleyball and even in all professional team sports. While the legendary specialist has been hinting at a possible oncoming retirement, the Karpol dynasty era at the glorious club from Ekaterinburg looks set to continue for years to come.
The most decorated coach in the history of volleyball and in the history of Russian team sports is about to turn 82 years of age on May 1 and he is still actively working at the helm of Uralochka-NTMK Ekaterinburg, but right beside him, in the role of his assistant and taking over at away matches, is his grandson Mikhail, soaking up knowledge and experience from his remarkable grandad and aspiring to follow in his footsteps as the heir apparent.
Nikolay Karpol was hired to coach Uralochka in 1969. With patient professionalism and strict discipline, he turned his squad into a world-class team, which won eight continental and 25 national titles, as well as bronze at the 1992 FIVB Volleyball Club World Championship, among many other honours.

Karpol was named FIVB Coach of the Year in 1989 and 1991 and the best coach of the 1990 World Championship.
Sometimes criticised for his rough style of coaching, loudly scolding and yelling at players, especially during time-outs, Karpol has demonstrated the success of his methods. He is lauded as an exceptional cognoscente in women’s psychology and master of the carrot and stick.

Among the many anecdotes on the topic, most illustrious is the one from the Olympic final at Seoul 1988, when the Soviets were two sets behind and Peru were just three points from the win at 12-6 in the third, when Karpol took a time-out and the whole world watched him shout at his players. He told them no one wanted to see the volleyball they were playing, because it was “disgusting to watch” and there was no fire in their eyes… “How are you going to explain this to your grandmother, when we go back home? How are you going to look at her in the eyes?” he said to Irina Smirnova. He knew her grandmother was her biggest fan, that Smirnova absolutely worshipped her and that it would produce an immediate psychological effect on her. And the miracle happened! She and her teammates went back to the court and delivered one of the greatest comebacks in the history of volleyball, a 3-2 (10–15, 12–15, 15–13, 15–7, 17–15) victory. 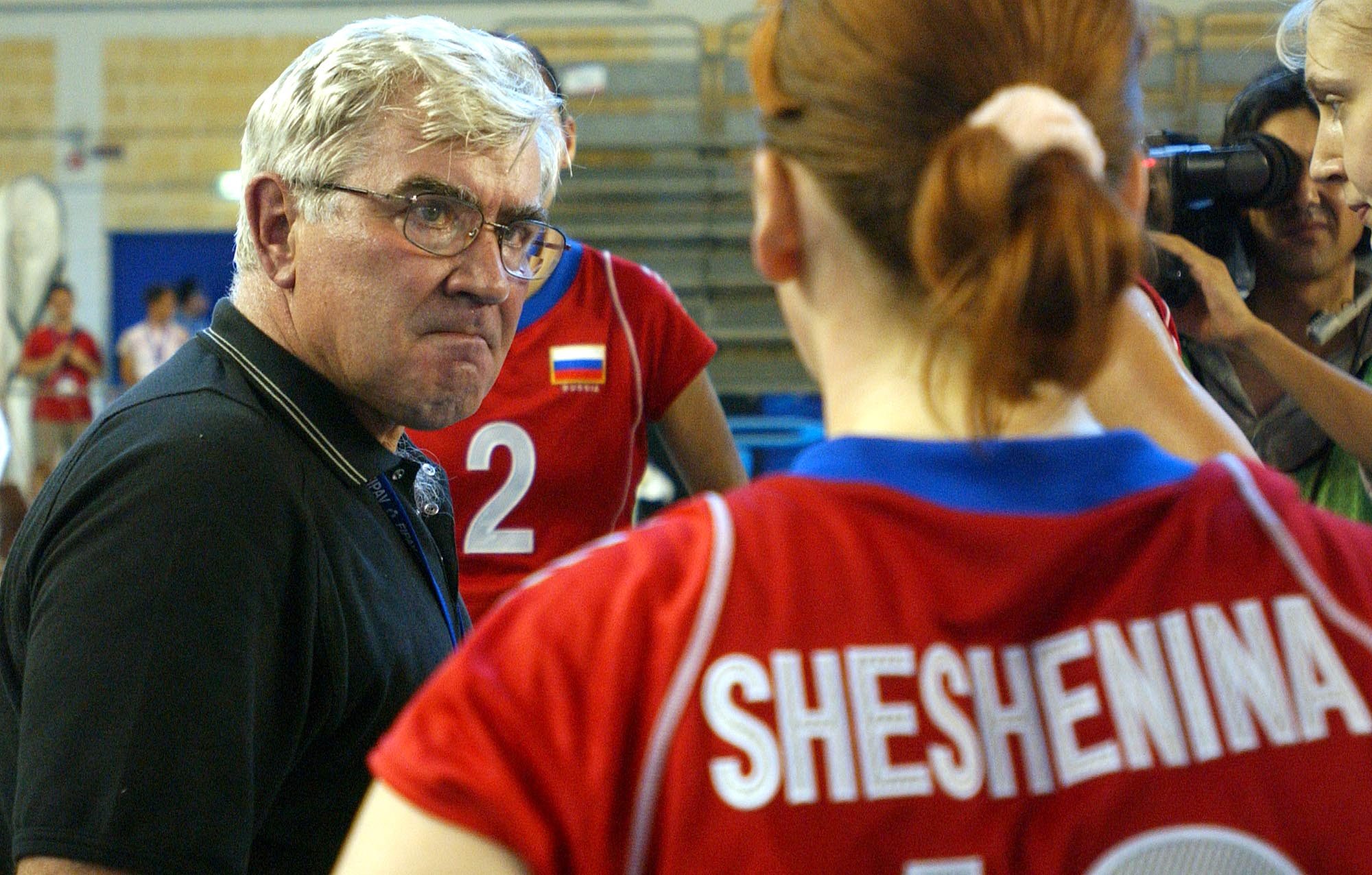 Nikolay Karpol as head coach of Russia during a 2003 FIVB World Grand Prix match
“You cannot be indifferent! My mood is immediately transmitted to the players. They cannot play without emotions. I am an actor and I am ready to play any role according to the script, which the players write during the match. It depends on them if that role will be of a positive or a negative character. Even loving parents sometimes yell at their children. It is a tactical tool, a pedagogical method. I consider myself a teacher in the first place, and only then, a coach,” Nikolay Karpol explains to reporters, who often ask him about his controversial style. Most of his players speak of him exclusively in positive tones and some even endearingly call him ‘dad’.
Born in 1938 in Poland (on today’s territory of Belarus), Nikolay had a very tough childhood. Growing up during World War II, he tragically lost his father and two uncles as well as his grandfather and grandmother. His mother fell very ill and because of post-war poverty an orphanage helped raise his younger brother. In the post-war period, sports served as an invaluable passage to normal life, a great way to raise spirits, and volleyball was one of many sports young Karpol was really good at. He moved to Ural in 1956 to continue his education. Striving to pursue a professional career as a mathematician, he had a day job coaching volleyball and an evening job teaching physics and astronomy. It was the volleyball stars he ended up working with for the rest of his life.
Before connecting the rest of his professional life with the Uralochka volleyball club, Nikolay Karpol linked his private life with one of the team’s leading players at the time, Galina Duvanova. The two were married with family and business becoming tightly intertwined over several decades. Mrs. Karpol also took on a coaching job at Uralochka and when in the 1990s Mr. Karpol went on successful consulting and coaching assignments abroad (Croatia, Spain, Japan), he knew the club was safely under his wife’s control.
Another family tragedy marked the life of Nikolay Karpol in 1993 when he lost his son and daughter-in-law to a car crash. Nikolay and Galina Karpol raised their grandson Mikhail and adopted the four-year-old child.
Years later, the legendary coach would say, “I really hope my grandson will continue my mission…”
To be continued…
Related articles:
Karpol awarded national honour
Legendary coach Karpol visits FIVB
Olympic Countdown - Seoul 1988: Soviet women leave Peru in tatters
Volleyball Hall of Fame Inducts Class of 2009
More volleyball from Russia:
Koroleva, Startseva sign with Russian champs for two more years
Loko Novosibirsk earn historic title; golden double for Dinamo Kazan
From Moscow to Punta Cana: De la Cruz enjoys unique flight
17-year-old Murashko named MVP of U23 Russian League
Dinamo Kazan extend contract with Croatia's Fabris for two seasons
Ukraine’s Iereshchenko stuns Fakel from serving line
Russian stars Kobzar, Poletaev steer Kuzbass to unexpected turnaround in Champions League
Loko Novosibirsk first-time regular season winners in Russia
Parubets shines in Russian quarterfinals
Maciej Muzaj’s top five scoring performances in Russia
Dinamo Kazan top regular season in Russia, all set for playoffs
End of an era? Zenit’s earliest ever Champions League exit
Kseniia Parubets shines as Champions League top scorer
Olympic champ returns to Russian Superliga
Russian national team opposites engage in scoring race
Poletaev back in action after injury
Goncharova proves priceless for Dinamo
Quick links:
FIVB.com - Volleyball
Facebook
Twitter
Instagram
Youtube