Ekaterinburg, Russia, April 10, 2020 – After a successful career as a tennis player cut short by injury, Mikhail Karpol, grandson of Nikolay, turned his attention to what could be called the 'family business', Uralochka-NTMK Ekaterinburg.

Ekaterinburg, Russia, April 10, 2020 – After a successful career as a tennis player cut short by injury, Mikhail Karpol, grandson of Nikolay, turned his attention to what could be called the 'family business', Uralochka-NTMK Ekaterinburg.
After losing both of his parents at a very young age, Mikhail was taken to Croatia by his biological grandparents and adoptive parents, where Nikolay Karpol was working at the time. The young boy grew up in the southern European country, learned the language, went to school, received Croatian citizenship and started playing tennis. In his teenage years, he won medals of all colours at world and European age-category championships.
In 2009, however, he moved back to native Ekaterinburg with the aim of continuing his education. Finding similarities between volleyball and tennis, he started playing amateur volleyball and helped his grandad at the Uralochka club, initially just chasing balls, but gradually learning the ins and outs of the coaching profession.
In 2014, Mikhail Karpol steered Uralochka’s junior team to the national title in Russia. As his grandfather’s right-hand man on the women's team's coaching staff, he also earned silver in the 2015 CEV Challenge Cup and a silver and four bronze medals in the Russian Superliga.
“It is very hard to follow in Nikolay Vasilyevich’s footsteps, because he has unbelievable results," Mikhail Karpol told fivb.com, in an English with a discernible western Balkan accent. “He is the best coach in the world.”

“To tell you the truth, there is a little bit of pressure in being his grandson, because as soon as you have some bad results everybody says, ‘well, he’s not his grandfather and he’s never going to be like him.’ But it’s a great pleasure to work with such a great professional, such a great dad and such a great coach.”
Mikhail Karpol admits his coaching style is different. “My methods are milder,” he says with a smile. “I do not have such authority, such a name and such merit to be able to use his coaching technique yet.”
Reporters often ask Mikhail if Nikolay Karpol yells at him the same way he is known to yell at players.
“His requirements from me are much higher. Sometimes he yells at me more than he yells at the girls,” the young coach replies. “But I understand that this is only because he wants to transfer his knowledge to me as soon as possible, to teach me everything that he himself has learned. So I am not offended at all. I pay attention and draw conclusions. He doesn’t just scream; he says smart things and they are worth a listen. His yelling is anecdotal, but I know he is a very kind person and wishes everyone the best.”
Mikhail Karpol feels the connection his prominent last name has with Uralochka and is aware it comes with great responsibility.
“I want to continue the work that Nikolay Vasilyevich devoted his whole life to. For me, it is very interesting, and, for him, I think he will be at peace to transfer his beloved brainchild into the hands of a reliable person.” 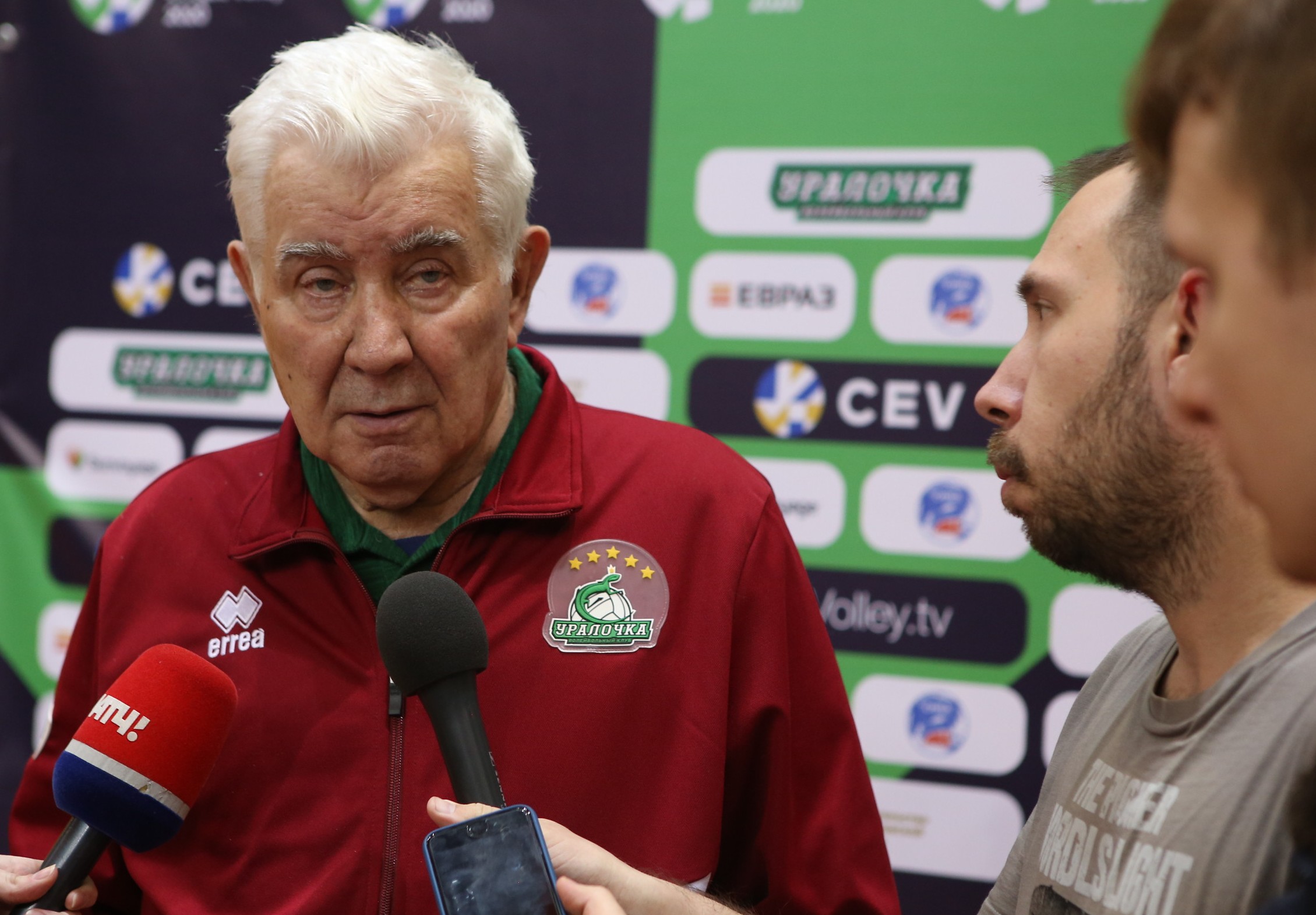 Nikolay Karpol talks to the reporters after a 2020 Champions League match
Nikolay Karpol himself thinks highly of the progress his grandson has made, but remains true to his demanding nature.
“Mikhail is my grandson, so I am entitled to yell at him,” he jokes. “I am trying to make sure he doesn’t turn up his nose and think too highly of himself ahead of time. Well, I am glad that he is in volleyball now. He communicates well with the girls and is my reliable assistant. But he still has a lot of learning to do. As a coach, he is qualified, but he has yet to become a teacher. He is still working in that direction. The main thing is that he strives for new knowledge, always looking for something new. In this aspiration, I see the future.”