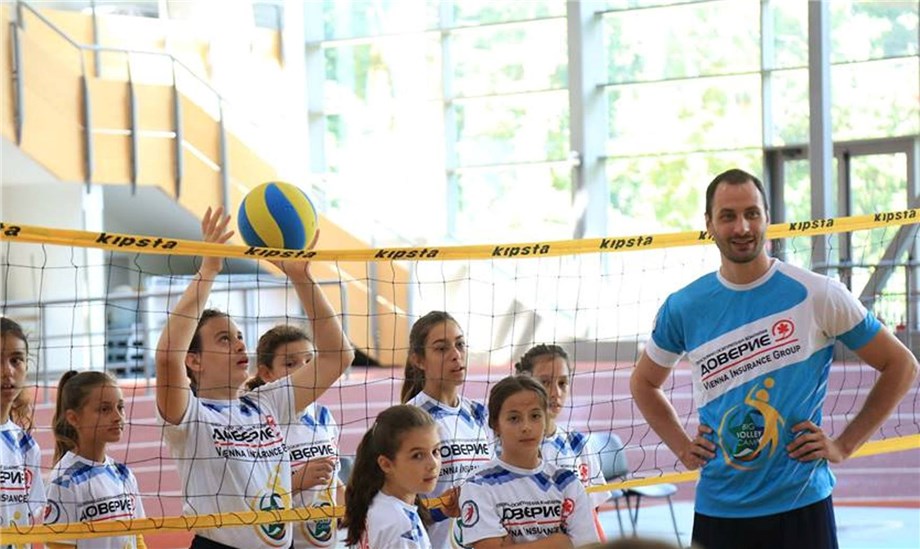 Sofia, Bulgaria, June 24, 2020 – One of the most successful Bulgarian players, 35-year-old outside hitter Matey Kaziyski has no imminent plans to return to the national team, but is helping to further develop volleyball in Bulgaria by nurturing the talents of the hundreds of young hopefuls in the academy he and prominent coach Radostin Stoytchev have now been running for several years in Sofia.
“It has been eight years since I last played for the national team. Unfortunately, now it is a bit too late for a comeback,” the former Bulgarian international said in an interview for bTV’s 120 minuti. There aren’t many players at the age I am now that would be capable of playing at that level. But if I see some big reason to return to the national team, it is something we could talk about. But again, at my age this would be very difficult and I think it is a lot more important to work for the benefit of Bulgarian volleyball as a whole than just of the national team. We try to do our best to train future Bulgarian volleyball players.”
Kaziyski was part of the Lions’ squad between 2003 and 2012 and helped win bronze medals at the 2006 FIVB Volleyball World Championship (with an individual award for Best Server) and the 2007 FIVB Volleyball World Cup. 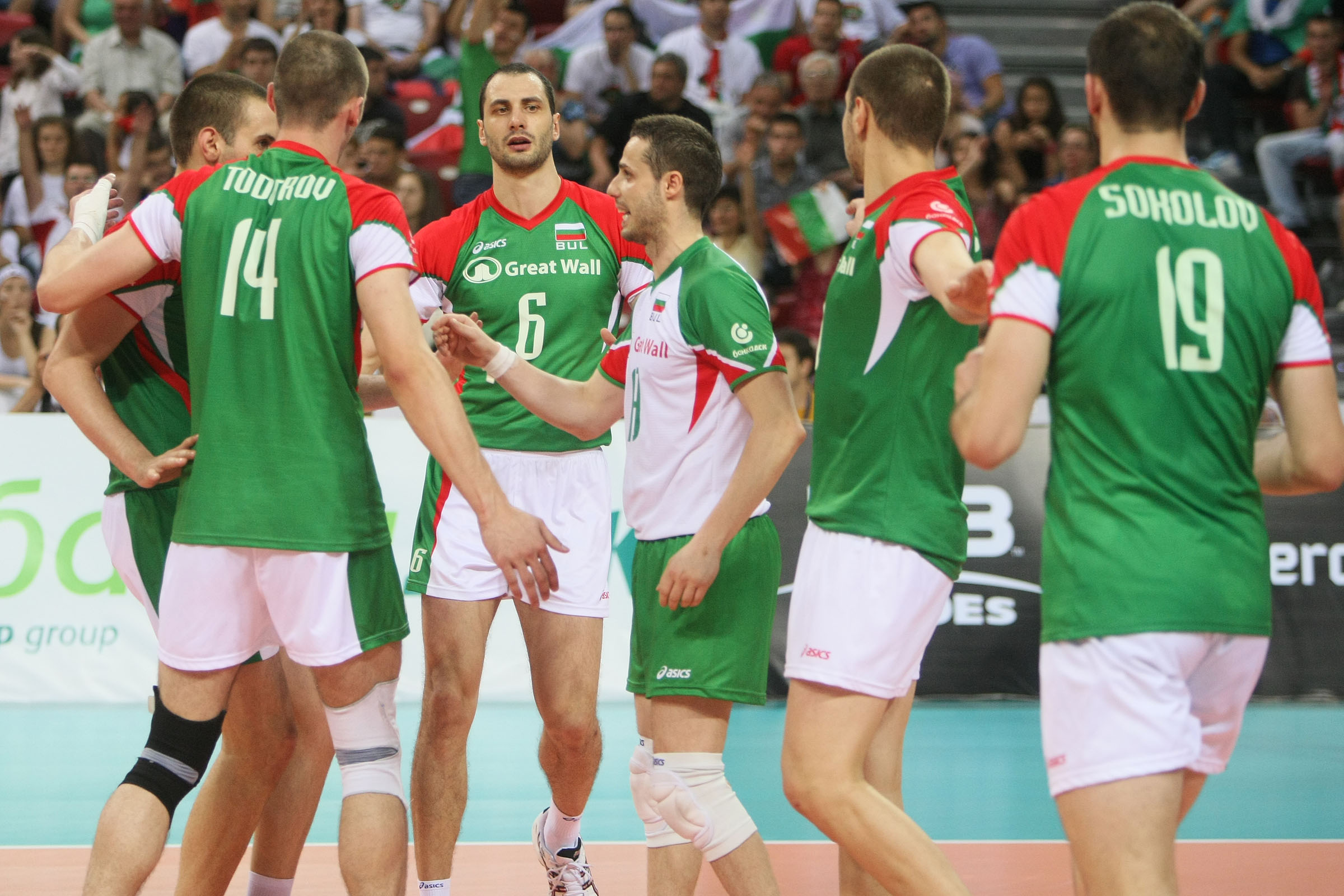 Matey Kaziyski celebrates with his teammates during his last match with the national jersey in 2012
“These are definitely some of the best moments of my career, but I have mixed feelings,” he revealed. “We achieved incredible results, but I always thought we had potential for more. So I still feel the taste of a missed opportunity, of something that could have been even bigger and more beautiful.”
As a member of the national team, the 2.02m-tall striker also won bronze at the 2009 CEV European Championship, participated in the 2008 Olympic Games and claimed two FIVB Volleyball World League individual awards – for Best Server in 2004 and for Best Spiker in 2006. He was also among the bronze medallists of the 2003 FIVB U21 World Championship.
Kaziyski was part of Trentino Volley Trento’s golden generation, which won four consecutive FIVB Club World Championship titles and four consecutive CEV Champions League titles from 2009 to 2012 under the guidance of Bulgarian coach Radostin Stoytchev. In 2009, Matey was named MVP of both competitions, highlighting the numerous individual honours he received at the two events through the years. 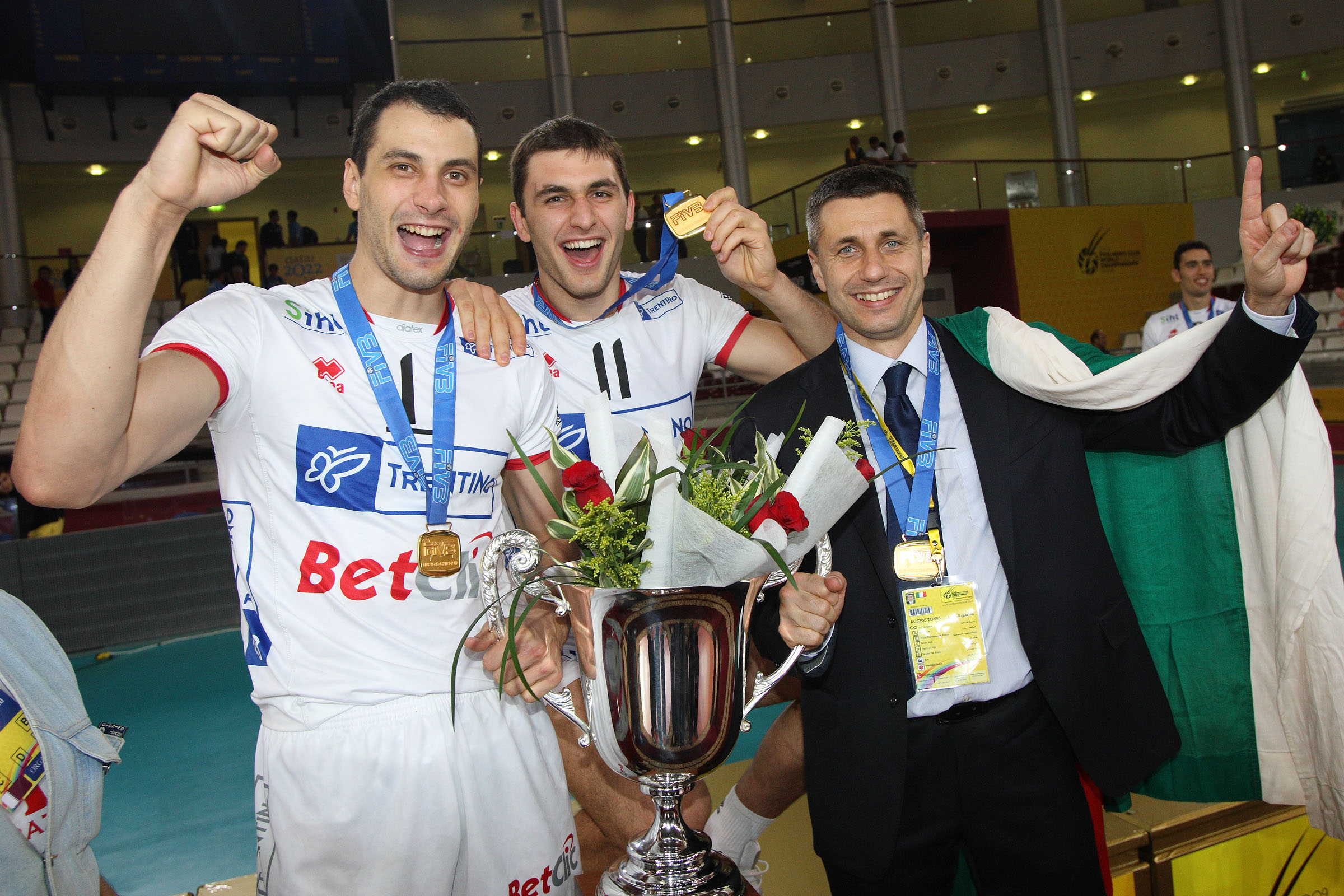 Trentino’s Bulgarian trio Matey Kaziyski (left), Radostin Stoytchev (right) and Tsvetan Sokolov celebrate as club world champions in 2009
“Everywhere you play, you leave a small part of you. The longer you stay at one place, the bigger that part is. And this will continue to be the case for me in the future,” said Kaziyski.
Most recently, he became national champion of Japan wearing the jersey of JTEKT Stings Kariya before transferring back to Italy to reunite with coach Stoytchev and defend the colours of Calzedonia Verona on a contract set to last through the 2021-2022 season. It was in Italy he had to self-isolate with his Italian wife and their three-year-old son during the coronavirus pandemic, before they made their way to Bulgaria in early June.
“Having a backyard gave me the opportunity to do some training at home - nothing special: some light jogging and jumping - and somewhat stay in shape,” he said. “I want my son to live in a world without dangerous viruses roaming around. I hope the current situation will be behind us as soon as possible so we can go back to our normal way of life.”
In early 2016, Stoytchev and Kaziyski founded and gave their names to a volleyball academy in Sofia. With the iconic status the duo have in their country, kids flocked to the academy hoping to learn the ins and outs of the game and follow in Matey’s footsteps.
“One of our big dreams is to have a training hall of our own to fit all our kids together, because with 160 of them now and counting, we are forced to use the services of several different facilities. Almost all of them have potential; the question is how this potential will be developed. We are trying to pull out the maximum not only sports-wise, but also to enrich their personalities,” Kaziyski added.
Born into a family of volleyballers, Matey himself did not need much pushing as a child to find his way to the top.
“Both my parents were active athletes as I was growing up and I spent much of my childhood years at the sports halls. They never pushed me to play volleyball; it happened naturally,” he recalled. “One way or another, I always played volleyball or at least played with volleyballs and this was what lit the spark. It was obvious that I had some kind of potential, but eventually my talent was unveiled to a point where I could start dreaming of something bigger than simply playing volleyball.”
More volleyball from Bulgaria:
Bulgarian Lionesses start preparations for summer 2021
Best of Tsvetan Sokolov’s Facebook Live answers
Player of the Week: Tsvetan Sokolov
FIVB deeply saddened by passing of Bulgarian volleyball legend Todor Simov
Samuil Valchinov: Keen to succeed
Get to know: Nikolay Uchikov
Zhana Todorova: VNL experience – great asset for Bulgarian volleyball’s future
Bulgaria captain Yosifov chasing targets in VNL
Top guns Aleksiev and Sokolov back to Bulgarian roster
Bulgaria’s coach Prandi announces plans for upcoming season
Bulgaria eager to play in the big leagues again
Zhana Todorova: VNL is where we belong
Quick links - Volleyball:FIVB.comFacebookTwitterInstagramYoutube