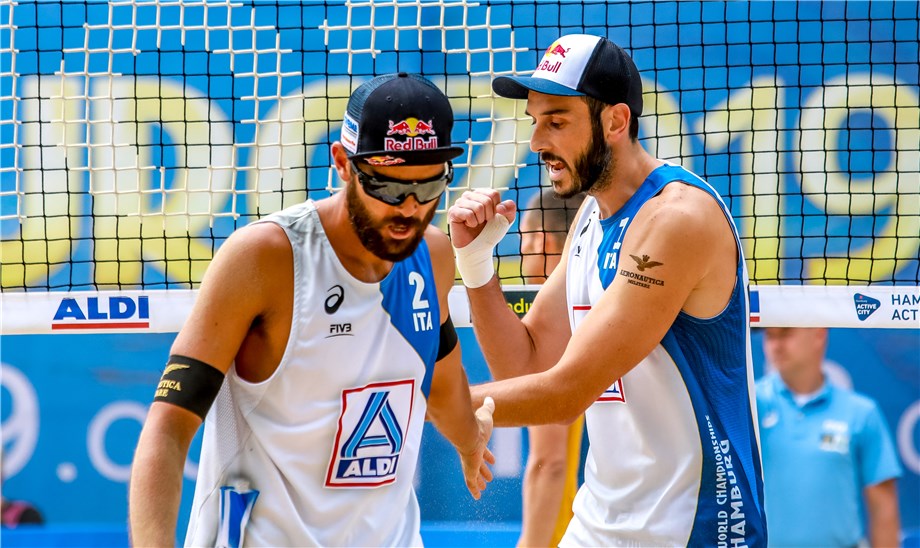 Paolo Nicolai (right) and Daniele Lupo are the Italian notables at this week's FIVB World Tour Finals in Rome at the Foro Italico.

Rome, Italy, September 2, 2019 - In a city where history stares you in the face every time you turn a corner, fans will be watching several players and teams at this week's FIVB Beach Volleyball World Tour Finals at the Foro Italico that have etched their names into the international record book.
Quick links - Beach volleyball:
FIVB Beach Volleyball World Tour Finals - Rome
Facebook
Twitter
Instagram
While a lot of the local attention at the $600,000 event will be centered on the Italian pairings of Daniele Lupo/Paolo Nicolai and Marta Menegatti/Viktoria Orsi Toth, the youthful Viking men's pair of Anders Mol and Christian Sorum lead a cast of foreign competitors that rank among the best-ever on the international circuit that started in 1987 for men and 1992 for women. 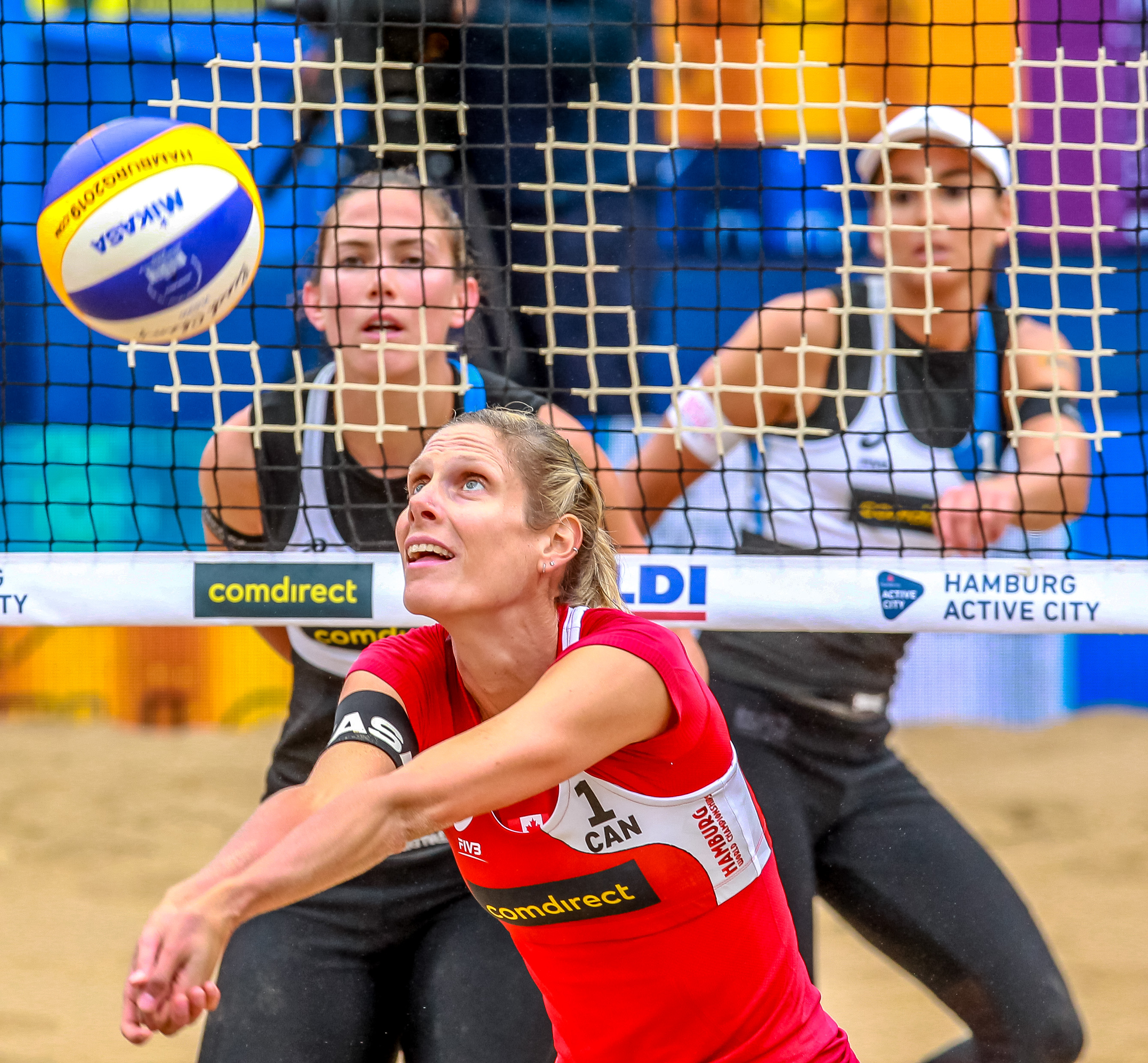 Viktoria Orsi Toth (left, white top) and Marta Menegatti (right) faced Sarah Pavan of Canada in the quarterfinals at the 2019 World Championships in Germany.
Lupo and Nicolai rank as the most successful Italian team ever on the FIVB World Tour as the pair has captured three international beach volleyball titles together with 21 podium placements, 24 final four finishes and a silver medal at the Rio 2016 Olympic Games.
Italian women have won three World Tour gold medals and Menegatti and Orsi Toth have two of the titles to their credit. A two-time Olympian, Menegatti has been the most successful Italian women’s player on the FIVB circuit with 14 podium placements and 22 final four finishes with Orsi Toth and Greta Cicolari. Menegatti and Orsi Toth have teamed for seven medals and 11 semifinal appearances.
The 22-year-old Mol and the 23-year-old Sorum have amassed one of the best-ever seasons in FIVB World Tour history as the Norwegians have won seven gold medals during the 2018-2019 campaign to tie three legendary pairs from Brazil for the second most titles in one season. 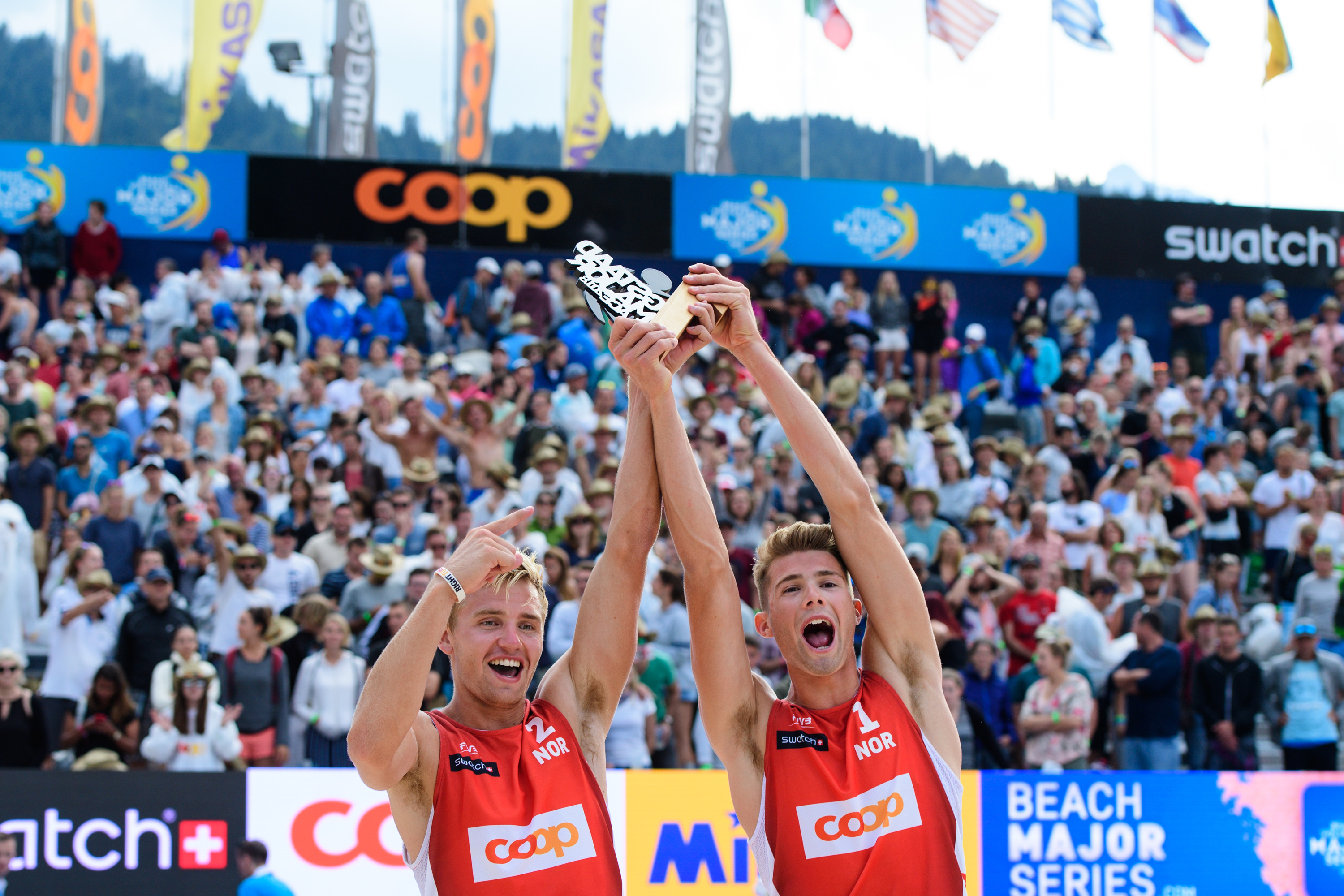 Christian Sorum (left) and Anders Mol captured their first FIVB World Tour gold medal for Norway at the 2018 Gstaad Major.
With a sparkling 61-4 match mark in 11 World Tour events together, Mol and Sorum can break a tie with Roberto Lopes/Franco Neto (1995), Jose Loiola/Emanuel Rego (1999) and Emanuel/Ricardo Santos (2004 and 2007).
Phil Dalhausser, who is competing this week at the Foro Italico with Nick Lucena, holds the record for gold medals in a single-season with nine podium-topping performances in 2010 with Todd Rogers as the pair never finished lower than fourth with 11 overall medals in 12 FIVB World Tour starts.
With a 75-11 record together in 2010, Dalhausser and Rogers ended the season with five-straight gold medal finishes and a 25-match winning streak. Mol and Sorum have a current 20-match winning streak on the FIVB World Tour with three consecutive gold medal finishes together in Switzerland, Japan and Austria.
Since the start of FIVB sanctioned events in 1987, a total of 15 players have amassed more than $1-million in earnings and seven of those players will be in action this week - Dalhausser ($1,321,400) and Brazilians Alison Cerutti ($1,219,800) and Pedro Solberg ($1,061,813) on the men's side, and women's competitors Talita Antunes ($1,546,725) and Maria Antonelli ($1,017,750) of Brazil, and Kerri Walsh Jennings ($1,526,670) and April Ross ($1,174,975) of the United States. 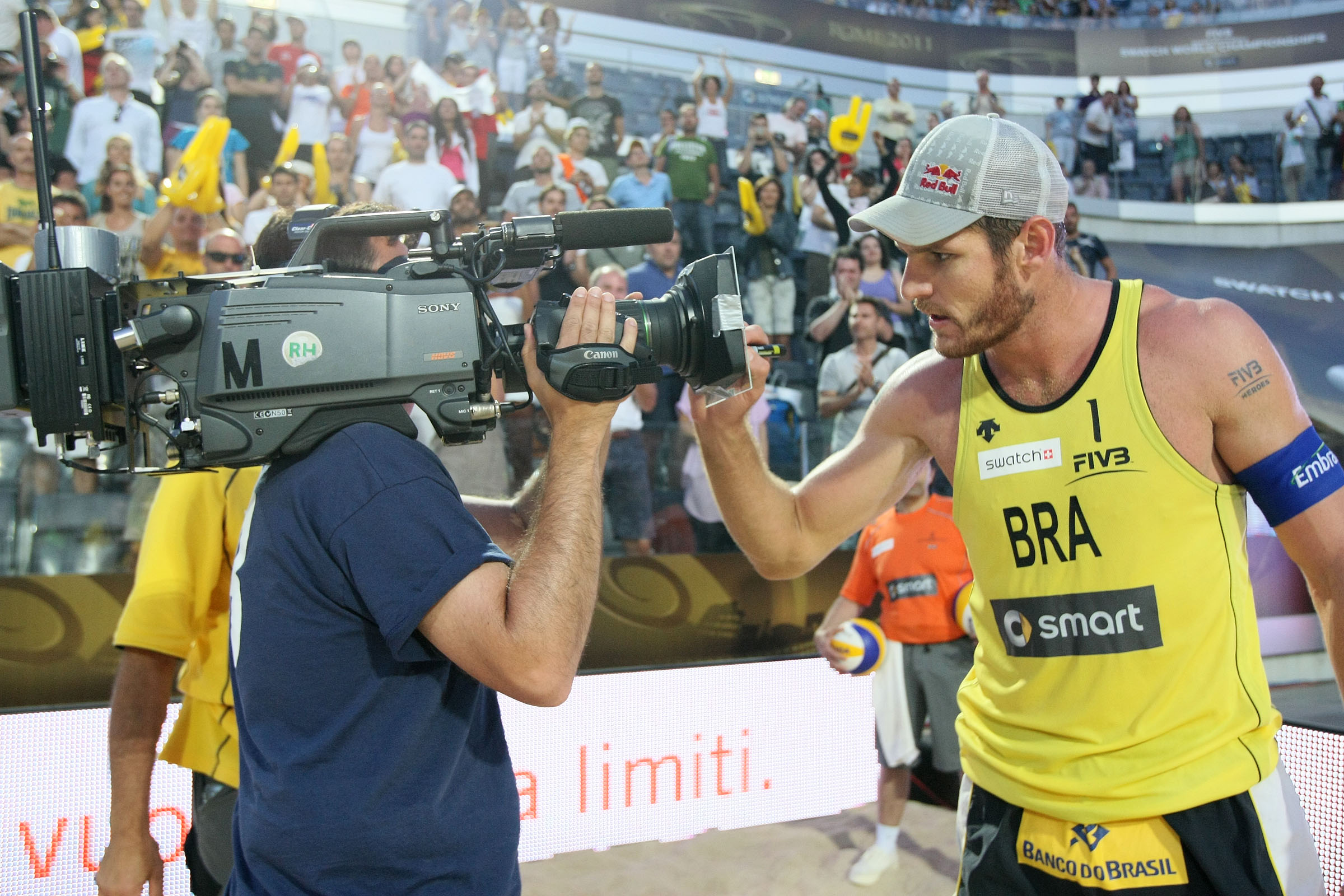 Alison Cerutti (right) captured a gold medal at the 2011 FIVB World Championships with Emanuel Rego at the Foro Italico.
Led by Walsh Jennings with 56 World Tour gold medals to rank second all-time on the women's list, six of the above-mentioned players have topped an FIVB podium 20 or more times. Dalhausser ranks third all-time on the men's list with 38 titles with Alison posting 28 career wins and Solberg 21. Talita is tied for fifth on the women's list with 34 titles while Ross is No. 8 with 25 gold medals.
Only 18 men's and women's players have participated in 170 or more FIVB events with seven being in action this week - Austrian Clemens Doppler (190th), Spaniard Pablo Herrera (181st), Greek Vasiliki Arvaniti (179th), Latvian Aleksandrs Samoilovs (178th), Brazilians Talita (178th), Carolina Salgado (175th) and Solberg (173rd).
Team-wise, Mol and Sorum are tied for 10th all-time in FIVB World Tour gold medals and can move into a three-way tie for eighth with the Brazilian pairs of Ze Marco de Melo/Ricardo Santos and Marcio Araujo/Fabio Magalhaes with 11 titles each. Samoilovs and current partner Janis Smedins have 13 World Tour titles together to rank fifth on the list with Roberto Lopes/Franco. 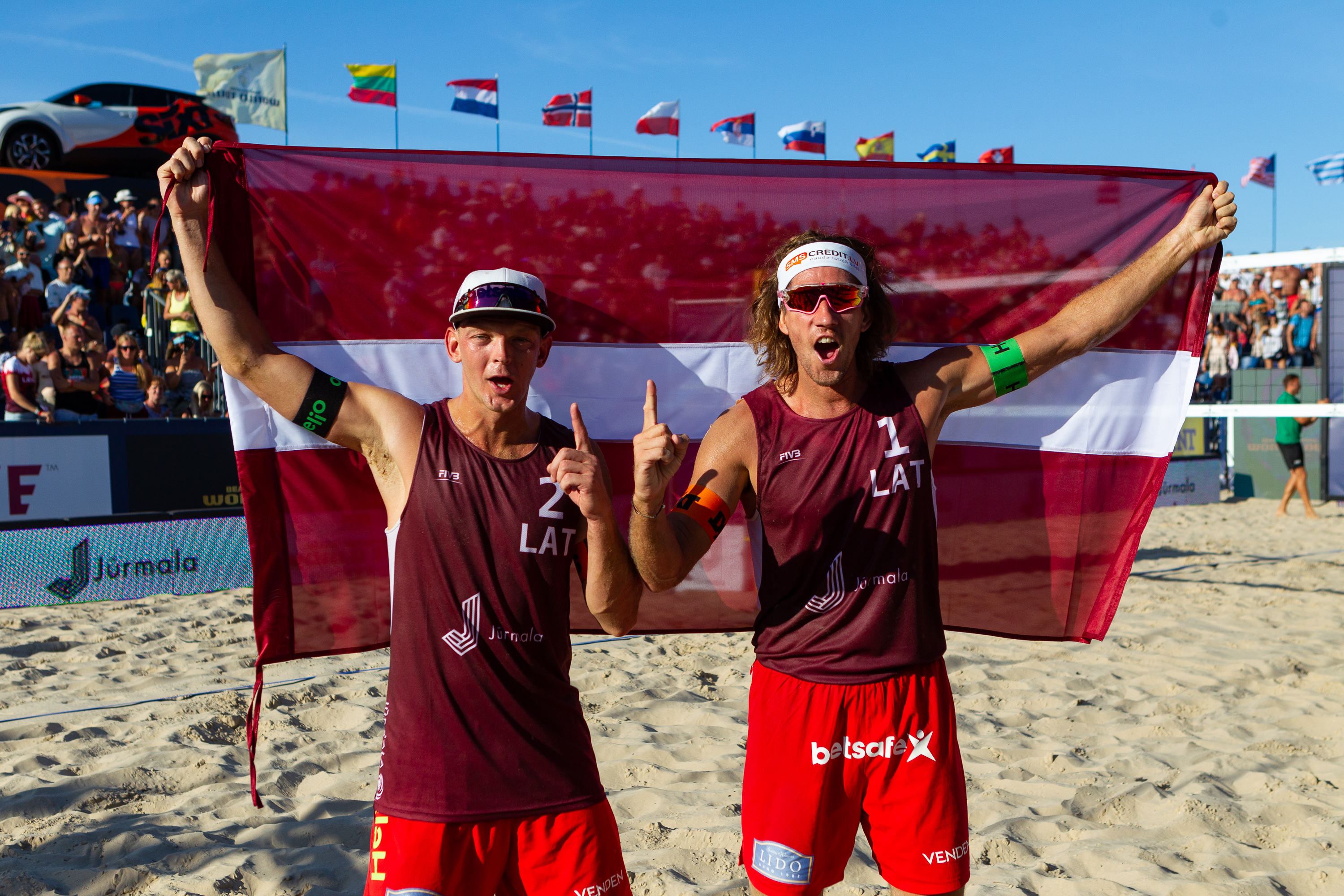 Janis Smedins (left) and Aleksandrs Samoilovs have captured two of their 13 FIVB World Tour gold medals this season.
Reigning FIVB world champions Melissa Humana-Paredes and Sarah Pavan have the most career wins together among this week's women's entries as the Canadians have captured six gold medals to rank 12th all-time. Humana-Paredes and Pavan have won three events this season highlighted by the July 6 gold medal win over Ross and Alix Klineman at the World Championships in Hamburg, Germany.
Talita and current partner Taiana Lima have five World Tour titles together along with compatriots Agatha Bednarczuk/Eduarda "Duda" Lisboa. Talita and Taiana's third of five gold medal finishes was in Rome during the 2013 season. Agatha and Duda's third of five titles was posted at last year's FIVB World Tour Finals in Hamburg, Germany.
Sixteen teams have compiled more than $1-million in winnings together with two of the men's pairs on the list in action this week - Herrera and current partner Adrian Gavira (No. 3 at $1,236,200) and Samoilovs/Smedins ($1,044,175). The Spanish team of Elsa Baquerizo/Liliana Fernandez rank No. 11 on the women's list with $886,350 in winnings together.
The Spaniards are also recognized as two of the more experienced teams ever on the FIVB World Tour. Gavira and Herrera's participation this week marks their 115th FIVB event together to tie them for fourth on the men's list with Canadians John Child/Mark Heese. Elsa and Liliana will also move into a fourth-place tie on the women's list at 120 FIVB appearances together to match the totals by the legendary Brazilian pair of Shelda Bede/Adriana Behar and Germans Katrin Holtwick/Ilka Semmler. 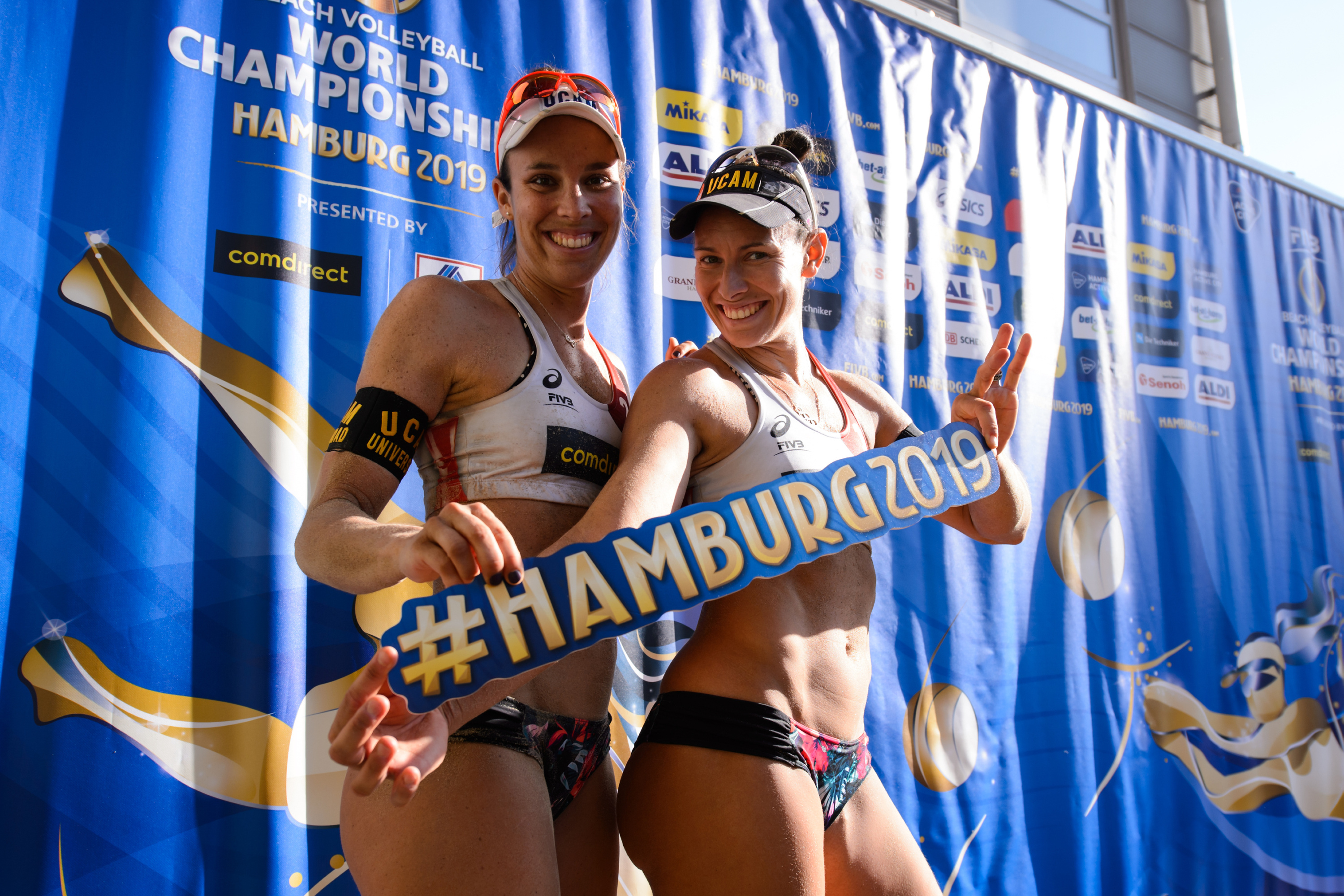