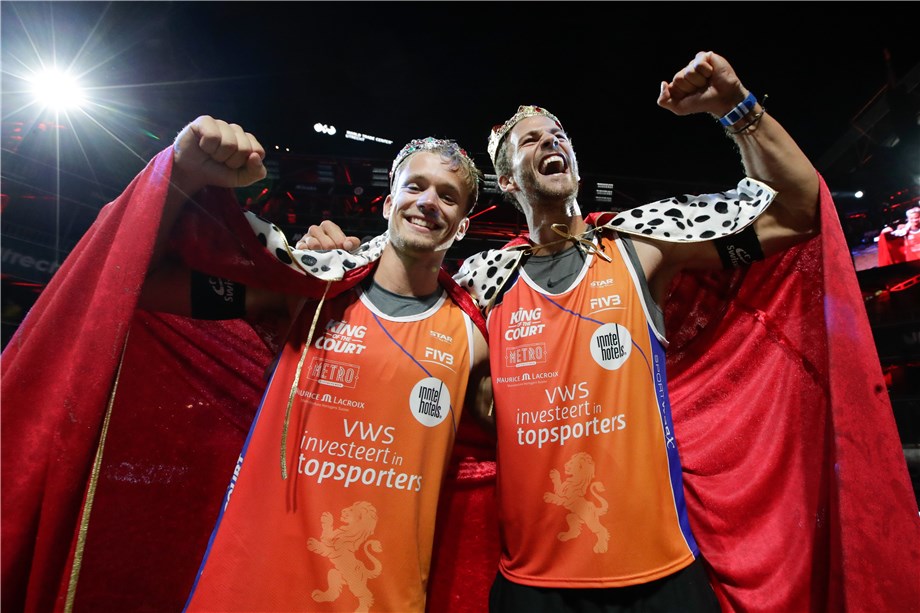 Florian Breer and Marco Krattiger celebrate their gold medal at the King of the Court competition last week in Utrecht.

Jurmala, Latvia, September 16, 2020 - King Of The Court hero Florian Breer is hoping that he and Marco Krattiger can take their ‘good vibes’ from their victory in Utrecht into the CEV European Championships in Jurmala this week.
The Swiss boys put in an incredible performance to surprise the world in Utrecht on Saturday evening, in a state of the art, socially-distanced arena. The result and performance is still sinking in for the right sided defender.
"For sure, it felt really amazing and we still can’t really believe it because we didn’t have a big expectation for the event," said Breer. "We just wanted to have fun and didn’t have a ranking that we wanted to achieve, so for us it was a really big to be in the final and we just wanted to show everyone what we can do and I think we did that and we are really proud of ourselves."
It’s a bright start for one of newest partnerships on the FIVB World Tour, Breer teaming up with Krattiger due to the retirement of Nico Beeler, Krattiger's former partner, and Breer is hoping that this result can give the team a platform to progress and push onwards and upwards in world beach volleyball.

“Sure it is probably the best start we could wish for with this partnership and it showed us that we can compete on a really high level, we played with some of the best teams in the world and that really gives us confidence for the European Championship this week and for upcoming events next year.”
The King Of The Court provided a thrilling competition format, five teams were governed by the clock and could only score points from the side out end, gradually knocking each other out in 15 minute rounds. This format is something that Breer feels worked for their team due to the fact it was fast and furious and other teams weren’t so used to lining up against them.
“I think the format of the competition was good for us because the top teams didn’t know us that good, as I have never played against them and a team like Mol/Sorum learn during the game and they couldn’t do that in the King Of The Court format.”
Due to the nature of the competition the young, quiet defender could serve with power and precision and a certain calmness that meant his serves lacked errors. A weapon the team would like to keep in their armoury moving into the European Championships.
“It was easy to serve strong there because we could take a lot of risk as we knew that the opponents wouldn’t get a point, and in the normal game this is difficult but I think it showed us what we can do from the serving line and we can take this risk in normal competition.”
The team like last week haven’t set any expectations for the European Championships but they have grown in stature and in confidence and teams around them will be taking them very seriously, even if Breer still believes they are the underdogs.


“We are really looking forward to the European Champs and it’s our last tournament for us and we don’t really have a goal we want to achieve. We have a tough pool and we are seeded 4th in that pool, so we should be the underdog in every match but we have a lot of self confidence now, we want to take those good vibes from King of the Court and show people what we can do in the normal beach volleyball format and if we can keep playing with the same confidence and with the same service pressure we can make a good result.”
The team will line up in pool H with Spain's Pablo Herrera and Adrian Gavira and also Adrian Carambula who is playing with temporary partner Jakob Windisch. Another chance for the team to grow, prepare and hopefully build for a busier season next year.
“Its a pool with big teams and I am looking forward to playing against them. It’s a good test and we are looking to seeing whether we can keep up with them in the normal format. So I’m pretty excited to give everything we have for the last time this season before we rest and have preparation for the next season. It’s great that we have had the chance to play these events before the start of next season as it gives us feedback and shows us what we can work on in the off season.”

The win in Utrecht was Breer’s first at senior international level after a seriously impressive junior record including a victory in the World U17 World Championships in Acapulco and a string of other impressive results with Yves Haussener, the pair always impressing with their ball control and ability to run fast, aggressive offensive plays. But the step up to senior level is never easy in this sport.
“I played a lot of age-category competitions, most of them with Yves Haussner and I think a big difference is the constant high level. At junior level, teams make good plays but are not this consistent and it took time for me to adapt to this level. I think it is way more difficult to side out at senior level, the block defence is much tougher and so is the service pressure.”
It looks as if Breer’s ability to adapt to the senior game is on a good course, his new relationship with Krattiger has great potential to be successful and he doesn’t feel that going back to playing the normal rules will be tough. But he isn’t getting complacent with last week's victory.
“I don’t think it will be difficult to adapt back to beach volleyball. Winning last week doesn’t mean we will beat the best teams in the world just because we did at King Of the Court, but we will give our best at the European Champs."
One thing is for sure, last week Florian Breer and Marco Krattiger won the hearts of the fans and respect of the biggest names in world volleyball and if they can keep their ‘good vibes’ going then who knows what they can achieve this week or in the future.
Quick links:
King of the Court 2020
FIVB Beach Volleyball World Tour
Olympic Games Tokyo 2020
Facebook
Twitter
Instagram
Youtube