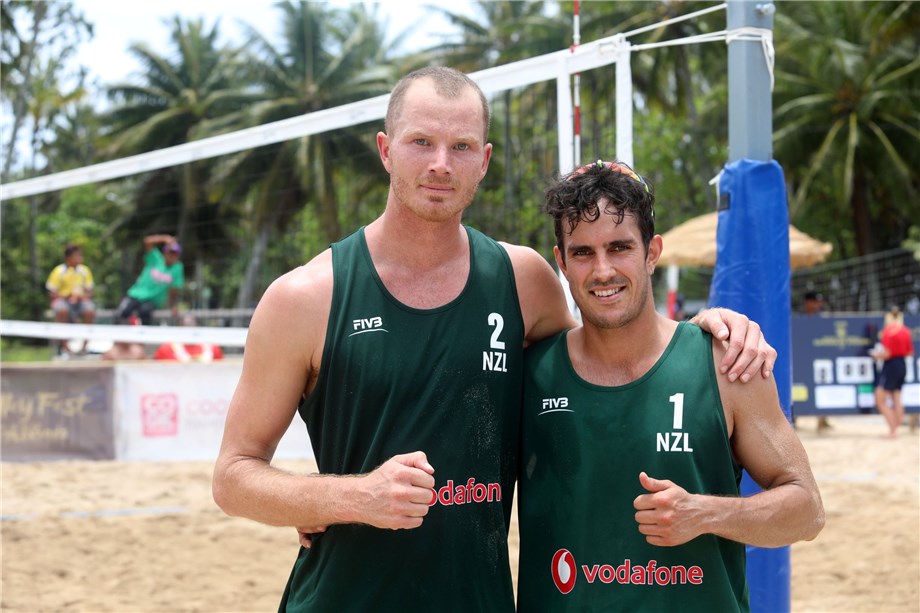 In the seventh event on the 2019-2020 FIVB World Tour men's calendar, the seventh-seeded Muller and O'Dea ousted Australia rivals and 11th-seeded Isaac Kapa/Glenn Piper in two sets to advance to an international final four in their first event together.
Muller and O'Dea are the first New Zealand team to appear in a World Tour semifinal since March 2018. O'Dea and his brother Ben finished fourth at an FIVB event in the Netherlands on March 18 in Aalsmeer. Muller is competing in only his second World Tour event and Sam O'Dea is participating in his 27th highlighted by a March 2017 bronze medal with his brother at an FIVB stop in Shepparton, Australia.
Earlier on Thursday afternoon, third-seeded qualifiers Hitoshi Murakami/Takashi Tsuchiya of Japan gained their second FIVB World Tour semifinal berth this season. Murakami and Tsuchiya placed fourth in the 2019-2020 season opening event in Iran last October at Bandar Torkaman.
The American tandems of fifth-seeded Travis Mewhirter/Adam Roberts and ninth-seeded Christopher Austin/Earl Schultz also secured FIVB semifinal berths for the first time together. Austin and Schultz are playing in their second World Tour event and Mewhirter and the 43-year-old Roberts in their first international tournament together.
All four teams are undefeated with 3-0 match marks in the VolleyFest Cook Islands after each won their pools on Wednesday to advance to Thursday's quarterfinals. The Americans will be seeking the second gold medal for the United States this season after Taylor Crabb and Jake Gibb topped the podium at November's stop in Chetumal, Mexico.
Quick links - Beach volleyball:
FIVB Beach Volleyball World Tour - Cook Islands
Facebook
Twitter
Instagram
Following the VolleyFest Cook Islands, the men's FIVB World Tour takes a break for a month before resuming action from February 20 to 23 in Phnom Penh, Cambodia. The first women's event during the 2020 calendar year is set for February 6-9 at Siem Reap, Cambodia.