Klineman and Ross back to defend Hague gold 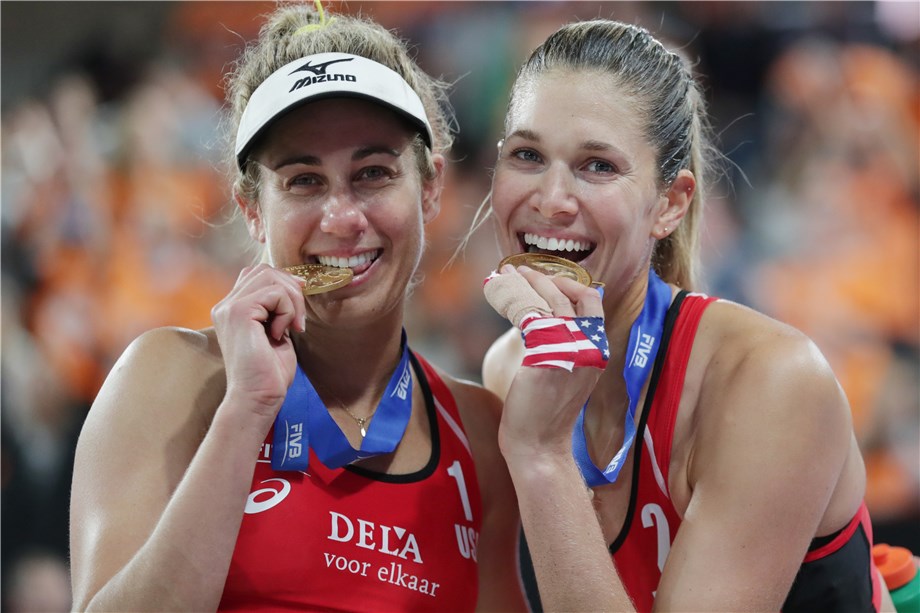 Lausanne, Switzerland, December 12, 2018 – Alix Klineman and April Ross will aim to repeat their 2018 performance when the 2019 side of the 2018-19 FIVB Beach Volleyball World Tour begins with the 4-Star DELA Beach Open in The Hague that will run from January 2-6.
Klineman and Ross marked the first week of 2018 by going from the qualifiers to top of the podium in their first tournament together when they defeated Brazil’s Carolina Solberg and Maria Antonelli 2-0 (21-12, 21-15) in the gold medal match.
Quick links - Beach volleyball:
FIVB Beach Volleyball World Tour DELA Beach Open
FIVB.com - Beach volleyball
Latest Videos
Facebook
Twitter
Instagram
In October they won their second World Tour gold at the Yangzhou 4-Star in China to round off their first year together.
Carolina and Maria Antonelli won’t be competing in The Hague, but bronze medallists Tanja Huberli and Nina Betschart will.
The Netherlands will be represented by seven teams. At the 2018 tournament Sanne Keizer teamed up with Madelein Meppelink to mark her full return to beach volleyball after becoming a mother, and later in the year they won gold at the CEV European Championships and a silver and bronze on the World Tour.
In the men’s competition there will be new champions as Latvia’s Martins Plavins and Edgars Tocs haven’t entered.
Their fellow Latvians Aleksandrs Samoilovs and Janis Smedins are one of two Latvian teams and they will be aiming to build on their finish to the 2018 season when they won gold at the Moscow 4-Star and silver at the European Championships.
Samoilovs and Smedins are ranked second, behind the team that denied them European gold, Anders Mol and Christian Sorum.
The Norwegians enjoyed a breakthrough year in 2018, and ended the year with Hamburg 2018 FIVB World Tour Finals gold, three World Tour golds and a first European title.
Brazil will send three men’s teams, one of which will be aiming to build on successes of their previous year as a team.
Bruno Schmidt and Pedro Solberg made their names together when they won the 2006 FIVB U21 World Championships. In 2013 they teamed up at senior level and finished second in the FIVB World Tour having won two gold medals together.
In 2014 Bruno was paired up with Alison Cerutti to devastating effect and they won gold at the Rio de Janeiro 2016 Olympic Games, the Netherlands 2015 FIVB Beach Volleyball World Championships and Toronto 2016 FIVB Beach Volleyball World Tour Finals.
They went their separate ways midway through 2018 and after Bruno and Pedro reunited they played seven World Tour tournaments together with a quarterfinal place at the Vienna 5-Star their best finish. Pedro (left) and Bruno won two golds together in 2013
The event is the 12th in the ongoing 2018-2019 season and will be played at the Sportcampus Zuiderpark. It follows on from another indoor event in Slovenian capital Ljubljana.
To order tickets for the DELA Beach Open click here.