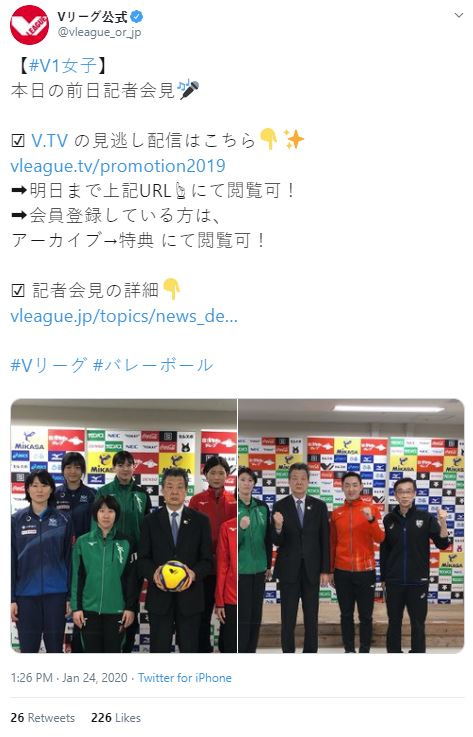 In the first match of the semifinals on January 25, Denso faced Okayama. In the regular season, the Airybees had taken the season series 2-1. Okayama jumped out to an early lead in the first set, but Denso fought back to even the score at 20. The Seagulls were able to take the set 26-24 after a Shuka Kaneda spike. In the second set, Okayama had an 11-10 lead and then stood on the gas pedal with a 15-4 run to end the set 25-14 with a 2-0 sets lead. Denso had their backs against the wall and answered by winning the third set 25-19, down 1-2 on sets. The fourth set was tight throughout, but the Airybees just got a late two-point gap. A spike by Denso’s Sinead Jack gave the Airybees the set at 25-23 and tied the match at 2-2. In the fifth set, Denso had no reply for the Seagulls' offense and defense and Okayama won the set 15-7 and the match 3-2.
Kaneda finished with 28 points all on spikes and Moe Sasaki contributed 21 (19 spikes and 2 blocks) in the Seagulls' victory. Jack finished with 23 points (20 spikes, 2 blocks and an ace) in the loss. 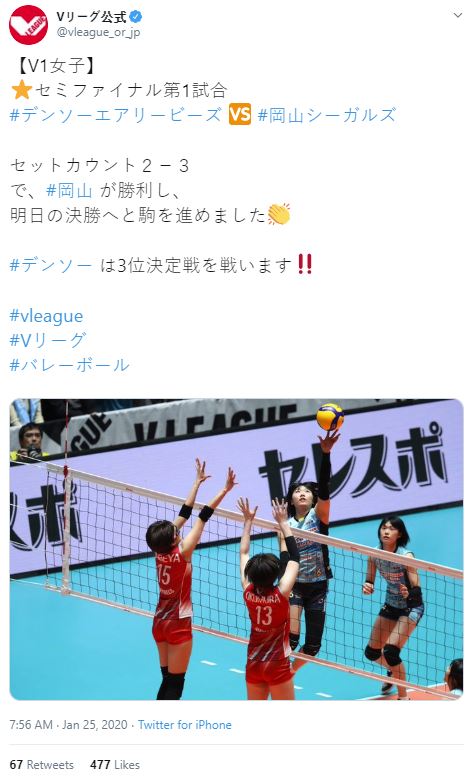 In the second match of the semifinals, JT Marvelous faced Saitama. In the regular season JT had taken the season series 2-1, but two matches did reach five sets and were split 1-1. So, the expectation was for a close match. In the first set, the Marvelous took the reigns early forcing Saitama to call a time out down 2-6. JT continued their push and coasted to win the set 25-16. The second set was very similar to the first for the Marvelous and with the 25-18 set score, the Marvelous looked like they were in charge with the match up 2-0 on sets. The third set was much closer and JT had to call a timeout at 22-21 to stop Saitama from tying the score. The timeout worked as JT were about to end the set 25-22, the match 3-0 on sets and advance to the final. Annie Drews of the Marvelous led all scorers with 23 points (21 spike and 2 aces) and Saitama’s Katarina Barun Susnjar led her team with 17 points (all spikes). 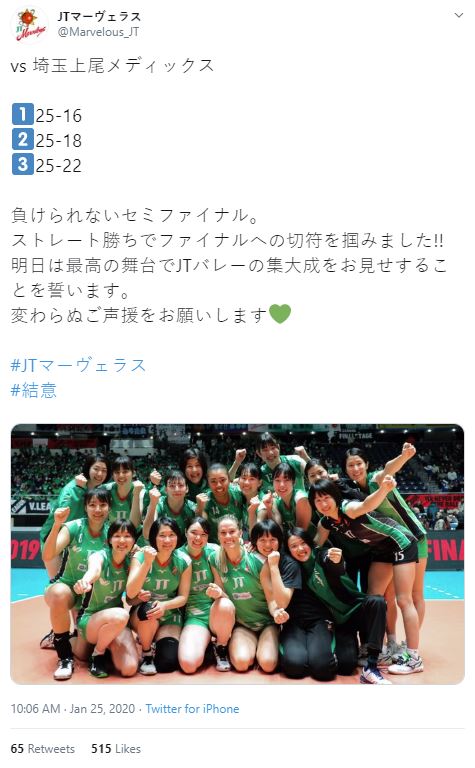 Moving on to the matches on Sunday, January 26, the third place match between Denso and Saitama was won in a 3-0 sweep by the Medics. Saitama’s Alyja Santiago, known by her nickname Jaja, had 24 points (22 spikes and 2 blocks) in the win. Denso’s Jack had 13 points, with 6 blocks and an ace in the losing effort. 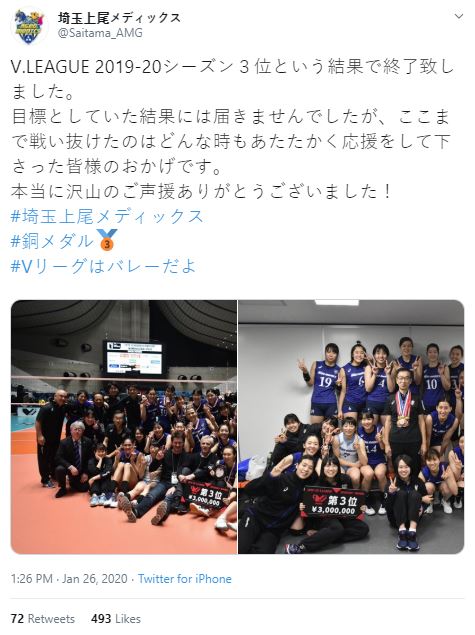 The championship match between the Marvelous and Okayama would have three Japanese women’s national team players from 2019, Mako Kobata and Aika Akutagawa for JT and Haruka Miyashita for Okayama. Okayama had never won a championship in its history, and JT Marvelous had not been able to celebrate their 2010-2011 title on the court as the Great Tohoku Earthquake had ended the season early. The Marvelous had the best record in the league in the 2010-2011 season when the earthquake happened and they were declared champions. Still the Marvelous were looking for their second championship. 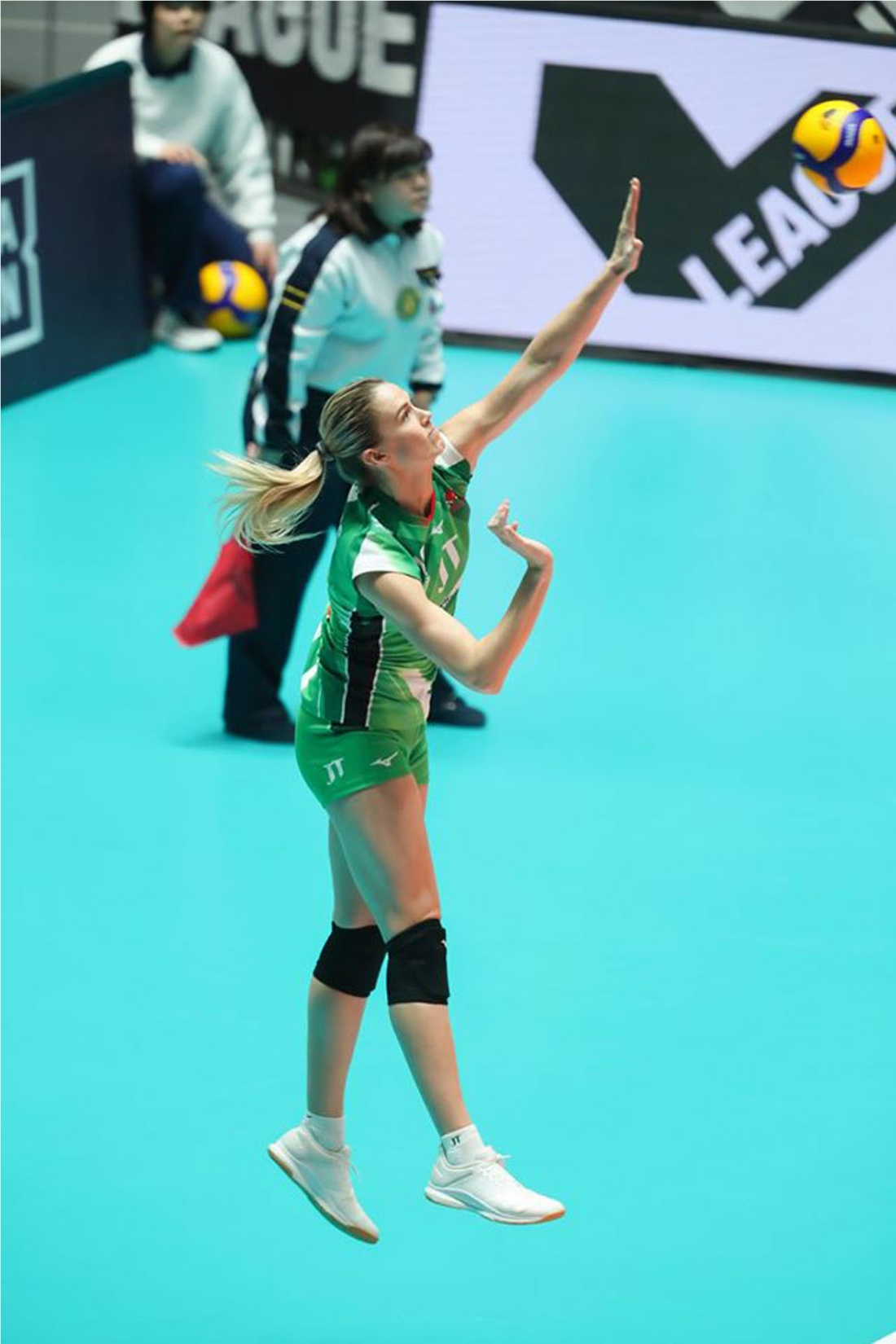 Annie Drews serves for JT Marvelous
In the first set, JT got out to a gap of four points, and maintained that gap to win the set 25-22, taking a 1-0 set lead. The second and third sets were both very close with the Seagulls winning both sets 26-24 and 25-23 to take a 2-1 sets lead. The fourth set started with counter punches by both teams until it was 8-8. Then the Marvelous just dominated with a 17-6 run to finish the fourth set, 25-14 to tie the match at two sets all. In the sprint to 15 points in the fifth set, the Marvelous kept the momentum going forcing the Seagulls to use both their timeouts by the side change at 8-3. JT kept on pushing and finished the match with consecutive aces from Mika Shibata to win the set 15-7 and the match 3-2. When holding the championship plate at the end of the match Marvelous captain Mako Kobata was in tears. Kobata was named the league’s best libero as well after the match. As had been the case for the season, Annie Drews was nearly unstoppable for the Marvelous with 36 points, 33 spikes on 67 attempts, plus 2 blocks and an ace. Drews was named the MVP for the season and was also placed on the league Best 6 Roster. Okayama’s Sanae Watanabe led her team with 21 points in the final and teammate Shuka Kaneda won the league’s Fighting Spirit Award. 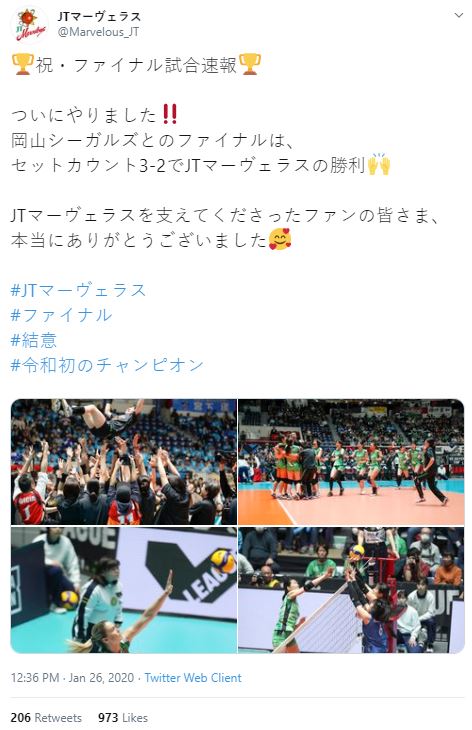 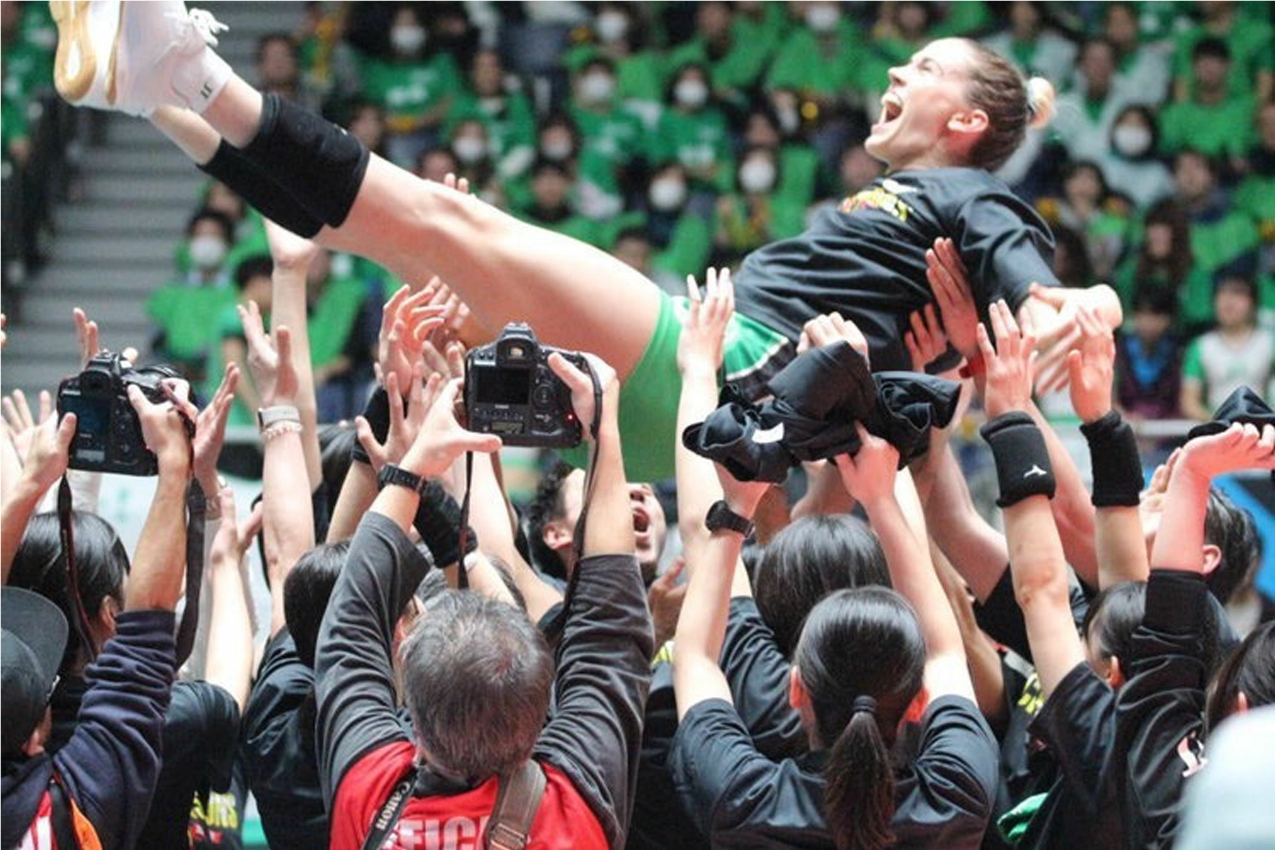