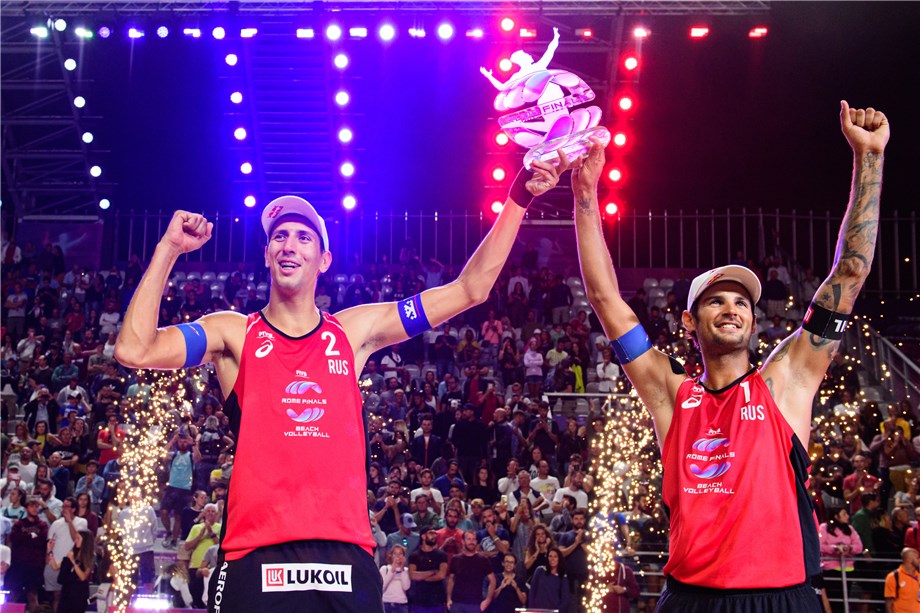 Quick links - Beach volleyball:
FIVB Beach Volleyball World Tour Finals - Rome
Facebook
Twitter
Instagram
YouTube
Thole and Wickler split $32,000 for placing second as the Germans finished the 2018-2019 FIVB World Tour with two-straight podium placements after claiming a bronze medal three weeks ago at the Moscow stop where Krasilnikov and Stoyanovskiy finished ninth.
“We have played them in two finals before and we knew they were a really good team,” said the 22-year-old Stoyanovskiy.  “They are a great side out team, and they served really well in this tournament.  We played really well overall but the key for us was to keep our side out solid.”
Stoyanovskiy added that “when we first got together last year, we couldn’t imagine we would win the two most important tournaments of the season.  I’m happy and it’s great to see that we played at our best in the most important moments.”
In the men’s bronze medal match, second-seeded Norwegians Anders Mol and Christian Sorum erased the memories of Saturday’s late night lost to Krasilnikov and Stoyanovskiy to score a 2-0 (21-16, 21-15) win in 35 minutes over 17th-seeded Taylor Crabb and Jake Gibb of the United States.
The world’s No. 1-ranked team, Mol and Sorum shared the $20,000 third-place prize gathering their 10th podium placement together this season and 14th overall.  Crabb and Gibb, who are now winless in three matches with the Norwegians on the FIVB World Tour, split $16,000 for finishing fourth.
We’re really happy with the bronze right now,” said Sorum.  “There’s a big difference between a fourth and a third and we like to have medals so when you play a medal match you have to do your best. We’re super happy with the bronze.”
Mol said he was “a little bit sad because it’s nice to see the volleyball family and we won’t see them for a long time. It also feels good to have vacation. We’ve been playing since May this year. Our bodies are getting tired and now we just look forward to next year.”