Krasilnikov: I’ll build a court and teach my neighbours how to play 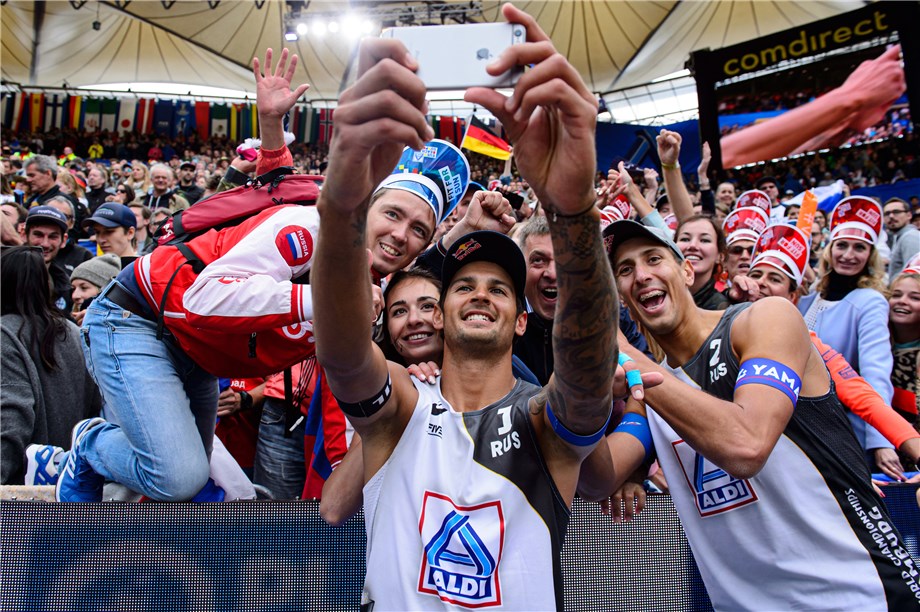 Saint Petersburg, Russia, May 21, 2020 – “If this continues for long, I’ll build a court and teach my neighbours how to play,” reigning world champion Viacheslav Krasilnikov joked to express how much he misses beach volleyball while also making the best of his time during the coronavirus lockdown and enjoying the company of his family.
“I am longing to play. I really want to quickly go out to the sand and feel tired after a good workout. This is the exact first thing I want to do after the quarantine,” the 29-year-old Russian athlete said, not to say that he is not enjoying the fact that this was the first time in many years he got to celebrate his birthday at home, with his loved ones, and not at a beach volleyball tournament or training camp.
“’Be careful what you wish for!’ I understand the meaning of this phrase very well now. I thought about taking a vacation after the Olympics to restore my health, to unload mentally, and be with my family. So I got everything I wanted, but in a slightly different context,” said Slava Krasilnikov. “There is an opinion that beach volleyball is like a holiday - sand, sea, sun. But try to play at least one regulation game or conduct a full training session, and you will quickly forget this myth.”
For Krasilnikov and his family, home is a countryside house outside Saint Petersburg where they have been enjoying each other’s presence during the time of pandemic. The 1.96m-tall beach volleyballer is particularly delighted to spend time with his two-year-old son, play games with him and watch him grow.
“It's great to be with my son, to see his emotions, to watch him grow up and develop... I try to use this time to communicate more with my wife and the rest of the family,” Krasilnikov said, explaining that by a stroke of luck his parents were also ‘stuck’ with them during the lockdown.
His father, who is an engineer, has helped him with a number of home improvement projects, stopping just short of building a beach volleyball court to play with the neighbours. In his yard Slava has been doing some digging of a different kind from what he is used to. He has been trying to learn English as well, taking online classes to improve his language skills.
“I’m not used to sitting still for a long time, but this period with my family is very valuable and I enjoy every day of it. Love each other! Appreciate this time you get to spend with your family,” Krasilnikov said. “And don’t be lazy, because laziness is our enemy.”
And Krasilnikov certainly has not been lazy.
“There is a mini gym in the garage, where I keep fit,” he explained. “I bought myself some training equipment, because it's difficult without a training facility. To work with the ball, I installed a board at a convenient angle on the fence. The conditions aren’t perfect, but it’s better than nothing. I train and keep a diary of my physical condition. The lack of sand and competitions works against us, but now we communicate with the coaches, watch videos, analyse games, always aiming for perfection. I receive daily training programmes and try to execute everything as much as possible.” 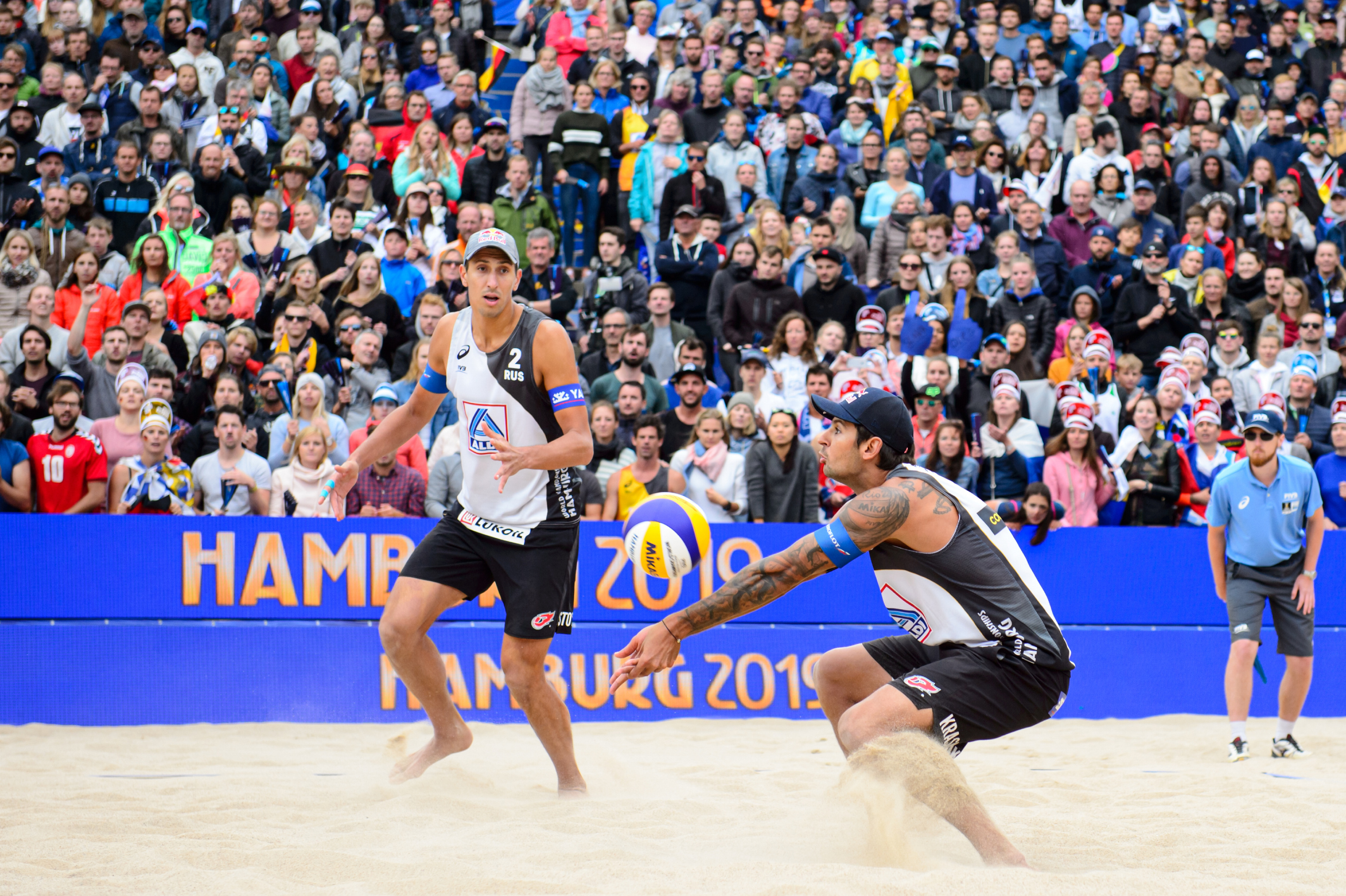 Krasilnikov in action during the 2019 World Championship final
Krasilnikov won his first FIVB Beach Volleyball World Tour gold at the Moscow Grand Slam in 2014, with Konstantin Semenov. Two years later, the pair reached the semifinals of the Rio 2016 Olympic Games. In 2017, Krasilnikov added two more World Tour podium tops alongside Nikita Liamin, before teaming up with Oleg Stoyanovskiy and earning four gold medals in 2019, including those at the FIVB Beach Volleyball World Championship in Hamburg and the World Tour Finals in Rome.
Viacheslav and Oleg were gearing up to continue their success at Tokyo 2020 when the virus struck, and the two partners were forced to self-isolate and split physically, unable to train together.
“Of course, I am in contact with Oleg. For him, in Moscow, it was even more difficult, so he also went to the countryside, where he has better opportunities to do some jogging, to stay in shape,” Krasilnikov said. “The specifics of his workouts require more outdoor activities, while for me it is more about exercising at the gym, with the iron. I also keep in touch with some of the players from other countries and they are all finding their ways to cope with the situation - some are practicing, some are sitting at home, some are playing volleyball with the home folks.”
Slava received the news about the postponement of the Olympics by a year with mixed feelings.
“We were preparing for the Olympic Games, we were gaining form, we were gaining muscle mass in order to feel in good shape in Tokyo. And now all this is going to waste,” he said. “I was dreaming about it. I was imagining how we would perform there. I was dedicated in training. It's a shame... But, given the situation in the world, I think it was logical to postpone the Games, because it was not at all clear how things would turn out. It was the right decision. We are all in the same situation. Now it is important to protect our loved ones and wait out all the fuss.”
Based on excerpts from Viacheslav Krasilnikov’s online video chat with the official YouTube channel of the Russian federation and interview for sport-express.ru
Related article:
Stoyanovskiy patiently awaits return to the sand
Quick links:
FIVB Beach Volleyball World Tour
Facebook
Twitter
Instagram
Youtube