Krou and Rowlandson arrive at Sydney more confident than ever 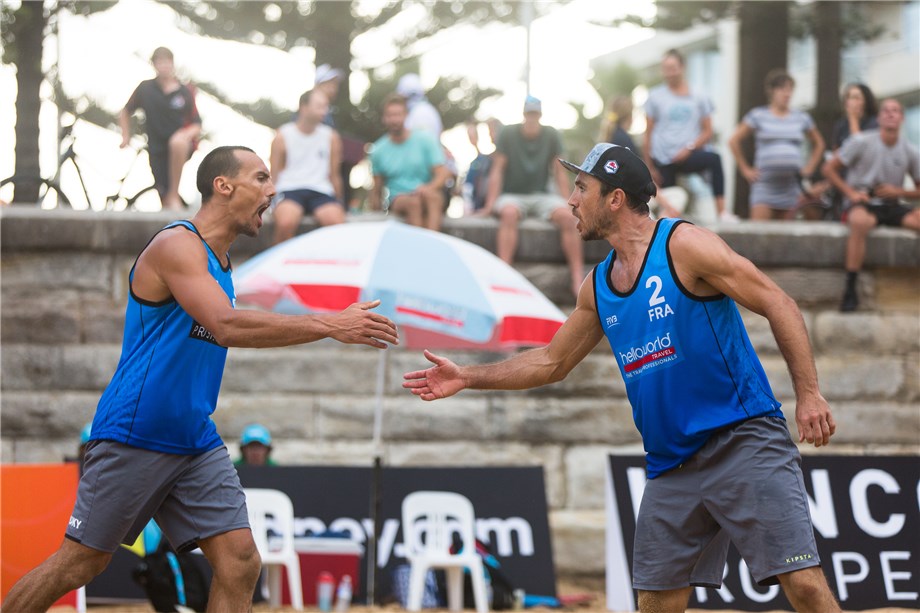 Sydney, Australia, March 6, 2019 – Youssef Krou and Edouard Rowlandson renewed their partnership on the FIVB Beach Volleyball World Tour in October last year and the French pair is feeling more confident than ever as they compete at the 3-star event in Sydney this week.

The Frenchmen’s last World Tour event together was at the Hamburg Major in 2016 and after that Krou continued to played with Quincy Aye while Rowlandson returned only in 2018 for the Montpellier 1-star with Olivier Barthelemy.

“Eddy decided to start playing beach volleyball again and since he always wanted to play with me, the national federation decided to give us a new coach, Lissandro Carvalho, who will help us with our campaign for Tokyo 2020 and Paris 2024,” Krou said.

They saw action in a 3-star event in Qinzhou and three 4-star events in Yangzhou, Las Vegas and The Hague. Even though they did not reach the podium in these four tournaments, they started to build up on their confidence as they work on their campaign to qualify for the Olympic Games.

“Youssef and I are definitely feeling that we can be one of the best teams in the world,” Rowlandson said. “We are now 100 per cent confident about it. This is probably something that we didn’t realise when we competed together two years ago in the qualification for the Rio 2016 Olympic Games. It was so close – we missed it by two spots – but now we’re back on the court together, we are just aiming to go as high as we can.”

Rowlandson has seen improvement in their performance and increased maturity in their game.

“We are still a young team for beach volleyball. But we are less emotional now than the younger players. Obviously there are great teams like the team from Norway [Anders Mol and Christian Sorum], who are very young but very mature for their age. For me and Youssef, we have entered that phase in our careers when we can reach our strongest potential in beach volleyball.”

Krou believes that there is still room for improvement in terms of communication to achieve their Olympic goal.

“There is definitely a growing sensation that we need to work on our communication with each other and how we react to different situations,” he said. “It will be vital because it’s a bit tougher now and we have to work our way up. In the past we earned a lot of points and it was easier for us to move to the next round, but right now we are starting over and playing in difficult tournaments like this one for the Olympic qualification.”

In the qualification round, the pair started with stunning straight-set wins against Brazil’s Marcio Gaudie and Harley Marques Silva and Canada’s Liam MacNeil and Gabriel Burlacu to qualify to the main draw.

“These were tough games and we are happy with our performance,” Krou said. “We stayed calm and focused and we feel that we have to continue playing like this if we want to progress in the tournament.”
Quick links - Beach volleyball:
FIVB Beach Volleyball World Tour - Sydney
FIVB.com - Beach Volleyball
Latest Videos
Facebook
Twitter
Instagram