Tokyo, Japan, February 18, 2020 - The Japanese Men’s V1 League is entering the Final Stage playoffs after a 27-game long regular season. Each of the ten teams in the league faced each other three times and the top five teams make the playoffs.

Tokyo, Japan, February 18, 2020 - The Japanese Men’s V1 League is entering the Final Stage playoffs after a 27-game long regular season. Each of the ten teams in the league faced each other three times and the top five teams make the playoffs. 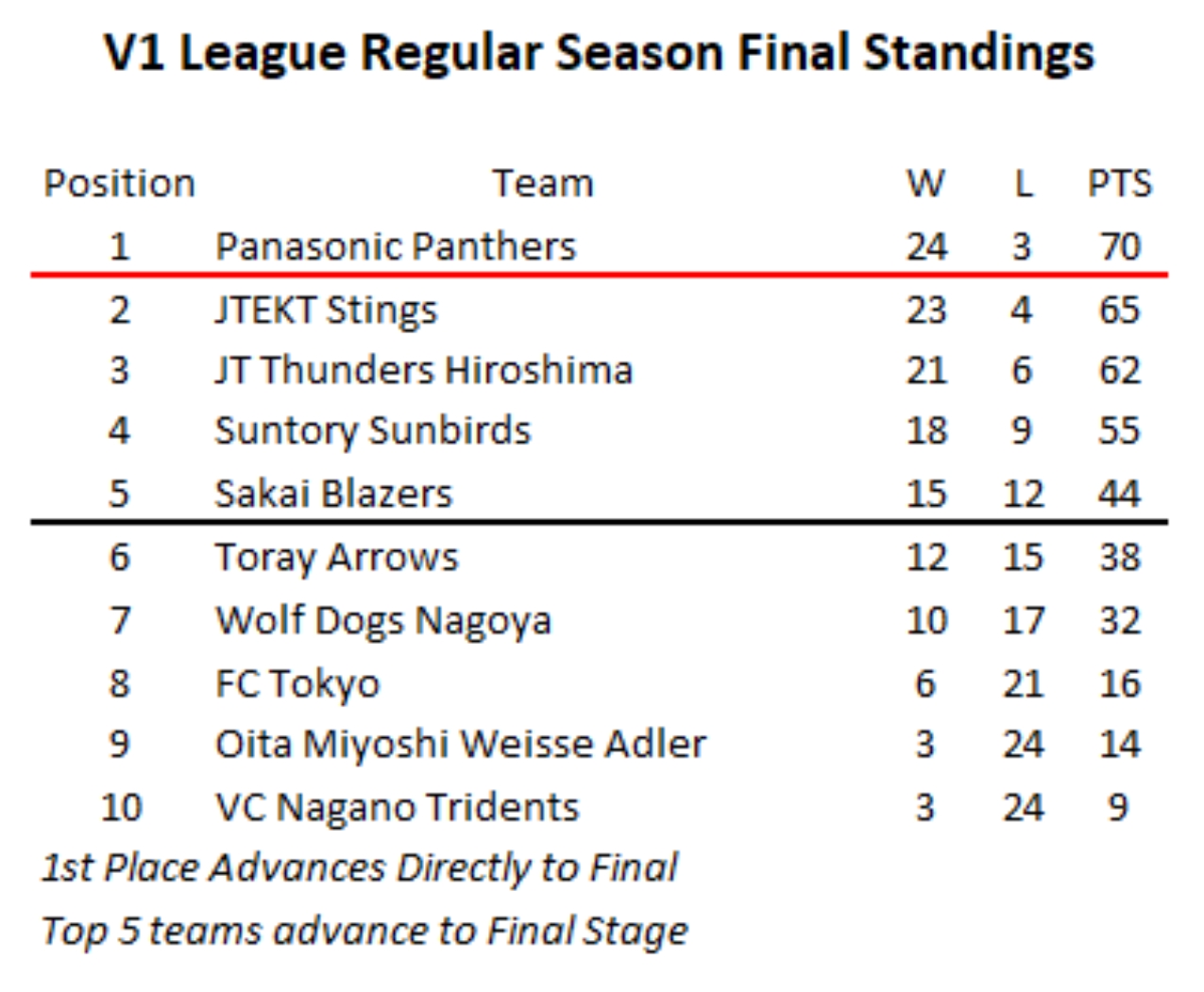 Straight set wins over JTEKT Stings and FC Tokyo on February 8 and 9 respectively, enabled the Panasonic Panthers to clinch the best record of the regular season at 24-3. The two-time defending champion Panthers are led by Kunihiro Shimizu and Poland’s Michal Kubiak who have provided a potent 1-2 punch on offense. By being the team with the best record at the end of the regular season, the Panthers are placed directly into the Final and won 3 million yen ($27,300) in prize money for the regular season title. All three of the Panthers' losses have come against playoff teams. 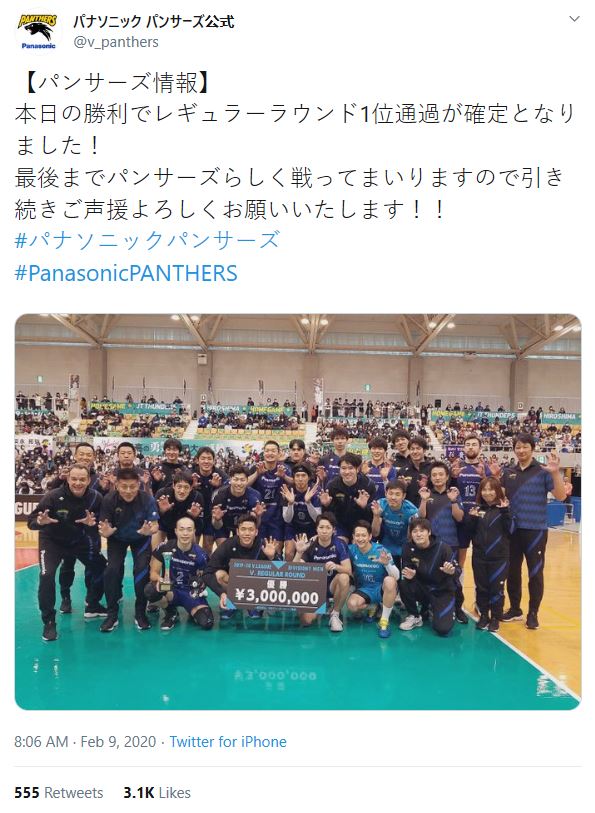 JTEKT Stings finished second with a record of 23-4. The Stings have never won the league and title and this year’s team has been the best in the team’s history. Yuji Nishida and Matey Kaziyski were both difficult to receive from the service line as the Stings led the league with an average of 1.65 aces per set. Nishida and Kaziyski’s serving combined for 125 aces and no other team in the league had more than 120 aces. In addition, Chinese middle blocker Shuhan Rao was second in the league for spike efficiency at 60.2%. Against other playoff teams the Stings are 8-4 and two of those loses were against Panasonic in straight sets. 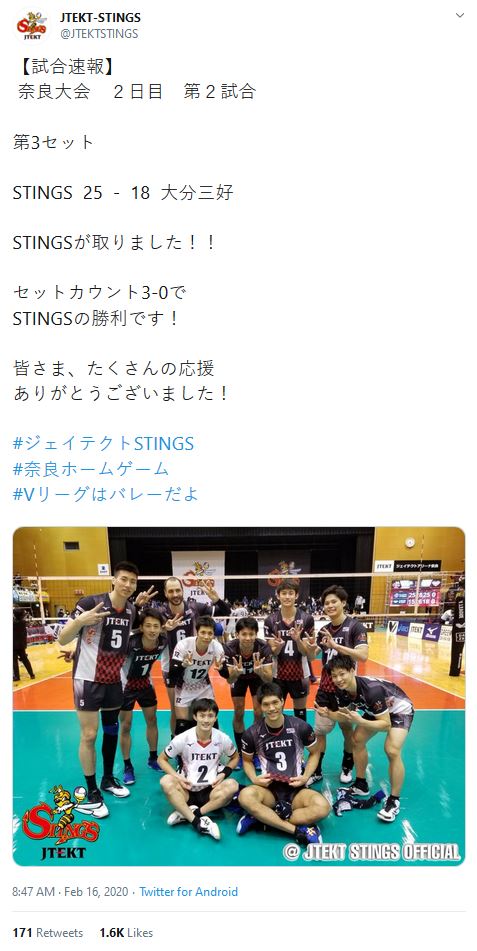 JT Thunders Hiroshima finished third at 21-6 and were led by the 212 cm tall Australian Thomas Edgar. With Edgar and middle blocker Taishi Onodera’s help, the Thunders were the best spiking team in the league with a 54.3% success rate. The Thunders may get a benefit in the playoffs as the first weekend matches will be played in Fukuyama, Hiroshima Prefecture, only a 30-minute bullet train ride from their base in Hiroshima. Against the other playoff teams, the Thunders have a record of 6-6. However, they lost all three matches versus JTEKT. The Thunders have not won a title since the 2013-2014 season, which was their first and only championship.

In fourth place were the Suntory Sunbirds at 18-9. Russian 2012 Olympic gold medallist Dmitriy Muserskiy led the Sunbirds in both scoring with 570 points and blocking with 0.54 blocks per set. As a team the Sunbirds led the league with 2.67 blocks per set. Suntory have a 5-7 record against the other playoff teams. The Sunbirds have won the league seven times, but their last title was in 2006.

In fifth place are the Sakai Blazers with a record of 15-12. Sakai in January were looking like they would not make the playoffs, but with five straight wins the Blazers clinched their playoff berth. An additional two wins this past weekend extended their win streak to seven. Puerto Rican Maurice Torres led the Blazers in scoring this season with 483 points. Sakai has had difficulty against the other playoff teams with a dismal 2-10 record. However, wins over JTEKT in five sets and a sweep of Suntory are part of their current winning streak. The Blazers have been champions 17 times (including their days as Nippon Steel) in the league but have not won the title since 2012.

Unlike many leagues with best-of-three or best-of-five series, the V1 League will have a stepladder format for this season. It is a four-round format, with four matches to be played.

The winner of the semifinal will then face Panasonic at the Takasaki Arena in Takasaki, Gunma Prefecture in the final on February 29.

Lastly, the V.League awards its statistical best player awards at the end of the regular season and JTEKT’s Nishida was the best scorer with 645 points. Nishida also won the best server award with 70 aces. JT Thunders’ Hiroshima Taishi Onodera was the best spiker with a 65.7% success rate. Onodera also was the best blocker as well with an average of 0.74 blocks per set. Suntory’s Taiki Tsuruda was the best receiver.