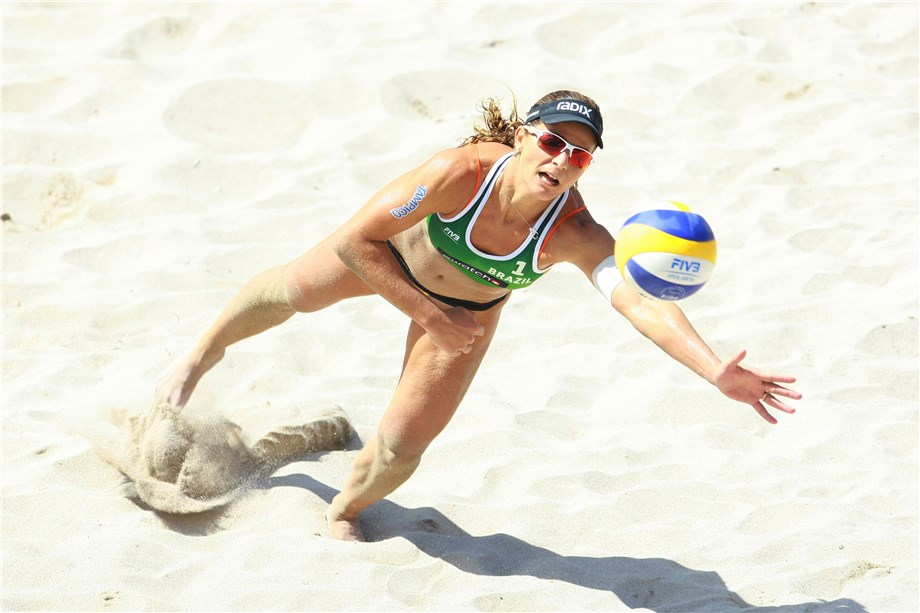 Larissa last picked up the Most Outstanding Player award in 2006

Lausanne, Switzerland, October 15, 2015 – Continuing to add to her legacy, Brazil’s brilliant Larissa Franca topped another amazing season on the FIVB Beach Volleyball World Tour 2015 by being voted the winner of three season awards including the women’s Most Outstanding Player.
Joining Larissa in receiving the special season awards announced today by the FIVB are Brazil’s Talita Antunes (Larissa’s teammate) with two awards, while Brazil’s Agatha Bednarczuk, Brazil’s Barbara Seixas, Germany’s Laura Ludwig, Canada’s Sarah Pavan, Canada’s Heather Bansley, Netherlands’ Marleen Van Iersel, Vanuatu’s Linline Matauatu, Vanuatu’s Pata Miller, USA’s April Ross and Finland’s Taru Lahti each received one award for the 2015 season.
In voting by players, coaches, referees and officials on the popular international pro beach volleyball circuit, Larissa, 33, was selected as the women’s 2015 FIVB Most Outstanding Player for the second time and as well as being honored in 2015 as the FIVB Best Offensive Player and Larissa and Talita as a team won the inaugural Swatch FIVB World Tour Finals. It was the second FIVB MOP award for Larissa and first since 2006. Larissa is the all-time leader with 57 FIVB career gold medals.
Brazil’s Larissa/Talita duo won seven of the nine FIVB tournaments they played in during the 2015 World Tour as well as setting an FIVB World Tour single season record in season earnings with $435,000. Larissa has earned $1,669,735 in her illustrious FIVB career, more than any other female player in the history of the FIVB. As a team, Brazil’s Larissa/Talita tandem has won 11 gold medals in the 16 FIVB tournaments they have played as a team over parts of two seasons. For her FIVB career, Larissa has played in 131 events over 13 seasons. Larissa took the 2013 FIVB season off after winning the bronze medal at the London 2012 Olympic Games with Juliana Felisberta.
Brazil’s Talita, 33, who with Taiana Lima won the 2013 FIVB World Tour point title, was voted the 2015 FIVB Best Hitter, the third straight year she has won this award. Additionally, she teamed with Larissa to be crowned the 2015 FIVB World Tour Champions after winning the Swatch FIVB World Tour Finals in Fort Lauderdale, Florida, USA.
Brazil’s Agatha/Barbara tandem, who won three gold medals in 2015 including the FIVB World Championships in the Netherlands, are being honored as the 2015 FIVB Team of the Year for winning the 2015 FIVB World Tour point’ crown.
USA’s April Ross, who won the silver medal at the London 2012 Olympic Games with Jennifer Kessy, was voted the 2015 FIVB Best Server. For A. Ross, who played with several partners in 2015 while her regular teammate, three-time Olympic gold medalist Kerri Walsh Jennings, was sidelined twice with a shoulder injury.
Two teams have both members voted to special honors. Canada’s Sarah Pavan was voted the 2015 FIVB Best Blocker and her teammate Heather Bansley was voted the 2015 FIVB Best Defensive Player. Vanuatu’s surprising duo of Linline Matauatu (FIVB Most Improved Player) and Pata Miller (FIVB Most Inspirational Player) each received an award as well.
Germany’s Ludwig, who won one gold medal this season playing with Kira Walkenhorst, was voted the 2015 FIVB Sportswoman of the Year.
Two additional first-time winners of women’s season awards were Netherlands’ Van Iersel (2015 FIVB Best Setter) and Finland’s Lahti (2015 FIVB Top Rookie).
“These awards are so special to me because the FIVB World Tour is the best of the best playing against each other each week,” said Larissa. “Beach Volleyball is a team sport and I share these awards with Talita who is such an amazing teammate for me. Together we have won these awards. The competition is fierce but when we are on the court, we are truly a force. Our goal is for this to continue through the 2016 FIVB World Tour and into Brazil for the Rio 2016 London Olympic Games.”
2015 FIVB Beach Volleyball World Tour Player Awards - Women
Most Outstanding – Larissa (Brazil)
Best Spiker – Talita (Brazil)
Best Blocker – Sarah Pavan (Canada)
Best Defensive – Heather Bansley (Canada)
Best Offensive – Larissa (Brazil)
Best Setter – Marleen Van Iersel (the Netherlands)
Best Server – April Ross (USA)
Rookie of the Year – Taru Lahti (Finland)
Most Inspirational – Pata Miller (Vanuatu)
Most Improved – Linline Matauatu (Vanuatu)
Sportsman of the Year – Laura Ludwig (Germany)
Team of the Year- Agatha and Barbara (Brazil)
Voting made by players, coaches, referees and officials