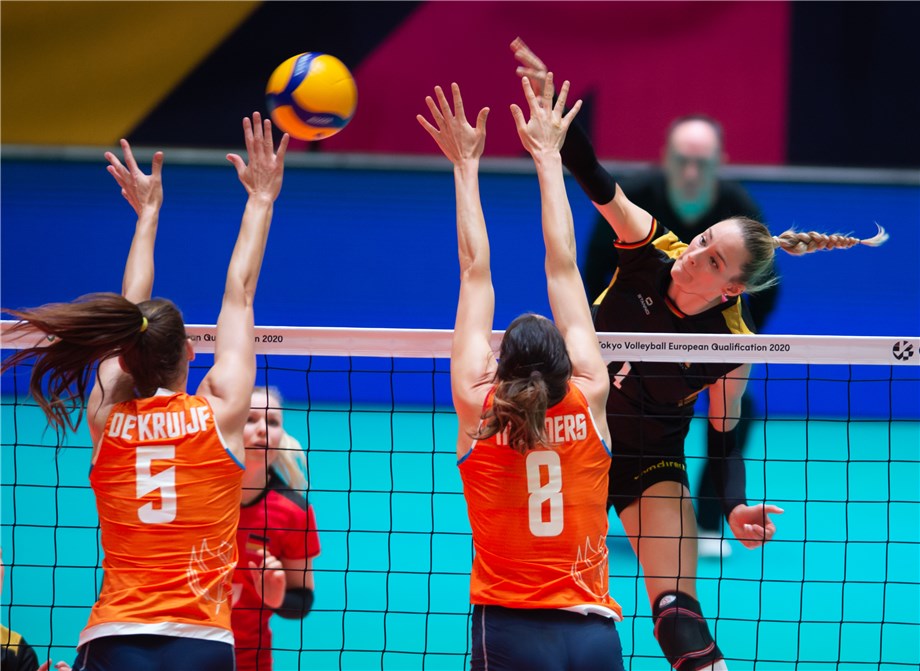 Louisa Lippmann tries to beat the Dutch block of Robin De Kruijf and Floortje Meijners as she leads Germany to a sweep of their rivals and a place in the final of the European qualifiers for the Tokyo 2020 Olympic Games.

Lausanne, Switzerland, January 11, 2020 - Germany and Turkey in Europe, Thailand and Korea in Asia, battle it out for two more tickets to the women's volleyball tournament of the Tokyo 2020 Olympic Games, after all won their semifinals at the qualifiers Saturday evening, while the Dominican Republic and Puerto Rico play the decider for North & Central America and the Caribbean.

The Dominican Republic and Puerto Rico both scored their second wins in the single round-robin pool in Santo Dominingo, remained undefeated and go head-to-head Sunday to decide the continental ticket to Tokyo 2020.

Brayelin Martinez with 26 points and Bethania de la Cruz with 24 powered the 'Queens of the Caribbean' - everyone else scoring in dsingle digits. 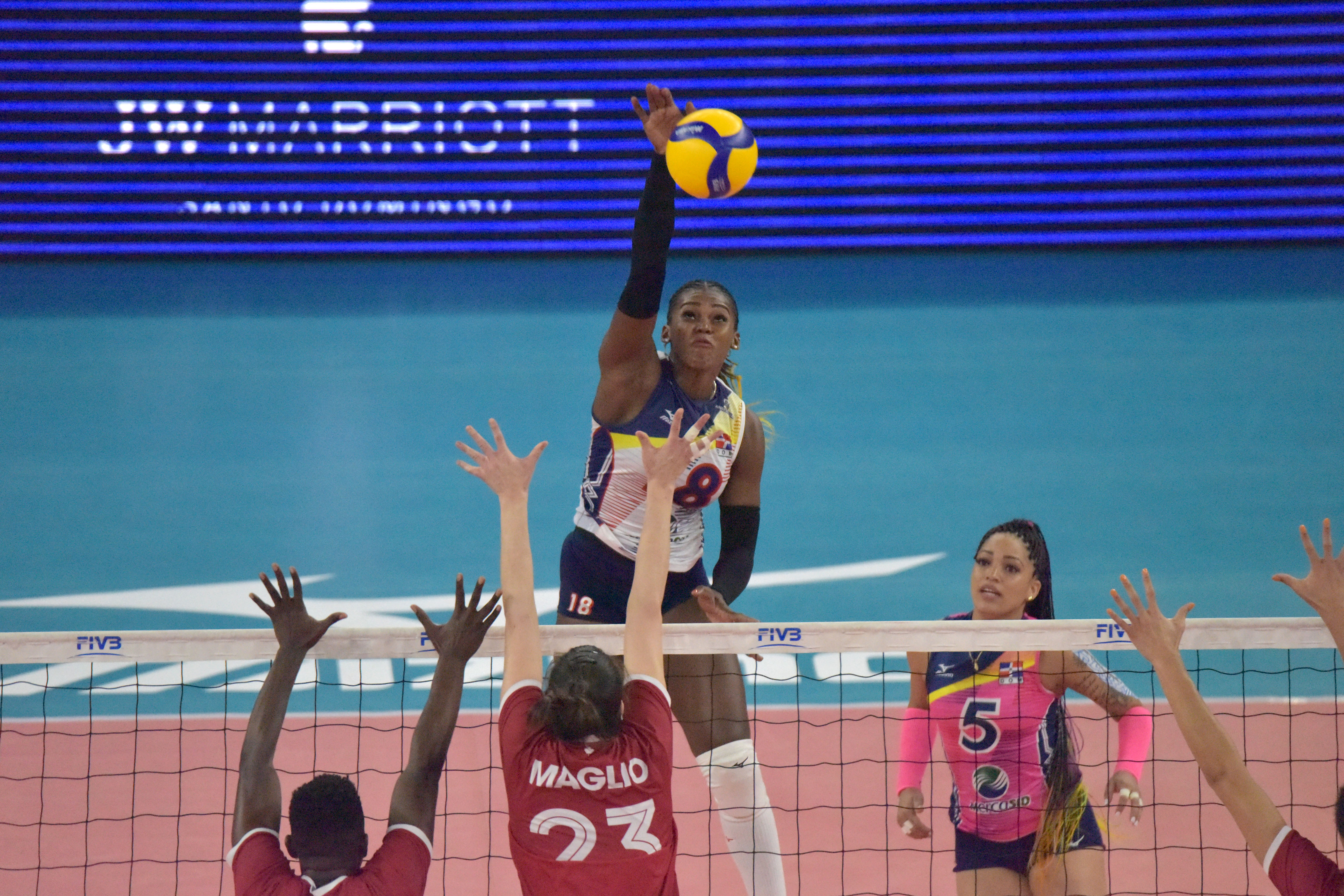 Bethania de la Cruz jumps high for the attack against Canada as she helps the Dominican Republic stay undefeated in the race for a ticket to the Tokyo 2020 Olympics.

Puerto Rico completed Saturday's play at Santo Domingo with a 3-0 (25-20, 25-22, 25-23) of Mexico with Puerto Rico's Daly Santana and Mexico's Andrea Rangel each scoring 19 points. Stephanie Enright with 15 for Puerto Rico was the only other player to go into double digits. 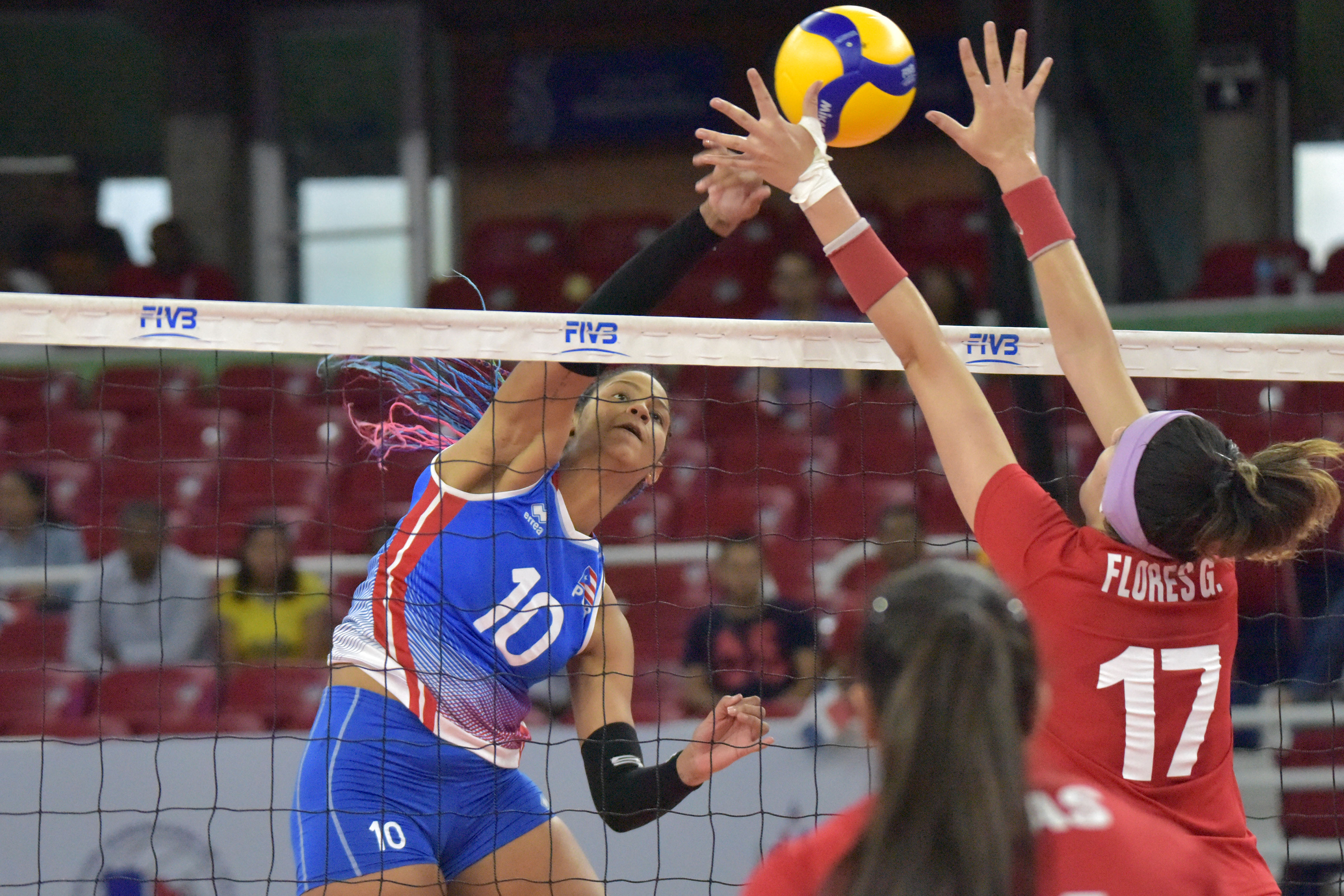 Diana Reyes tries to punch through theblock of Mexico's Karina Flores as Puerto Rico stay on track for a ticket to the Tokyo 2020 Olympics.

Europe
Germany silenced the Dutch crowd in Apeldoorn with a stunning and spectacular 3-0 (27-25, 25-23, 25-22) on the back of some amazing defending and solid receiving.

The hosts were close enough in the first set, but never managed to reach set point, as Germany finished it on the third of their own. And a Dutch lead by as many as six points in the first half of the second came to nothing, as Germany turned it around and reached set point with two to spare - then converted their first sideout.

Louisa Lippmann brough in the bulk of Germany's at a match high of 21, including three aces, as Hanna Orthmann added another 14. Fifteen was the best Nika Daalderop could do for the Netherlands.

Even Lonneke Sloetjes coming on off the bench to start in the second and the Netherlands' Italian coach making internal changes couldn't help the home side overcome the brilliance of Germany.

Poland blew five match points to finish the match in four, including more than a few counter-attack opportunites, as Turkey clambered back to save the set and go on to win the match - not least due to the efforts of Meryem Boz who scored an incredible match high of 36 points.

Kim Heejin scored 18 points for Korea, who played throughout without their start player and captain Kim Yeon Koung, but overall in the match totally outserved (12 aces to 4) and outblocked (16 stuffs to 3). Chang Li-Wen was Chinese Taipei's best scorer on 14.

The hosts just managed to cancel two set points in the third, before Kazakhstan got it right in their third try to extend the match.

Pimpichaya Kokram with a match high of 29 points led Thailand. Sana Anarkulova and Alessya Safronova were jointly Kazakhstan's best scorers on 16 each. 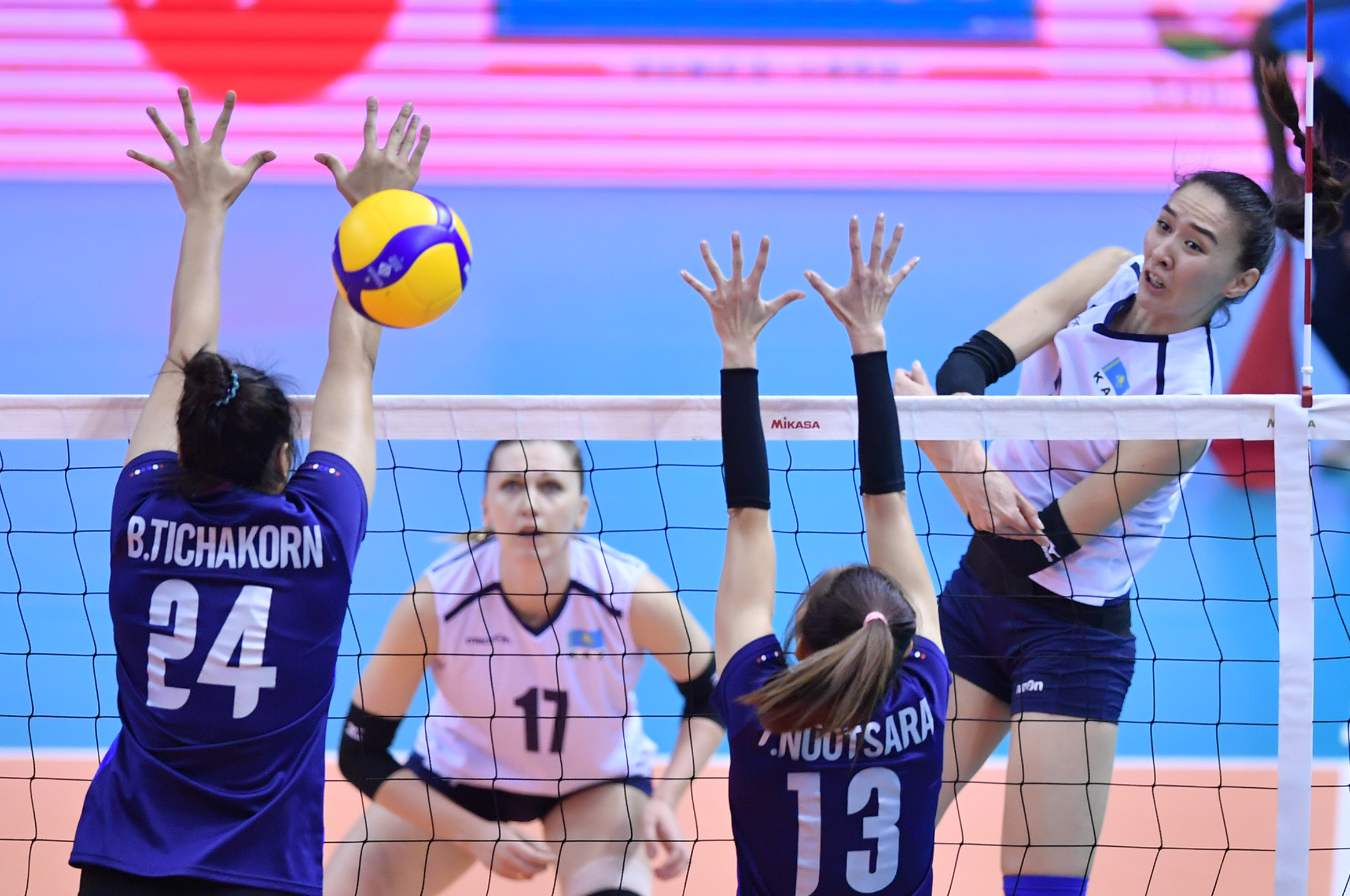 Kazakhstan's Sana Anarkulova breaks through the Thailand block of Tichakorn Boonlert and Nootsara Tomkom in the semifinals of the Asia qualifiers for the Tokyo 2020 Olympics.

Argentina from South America and Kenya from Africa have already punched their tickets to Tokyo 2020 since Thursday.

They join Serbia, China, USA, Brazil, Russia and Italy who had already qualified since last August through an intercontinental process, plus Japan who had secured their spot by default as hosts of the Tokyo 2020 Olympics.

The remaining three tickets to complete the 12-team Olympic lineup will be handed out on Sunday in Asia, Europe and North & Central America and the Caribbean.