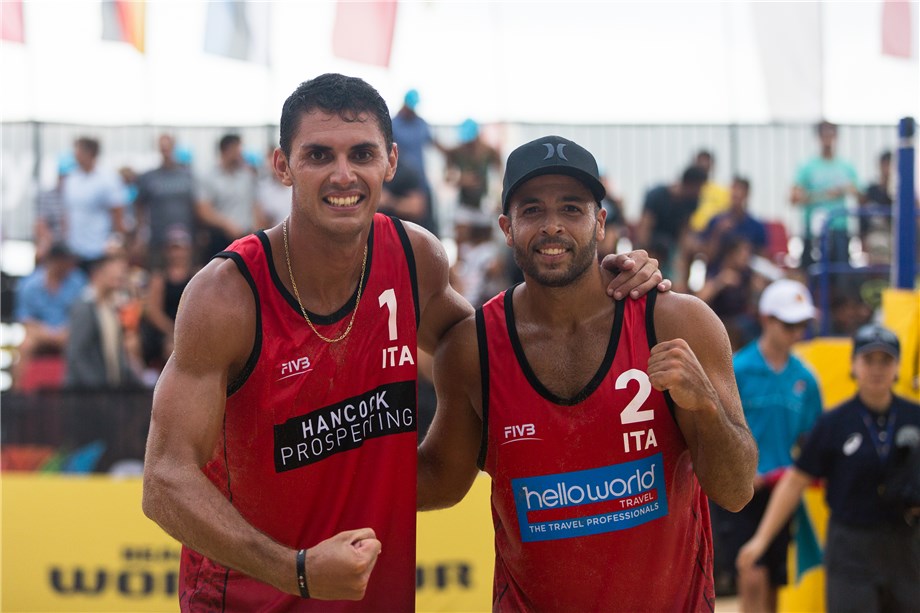 Italy's Enrico Rossi (left), who celebrated his 26th birthday Thursday, and Adrian Carambula are a late addition to the men's field at the 2019 FIVB World Championships in Hamburg, Germany.

Hamburg, Germany, June 27, 2019 - Due to a toe injury and a  force majeure, teams from the Czech Republic and Sierra Leone withdrew from the 2019 FIVB World Championships presented by comdirect & ALDI Nord here Thursday afternoon with pairs from Austria and Italy being named as the replacement duos for the competition.
Quick links - Beach volleyball:
FIVB Beach Volleyball World Championships Hamburg 2019
FIVB.com - Beach volleyball
Facebook
Twitter
Instagram
The US$1-million FIVB World Championships begin here Friday at Rothenbaum Stadium with pool play competition for both men and women.  The 12th annual World Championships conclude July 6 for women and July 7 for men as the winning teams will share the $60,000 first-place prize while earning their countries a berth in the Tokyo 2020 Olympic Games.
In the 48-team women's tournament, a right toe injury to Marketa Slukova forced her withdrawal with Barbora Hermannova as the second-seeded Czech Republic pair is now replaced in Pool B by Lena Plesiutschnig/Katharina Schutzenhofer of Austria.
“I am extremely sad and heartbroken," said the Slukova, who will celebrate her 31st birthday Friday.  "I can’t even describe the disappointment right now. For 10 years, I have done everything to travel to a World Championships as a No. 1 and having a shot to win a medal - this year it looked like that but then this happened - my coach is right, there is too much at stake.”
The Austrians, who captured a gold medal in their last FIVB World Tour appearance June 9 in Baden, Austria, will play their first match Friday against 47th-seeded Leonie Kortzinger/Sarah Schneider of Germany.  Plesiutschnig and Schutzenhofer conclude pool play against 23rd-seeded Katarzyna Kociolek/Kinga Wojtasik of Poland and 26th-seeded Tina Graudina/Anastasija Kravcenoka of Latvia. 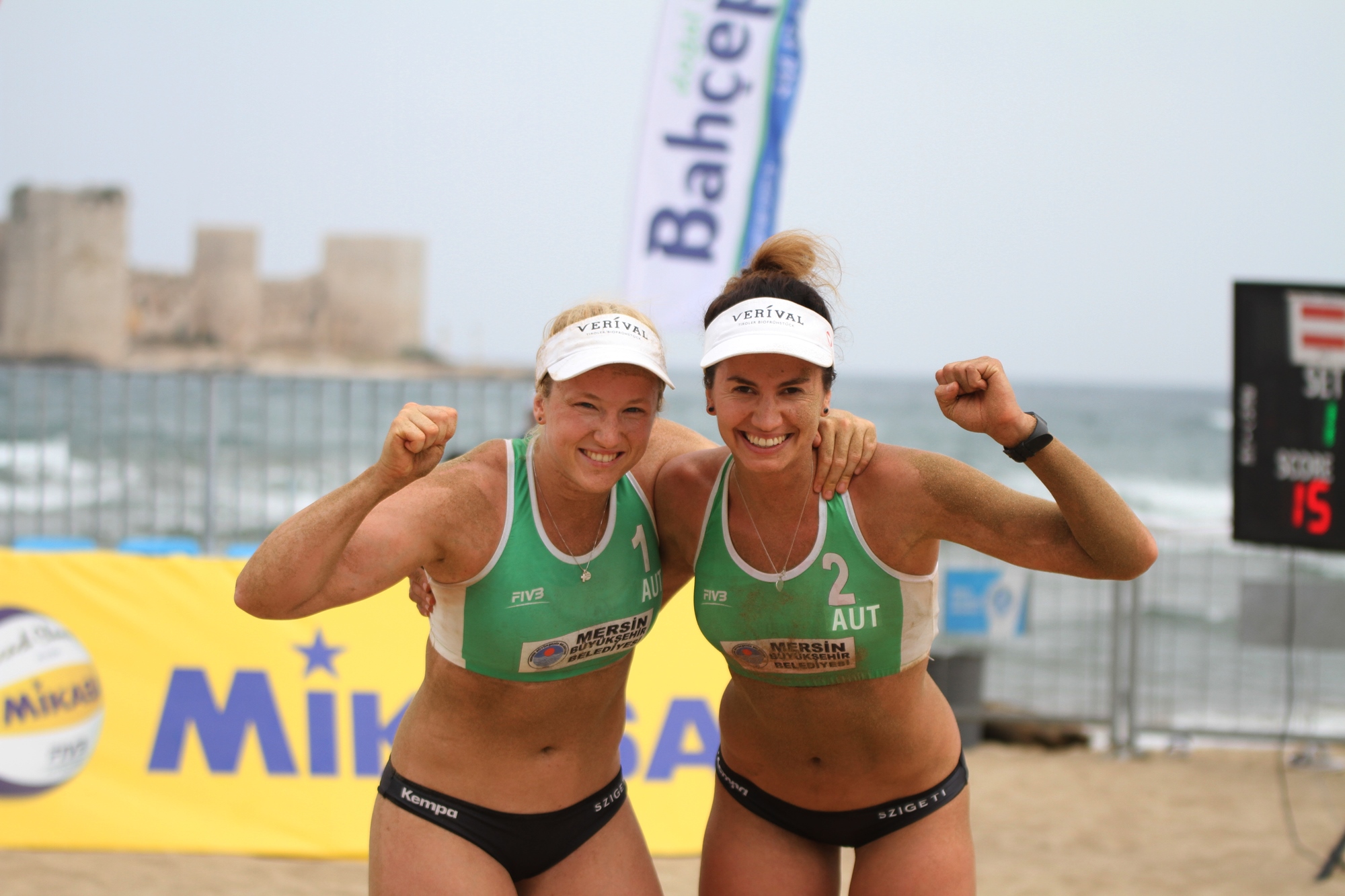 Katharina Schutzenhofer (left) and Lena Plesiutschnig of Austria
Plesiutschnig and Schutzenhofer, who competed with different partners at the 2017 World Championships in Vienna, will be playing Kortzinger and Schneider for the second time on the World Tour after the Austrians posted a 2-0 (23-21, 21-14) pool play win March 8 over the Germans in Sydney, Australia.
In the 48-team men's tournament, Adrian Carambula and Enrico Rossi of Italy replaced Ishmail Bangura/John S. Kamara in Pool D as the 45th-seeded team in the competition as the of Sierra Leone pair were a late withdrawal due to travel issues.  For Rossi, the addition to world championship lineup was on the same day as he celebrated his 26th birthday.
The Italians, who have reached World Tour final fours in two of their five FIVB appearances this season at events in Australia (Sydney silver) and China (Xiamen fourth), will challenge fourth-seeded Cherif Samba/Ahmed Tijan of Qatar in their first match Friday.
In the Xiamen medal round April 28, Samba and Tijan posted a 2-1 (13-21, 21-15, 15-10) bronze medal win over Carambula and Rossi, who is playing in his first World Championships. A Rio 2016 Olympian for Italy, Carambula placed 17th at the 2017 World Championships in Vienna with Alex Ranghieri. 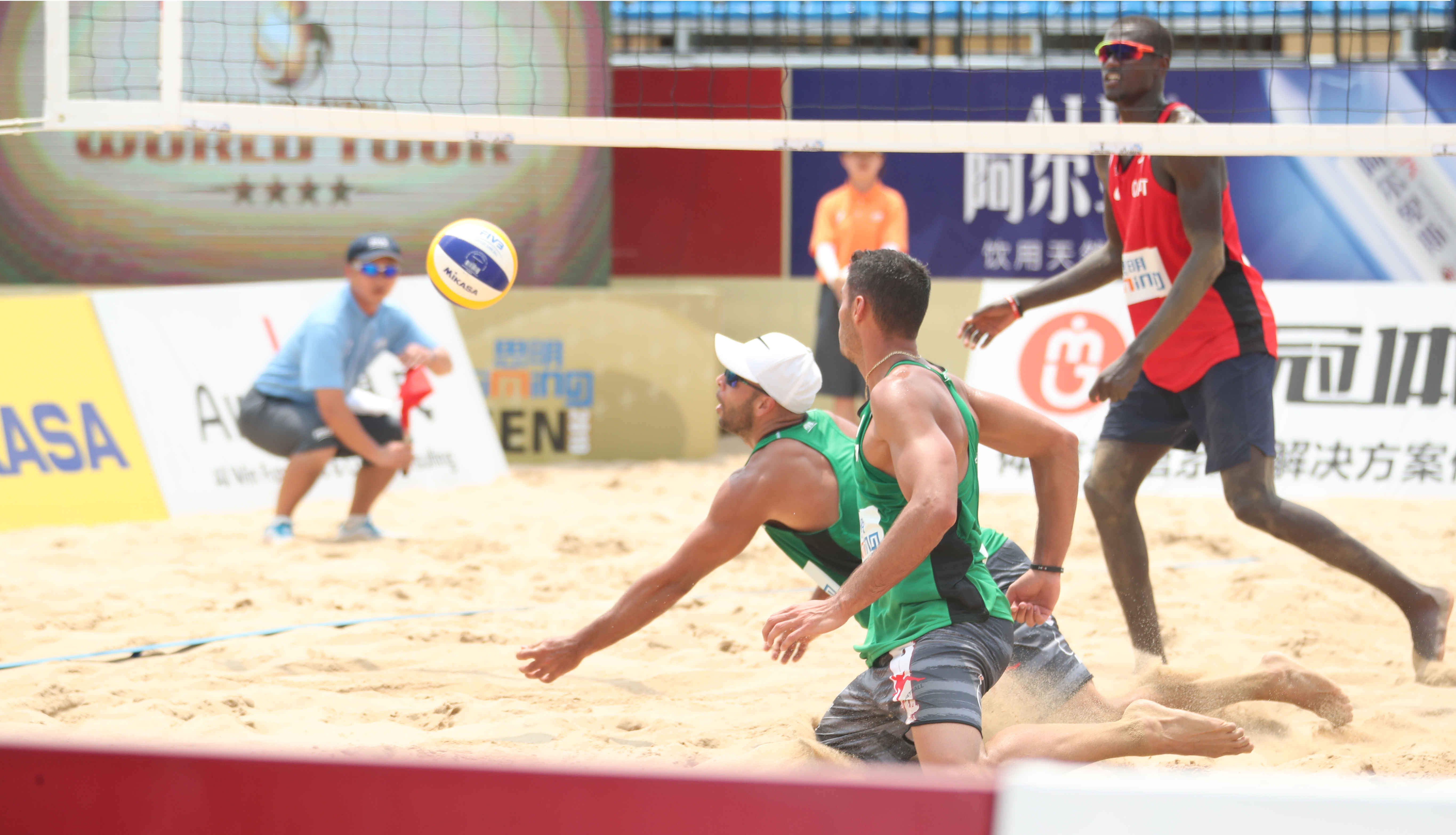 Eyeing Mikasa is Italian Adrian Carambula as partner Enrico Rossi follows the action with Qatar's Cherif Samba during a match in Xiamen, China.
Also competing in Pool D with the Qatar and Italy pairs will be 21st-seeded Dries Koekelkoren/Tom van Walle of Belgium and 28th-seeded Ondrej Perusic/David Schweiner of the Czech Republic.
"Although we are disappointed for the Czech team, we are excited about having an opportunity to compete in another World Championship," said the 25-year old Schützenhöfer, who also participated in the 2013 World Championships in Poland with Barbara Hansel as the Austrian pair finished ninth.
For the Italians, it is a "dream come true," for the 26-year old Rossi.  "Adrian and I have posted some good results this season and look forward to continuing our season in Hamburg. This will be the biggest beach volleyball event for me, and I look forward to playing the teams from Qatar, Belgium and the Czech Republic."