Before the regular season’s last match on Sunday evening, Lokomotiv had already secured the top of the final standings, but in the spirit of fair play battled out a five-set victory at Ural Ufa, thus denying the opponent the opportunity to make the playoffs. The team from Novosibirsk finished on a 16-3 win-loss record after displaying cohesiveness, selection depth and great teamwork around some national team players in the core, such as Polish setter Fabian Drzyzga, Serbian outside Marko Ivovic and Russian middle Ilyas Kurkaev, throughout the regular season. A couple of players also managed to finish as individual ranking leaders. One of them, 2.05m-tall Russian international Dmitry Shcherbinin, piled up a season-high of 56 kill blocks, while 2016 Olympian, libero Artem Ermakov, achieved the highest percentage of good receptions (67%) among all players with at least 50 processed opponent serves.
Until their last match, Zenit Kazan kept their chances of finishing in pole position alive, but surprisingly lost at Gazprom-Ugra Surgut in straight sets on Saturday to leave Lokomotiv pulling the Superliga composition. With a glamorous line-up of top international stars on the squad, such as France’s Earvin Ngapeth, Bulgaria’s Tsvetan Sokolov and Russia’s Maxim Mikhaylov, to name a few, the Tatari powerhouse finished runner-up on a record of 15 wins, 4 defeats and 44 points. One of their younger players, however, 22-year-old middle blocker Alexei Kononov, silver medalist at the 2017 FIVB U23 World Championship, topped the individual chart for success rate (69%) in attack among all players who attempted at least 50 spikes.
With the likes of Victor Poletaev, Yaroslav Podlesnykh, national team captain Igor Kobzar and experienced former international Evgeny Sivozhelez on the squad, defending champions Kuzbass Kemerovo finished third, also on a 15-4 win-loss record, but with 42 points. Their middle Mikhail Shcherbakov scored a season high average of 0.87 stuff blocks per set played.
With up-and-coming international star Pavel Pankov in the playmaker role and Belgian national team captain Sam Deroo delivering in attack, Dinamo Moscow came out fourth on 14-5.
Zenit Saint Petersburg, steered by Russia’s national team coach Tuomas Sammelvuo, took the fifth place on 13-6, with German star Gyorgy Grozer delivering 33 aces to become the best server of the regular season, towards an individual total of 340 points, which made him second best in the scorers’ chart.
Twi-time VNL Dream Teamer Dmitry Volkov and American libero Eric Shoji, also on the 2019 VNL Dream Team, powered Champions League rookies Fakel Novy Urengoy to the sixth position in the Superliga table on a 12-7 win-loss record.
Yenisei Krasnoyarsk (8-11, 26 points), Belogorie Belgorod (8-11, 23), Gazprom-Ugra Surgut (7-12) with Polish international Maciej Muzaj hammering out an incredible 436 points (including 398 spikes) or an average of 5.59 per set to become the best scorer and the best attacker of the regular season, and Dinamo-LO Leningrad Oblast (6-13), who made the playoffs for the first time in the club history, lined up in positions 7 through 10 for another shot at reaching the Final Six. 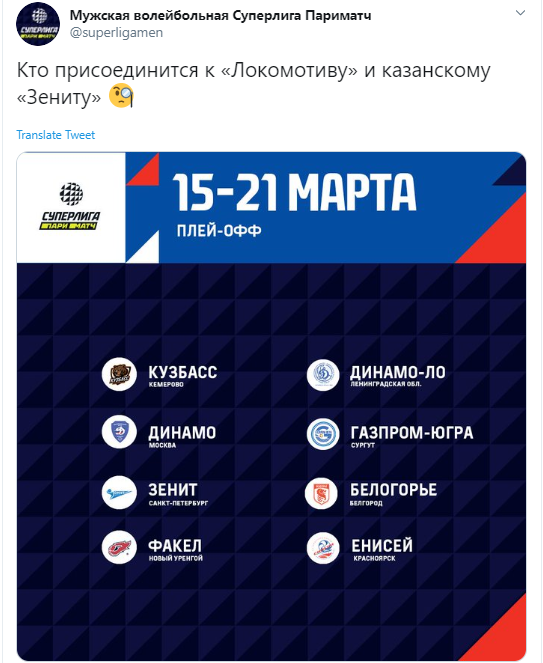 These four teams will host the first-leg matches of the playoffs on March 15 and will visit their higher-ranked opponents for the second leg on March 21. The playoffs will be played in a two-game home-and-away format with golden set as the tie-breaker. The Final Six in Novosibirsk will take place from March 30 through April 5, when the 2020 national champions should emerge.
Additional tournaments will be played for the distribution of the places from 11th through 14th, with the participation of ASK Nizhny Novgorod, Ugra-Samotlor Nizhnevartovsk, Ural Ufa and Nova Novokuybyshevsk, who did not make the playoffs. The bottom-ranked team will be relegated to the second division and the next-to-last finisher will play a relegation playout against the second division runners-up.
More volleyball from Russia:
Parubets shines in Russian quarterfinals
Maciej Muzaj’s top five scoring performances in Russia
Dinamo Kazan top regular season in Russia, all set for playoffs
End of an era? Zenit’s earliest ever Champions League exit
Kseniia Parubets shines as Champions League top scorer
Olympic champ returns to Russian Superliga
Russian national team opposites engage in scoring race
Poletaev back in action after injury
Goncharova proves priceless for Dinamo
Quick links:
FIVB Volleyball Nations League
Olympic Games Tokyo 2020
Facebook
Twitter
Instagram
Youtube