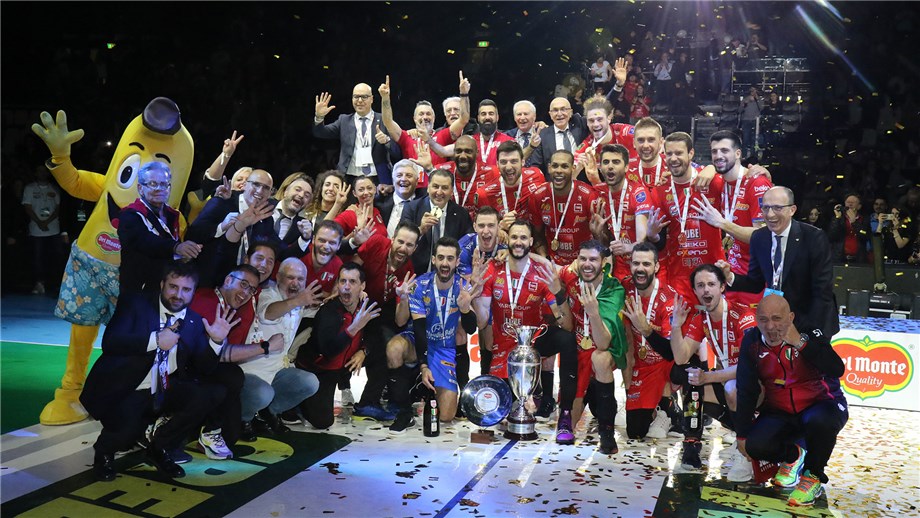 Bologna, Italy, February 24, 2020 – Lube Civitanova’s Bruno Rezende led the plaudits after Lube Civitanova added the Coppa Italia to their 2019 FIVB Volleyball Men’s World Club Championship title with victory over Sir Safety Perugia on Sunday.
The teams faced off in front of 8,900 fans at the Unipol Arena in Bologna and Civitanova triumphed with a 3-2 (21-25, 25-23, 25-23, 34-36, 15-10) victory.
“Winning a match at this level is amazing,” Bruno said. “Perugia played really well, but we were excellent and didn’t lose our heads after wasting chances to win in the fourth set.
“We reached the final full of confidence and showed maturity and calmness. We were able to understand the game plan and that meant we won another title.”
Perugia’s Wilfredo Leon scored 31 points to lead scoring, while Civitanova’s Osmany Juantorena finished with 28.
Yoandy Leal also passed the 20-point mark and finished with 23.
“We have won a lot of titles, but we were missing the Cup,” Leal said. “I’m happy with our level of play. I don’t want to brag but we showed today that we deserved to win the final.”


More volleyball from Italy:
Colaci has new deal, but no new trophy
Leal and Simon celebrate new deals in style
Giani hails perfect 10 as Modena keep up the chase
Menegatti not taking Tokyo 2020 qualification for granted
Mazzanti ready for fight in Tokyo 2020 pool
Christenson keeps Modena in the hunt for Italian title
Blengini taking nothing for granted after Olympic pool draw
Carambula in World Tour form on Copacabana
Atanasijevic celebrates new contract in style
Egonu in top form as Conegliano add another trophy to their collection
Does Hancock hold the aces for USA at Tokyo 2020?
Piccinini is back!