Lucarelli: Brazil are on the up 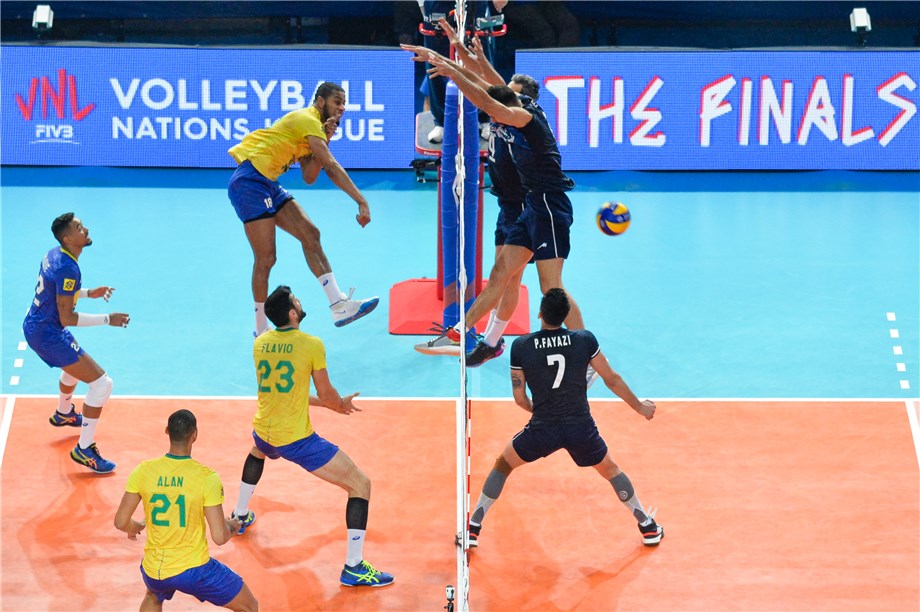 Chicago, USA, July 13, 2019 – Brazil reached the FIVB Volleyball Nations League Finals with the best record in the preliminary phase, but they were the last team to secure a berth into the semifinals starting on Saturday.
The Brazilians were extended to five sets in both of their VNL Finals pool play matches. They lost a heart-breaking five-set match to Poland 25-23, 23-25, 25-21, 21-25, 15-9 to start Pool B leading to a must-win match versus Iran on Friday. Brazil looked primed to earn their semifinal berth quickly, jumping out to a 2-0 lead and nearly won the match in the third set. However, Iran charged back to win the next two sets 26-24 and 25-20 and held an early three-point cushion early in the tiebreaker. With their backs against the wall, Brazil rallied to defeat Iran 15-10 in the deciding set to claim the final semifinal spot right at the wire.
Brazil now faces yet another challenge in host USA, 2-0 in VNL Finals Pool A, in the second semifinal at 8 p.m. local time (Central Time) on Saturday. Having played two consecutive five-set matches in the more competitive Pool B, Brazil’s Ricardo Lucarelli Souza says the two five-set battles can be helpful if they can overcome the fatigue.
“We have two sides – the tired side and the improving side,” Lucarelli said. “I think in this moment we feel a little tired. But we are really thinking and playing the game. Playing tired may be good. We can find some things to fix and keep doing the good things.”
Brazil is no stranger to playing five-set matches in this year’s VNL. While nearly perfect in the win column 14-1 in the Preliminary Round, Brazil was forced to a fifth set five times, showing it can bend but not break under pressure more times than not. Through the VNL Finals, they have played five sets in seven of their 17 matches with a 6-1 record in those contests.
As for what Brazil needs to improve on in the VNL semifinals, Lucarelli feels it comes down to the service game and specifically on reception.
“I think we can improve on the reception line,” Lucarelli said. “We have to do that a little better.”
In tonight’s first semifinal, a surprising young Poland will take on Pool A’s second-place team Russia at 5 p.m. local time (Central Time). In addition to shocking Brazil in five sets in the Finals Round opener on Wednesday, Poland defeated Iran in four sets on Thursday to earn their spot into the semifinals.
Russia, 1-1 in the VNL Finals Pool A, swept France on Thursday before losing to USA in three sets on Friday as both teams already had secured their semifinal berths.