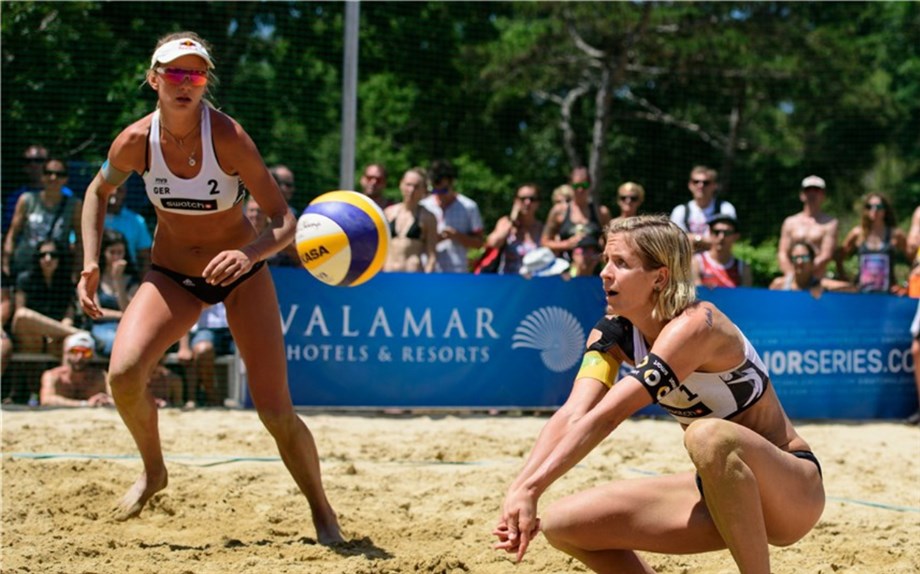 Lausanne, Switzerland, January 7, 2019 – Laura Ludwig is set to defend her Olympic and world titles alongside new partner Margareta Kozuch, after they announced on Monday that they would be playing together for the coming season.
Ludwig won gold with Kira Walkenhorst at the Rio de Janeiro 2016 Olympic Games and the Austria 2017 FIVB Beach Volleyball World Championships, but on Monday Walkenhorst announced her retirement after failing to recover sufficiently from injury.
The pair have played together on the FIVB Beach Volleyball World Tour once before when they finished ninth at the 2017 Porec 5-Star tournament. The Hamburg 2019 FIVB Beach Volleyball World Championships will run from June 28-July 7.
“Maggie has everything you need,” Ludwig said. “She's incredibly athletic, she has insane ball control, she's a real fighter, she's ready to invest a lot and she wants to go full throttle with our team, and we're all looking forward to our project.”
Margareta ‘Maggie’ Kozuch is Germany's most successful indoor volleyball player. She has won 336 caps and led Germany to two European silver medals and the Euroleague title, and won the Champions League with Pomi Casalmaggiore. She was also named Germany's best volleyball player from 2010 to 2014.
After playing 15 World Tour events with Karla Borger in 2017 and 2018,  Kozuch will now go fulltime alongside Ludwig at the Olympic Training Centre in Hamburg under the coaching of Jurgen Wagner who coached Ludwig and Walkenhorst to gold at Rio 2016.
“I think working with this experienced team is a great option for me,” Kozuch said. “In our first joint training session it all clicked and I have a very good feeling.
“I have the impression that something great can arise here.”
Ludwig made her World Tour debut in 2005 and she then played for eight years and the Beijing 2008 and London 2012 Olympic Games with Sara Goller.
Goller retired in 2012 and Ludwig teamed up with Walkenhorst. Aside from Olympic and world gold, they won two FIVB World Tour Final golds, seven World Tour golds and two European Championships.
Quick links - Beach volleyball:
FIVB Beach Volleyball World Tour
FIVB.com - Beach volleyball
Latest Videos
Facebook
Twitter
Instagram
In 2018 neither player competed on the World Tour, Walkenhorst through injury and Ludwig because she was away having given birth to her first child.
“In January, February and March, we will travel for two to three weeks for warm weather training,” Ludwig said. “In April we will be together on the court for the World Tour event in China (Xiamen 4-Star).
“We want to be in top shape for the World Championships and I am excited by what might happen over the next six months.”