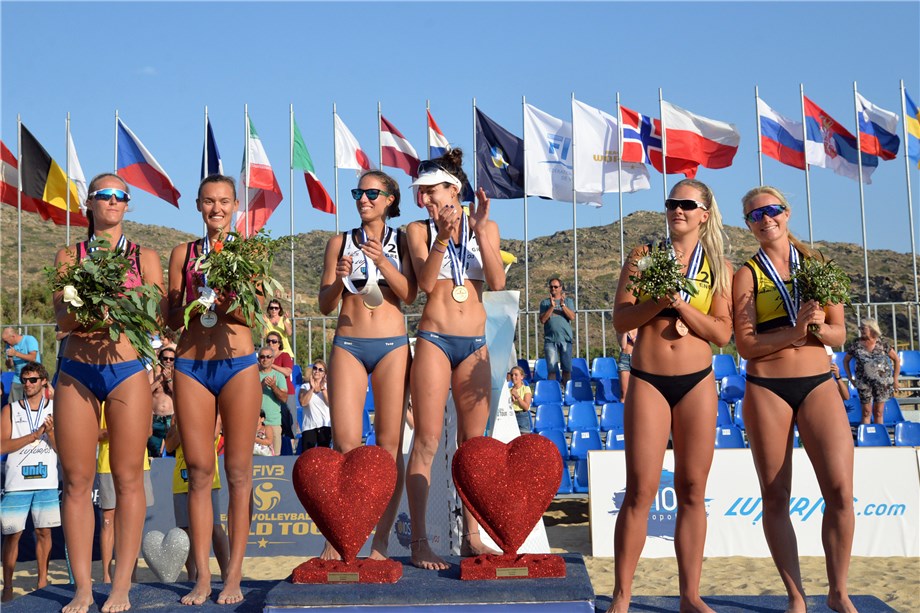 Ios, Greece, June 16, 2019 - Greece's Dimitra Manavi and Konstantina Tsopoulou defended their top seed entry of the tournament to claim gold in the 2019 FIVB Beach Volleyball World Tour tournament on the Cycladic island of Ios following a 2-0 (21-18, 21-16) sweep of Romania's Beata Vaida / Ioana-Alexandra Ordean who had come into the Main Draw from the qualifiers.

It is the first gold medal for the Greek pair, who had previously bagged two bronze and silver in World Tour 1-star tournaments.

"We have heard our National Anthem before in lesser competitions, but this time it was especially emotional," said Manavi after the Awards Ceremony on breathtaking Mylopotas Beach.

"The gold medal could not have come at a better moment, as it's just a week ahead of the Continental Cup, which gives us a huge psychological boost for that competition," added her team mate Tsopoulou.

The Greek's finished the Ios tournament undefeated and only dropped a single set in their opening game.

For the Romanians it was their best performance as a pair, after a fourth-place finish at the Tuan Chau Island One Star earlier this year in Vietnam.

Earlier on Sunday afternoon England's Anaya Evans / Ellie Austin, also in through the Qualifying Tournament, had shut out Sofia Ogren / Camilla Nilsson of Sweded 2-0 (21-17, 22-20) for the bronze medal.