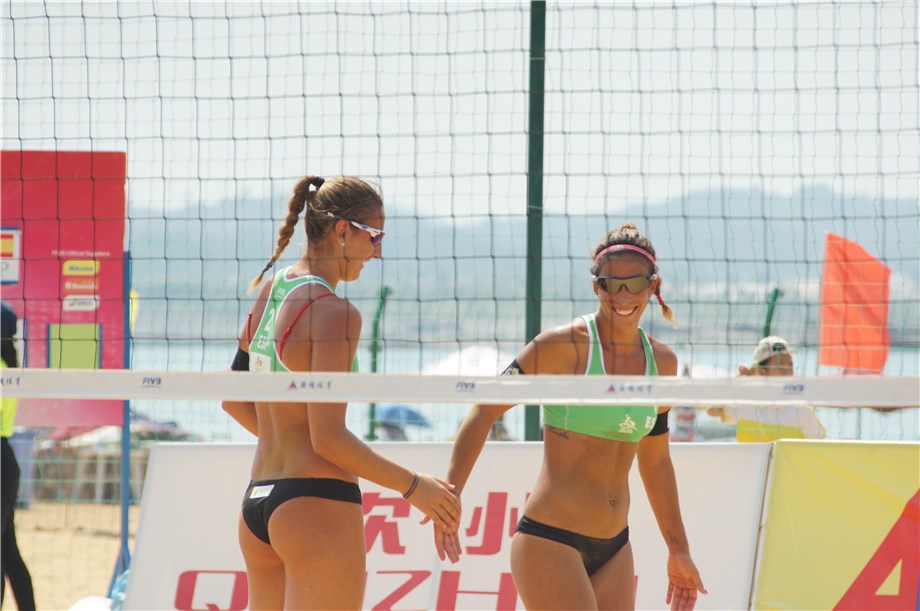 Sydney, Australia, March 4, 2019 - When qualifying play starts here Wednesday at the Sydney Open on Manly Beach, the women's field will include 2018 Mediterranean Games gold medal winners Maria Belén and Paula Soria of Spain.
Quick links - Beach volleyball:
FIVB Beach Volleyball World Tour - SydneyFIVB.com - Beach volleyballFacebookTwitterInstagram
The $150,000 Sydney Open will be the sixth FIVB Beach Volleyball World Tour event for the Spanish pair as Belén and Soria posted a ninth in their last appearance on the international circuit five months ago in Qinzhou, China.
Prior to their Chinese appearance where Belén and Soria upset two-time FIVB World Tour winners Josemari Alves/Liliane Maestrini of Brazil in pool play, the Spaniards won the Mediterranean Games on June 30 in Tarragona, Spain.
After defeating compatriots Amaranta Fernandez and Angela Lobato in the semifinals, Belén and Soria secured a 2-1 (21-16, 18-21, 15-11) win over Aline Chamereau and Alexandra Jupiter of France to secure the title.
With six-straight Mediterranean Games wins, Belén and Soria won six of seven matches at the 2018 World University Games two weeks later in Munich where their only setback was in the gold medal match on July 13 to the McNamara twins (Megan and Nicole) of Canada.
Belén and Soria upset American collegiate standouts Emily Sonny and Torrey Van Winden of Cal Poly in the semifinals before losing the WUG gold medal match to the McNamaras in three sets. The McNamaras led UCLA to the American collegiate title three months earlier.
While 26-year old Soria has been participating in FIVB events since 2010, the 19-year old Belén's World Tour experience started last season after playing 2016 and 2017 in FIVB youth and junior world championship events.
For their five FIVB World Tour events together, Belén and Soria have posted a 15-8 match mark with two silver medal finishes last May at events in the Philippines (Manila) and Thailand (Bangkok). The Spaniards started their partnership a month earlier with a fifth-place at Satun, Thailand. 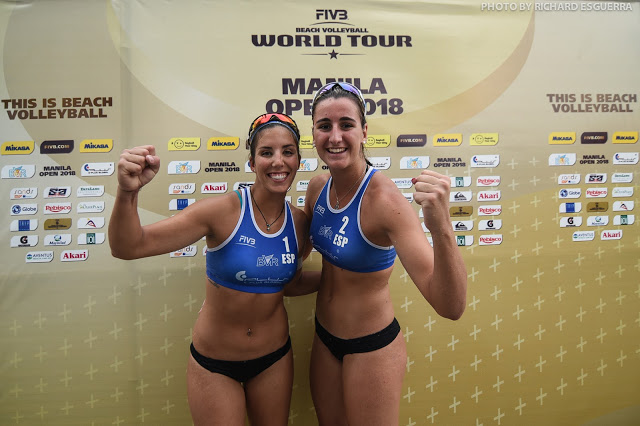 Celebrating in Manila are Paula Soria (let) and Maria Belén of Spain
"I was looking for someone to play with after splitting up with my then partner (Angela Lobato)," said Soria, "and I saw Belén competing in a national tournament. As she has good conditions to play this sport, I decided to talk with her coach and see if I could play with her."
When asked if she is the team's coach due to her FIVB experiences, Soria said "no, but I try to convey my experience during the game and at our training sessions at the CIVP in Lorca, Murcia. It’s the International Centre of Beach Volley here in Spain."
As for a memorable FIVB moment, Soria mentions her fourth-place finish with Lobato at the 2014 Anapa Open in Russia in her second World Tour start. "Reaching the Anapa semis and losing a close match to the Germans (Victoria Bieneck and Julia Grossner) was memorable," said Soria, who has played in 31 FIVB-sanctioned events since 2010.
"I started playing beach volleyball when I was 14 with my indoor club, in Madrid, but only in summer," said Belén. "When I was 17 the Spanish federation opened the CIVP in Lorca, Murcia, for young players, and they called me for the national team, so I moved there. Since then, I´ve been training there all year." 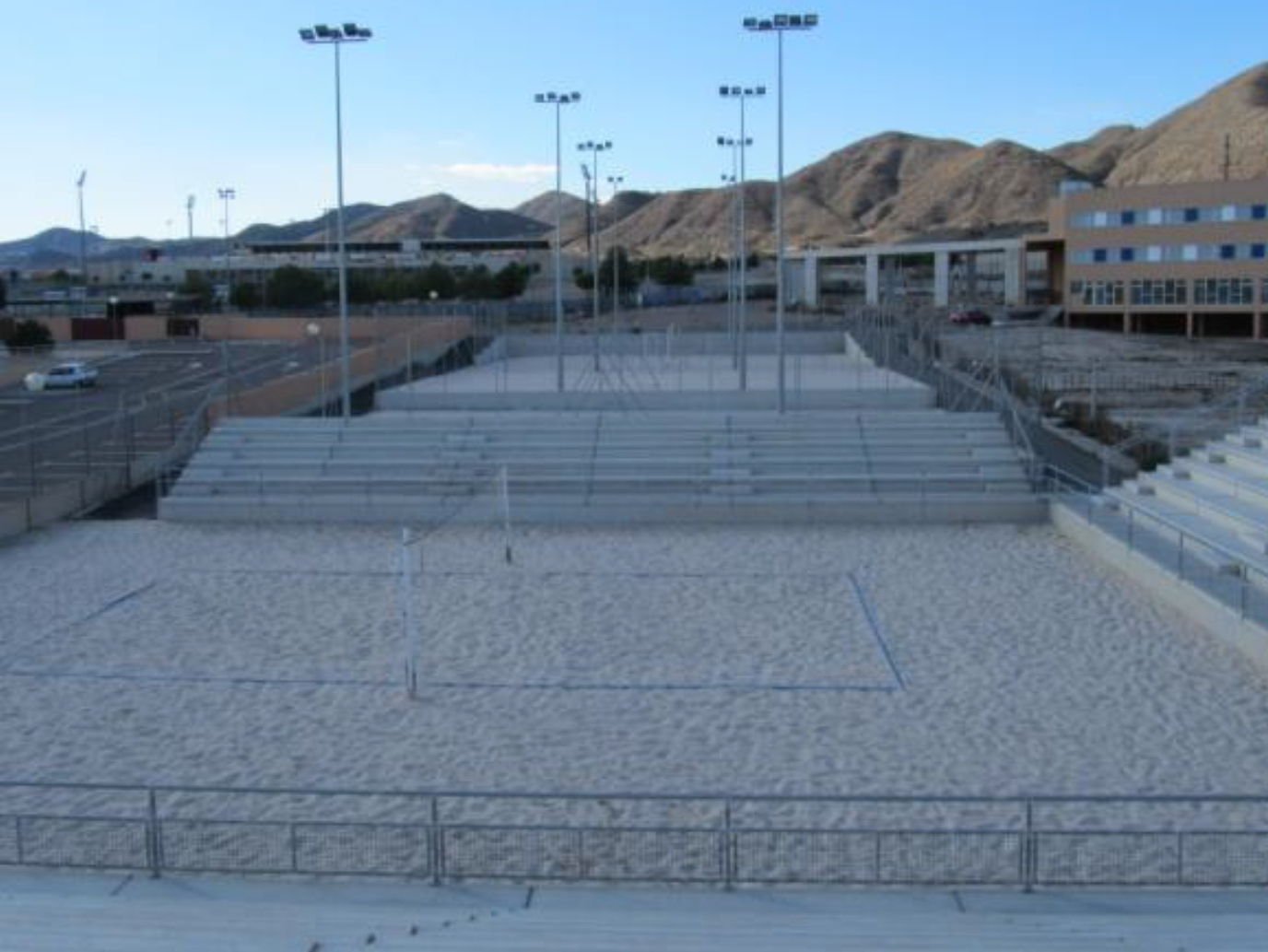 The Spanish training centre in Lorca, Murcia
Belén said she was an "indoor middle blocker because of my height. So, when I started playing beach volleyball, I had to learn to move better and faster, to receive and to set."
As one of eight teenagers in the Sydney Open, Belén said "I am excited about traveling to Australia because I´ve never been there, and it´s known for its beauty. I´m looking forward to playing there and I will have a great time there for sure. When the tournament ends, we´ll go sightseeing because it is an experience that we won´t live in a long time, and we want to take the opportunity to know the city of Sydney."
Belén said her most memorable beach volleyball moment "was when we won gold in the Mediterranean Games last year and the two silver medals we won in Manila and Bangkok. Those two medals were the start of a great season for us."
Belén cites Fran Marco, one of her coaches, in helping her in beach volleyball. "He has been with me for three years now," Belén said. "He helped me always when I needed him, as an athlete but as a friend too."
For Soria, it has been Christian García. "He has been always there for me, and in my worst moment as an athlete, he helped me overcome it," Soria added.
For 2019, Brazilian Marco Antonio Pires will be coaching Belén and Soria.  "He is our coach this season," said Soria. "He is an experienced coach and he has been with teams all over the world. He has been coaching us since we started as a team last year. Our second coach is Fran Marco, and Luis Vita is our physical trainer."
At the end of her q&a session, Soria added "we would like to thank our sponsors - Becas Podium, Unexport, Proyecto FER, Orihuela’s local government and the RFEVB. Without their support, we could not compete or make our dreams come true. Especially traveling to Sydney to compete in a world class event on Manly Beach."