Menegatti & Orsi Toth finding their form at the Chetumal Open 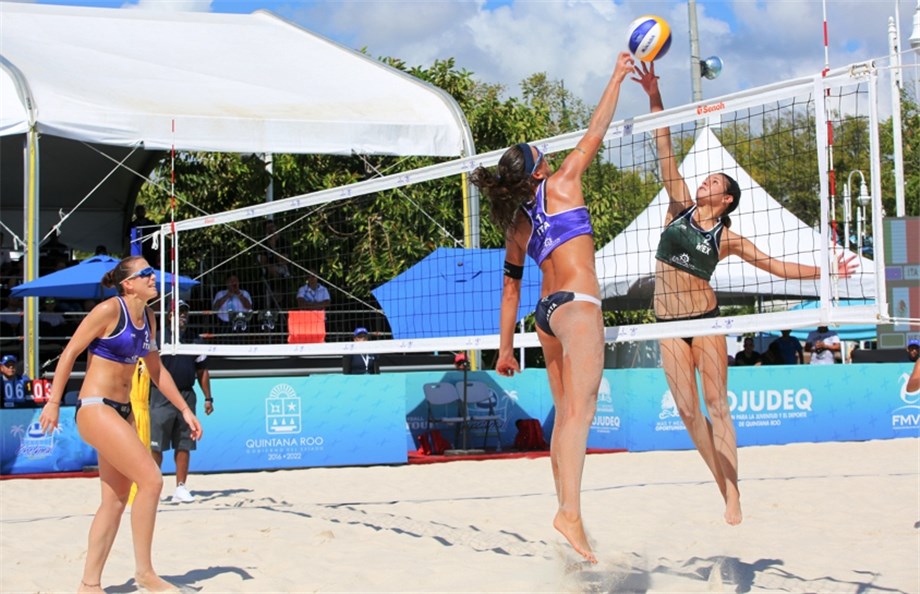 Chetumal, Mexico, October 25, 2018 – Teams from six different countries claimed the top spot of their pools at the Chetumal Open and advanced directly to the Round of 16 of the women-only three-star World Tour event played at the Mexican coastal city on Thursday. 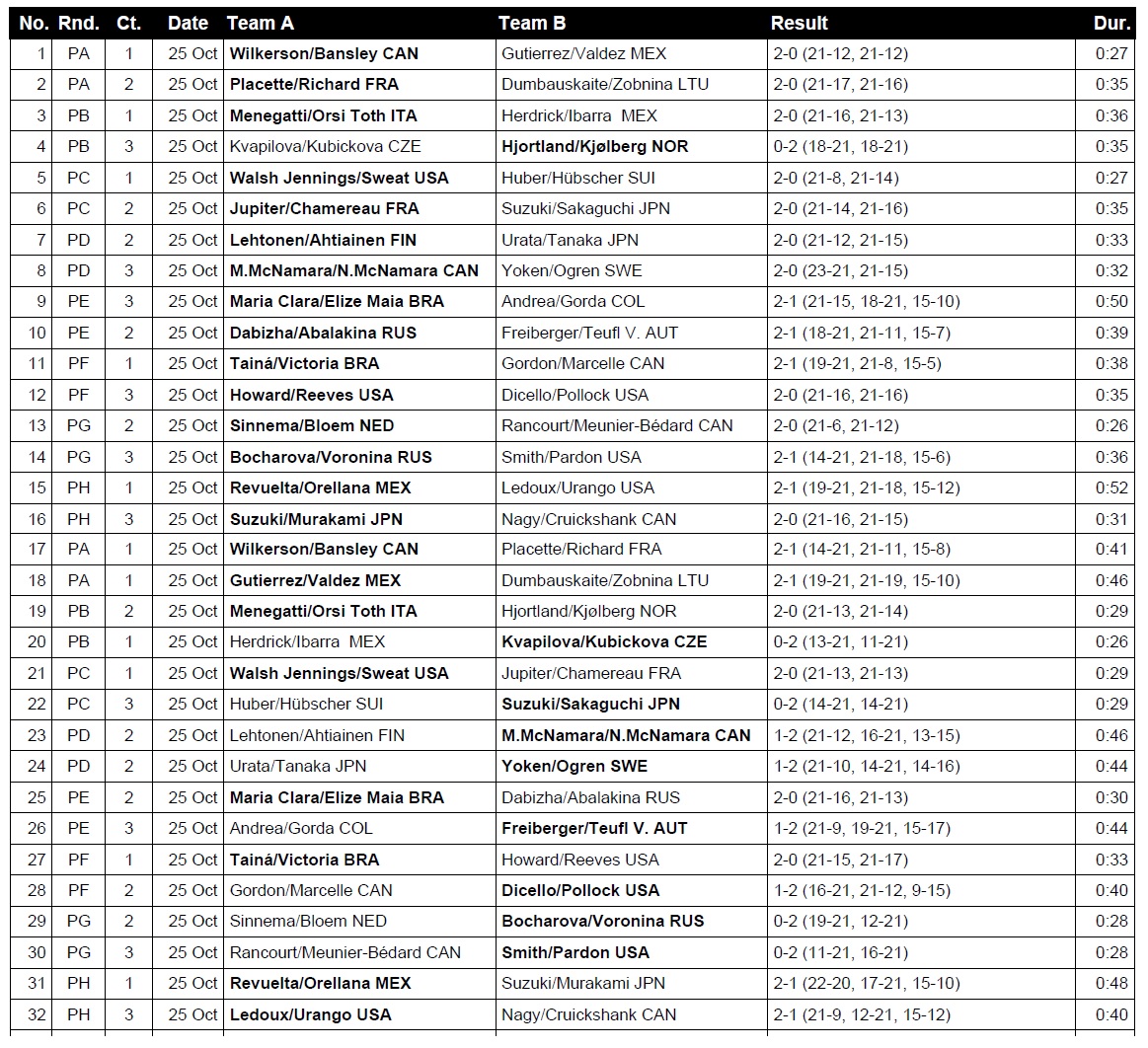 Among them are Marta Menegatti and Viktoria Orsi Toth. The second-seeded team in the event, the Italians came out on top of pool B after back-to-back victories in the first day of the main draw. Menegatti and Orsi Toth debuted with a straight-set (21-16, 21-13) victory over the local team of Silvia Herdrick and Estefania Ibarra.
Later, they prevailed in an all-European matchup with Norway’s Victoria Kjolberg and Ane Hjortland, posting a 21-13, 21-14 win to secure their Round of 16 spot.
“It was great because playing with this weather is very difficult,” Menegatti said. “We just practiced here once, so we are not really adapted just yet. But after these first wins we are feeling better and I hope we can keep winning and moving forward.”
The Chetumal Open is just the seventh event since the Italians reunited forces, three months ago. The Europeans have won a gold and a silver medal already and have finished in the top-ten in all seven events.
“We’ve won a lot of games since then, that’s for sure”, Menegatti added. “But we just want to enjoy every moment to make up for the time we lost. We want to keep progressing together and hopefully we can end the year with a strong finish here in Chetumal.”
The other seven teams to advance directly to the Round of 16 after they won their pools were Canada’s Heather Bansley/Brandie Wilkerson and Megan McNamara/Nicole McNamara, USA’s Kerri Walsh Jennings/Brooke Sweat, Brazil’s Maria Clara Salgado/Elize Maia Secomandi and Taina Bigi/Victoria Lopes, Russia's Maria Voronina/Mariia Bocharova and Mexico's Martha Revuelta/Zaira Orellana.
On the other hand, Lithuania’s Irina Zobnina/Ieva Dumbauskaite, Mexico’s Silva Hendrick/Estefania Ibarra, Switzerland’s Kim Huber/Melina Hübscher, Japan’s Keito Urata/Mai Tanaka, Colombia’s Andrea Galindo/Claudia Galindo and Canada's Julie Gorden/Shanice Marcelle, Hélène Rancourt/Sarah-Jeanne Meunier-Bédard and Megan Nagy/Caleigh Cruickshank are all eliminated after back-to-back setbacks in pool play.
DiCello returns to the sand 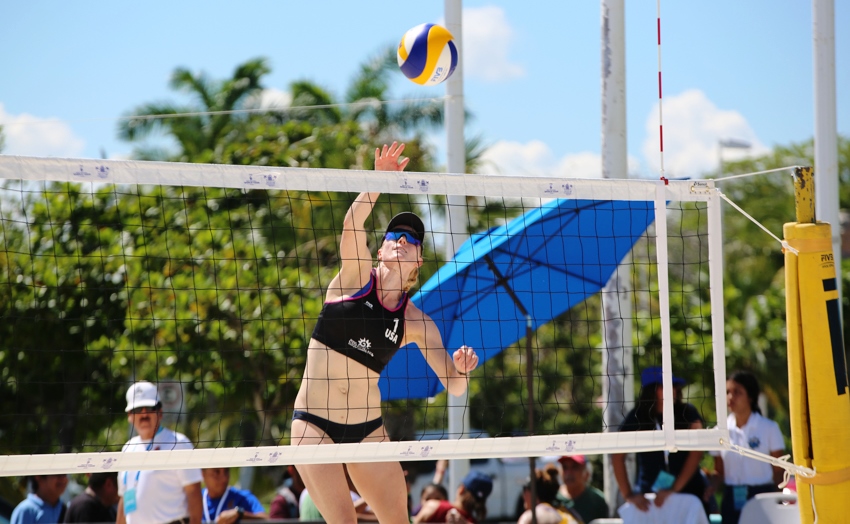 American Kim DiCello gave birth to her first son last June
The Chetumal Open is also highlighted by the return of American blocker Kim DiCello, who had last played in November 2017, at the two-star event in Sydney. The 34-year-old veteran had her first son in June and was invited by Irene Pollock to share the court with her in the Mexican tournament.
The temporary duo had a rough start, losing to fellow Americans Brittany Howard and Kelly Reeves in straight sets (21-16, 21-16), but came back strong to take Canadians Julie Gordon and Shanice Marcelle down in three (21-16, 12-21, 15-9) to remain alive in the tournament and advance to the Round of 24.
“I’m so thrilled to be back”, she said afterwards. “It’s an honour to be here and play against the best again. Irene called me to fill for her partner and I couldn’t say no. We’re going to play each match better than the last. It was so hot in our first game and we faced a really talented team, but we really enjoyed ourselves there and learned a lot. We’ll take these lessons for tomorrow.”
Quick links - Beach volleyball:FIVB Beach Volleyball World Tour - ChetumalFIVB.com - Beach volleyballLatest VideosFacebookTwitterInstagram