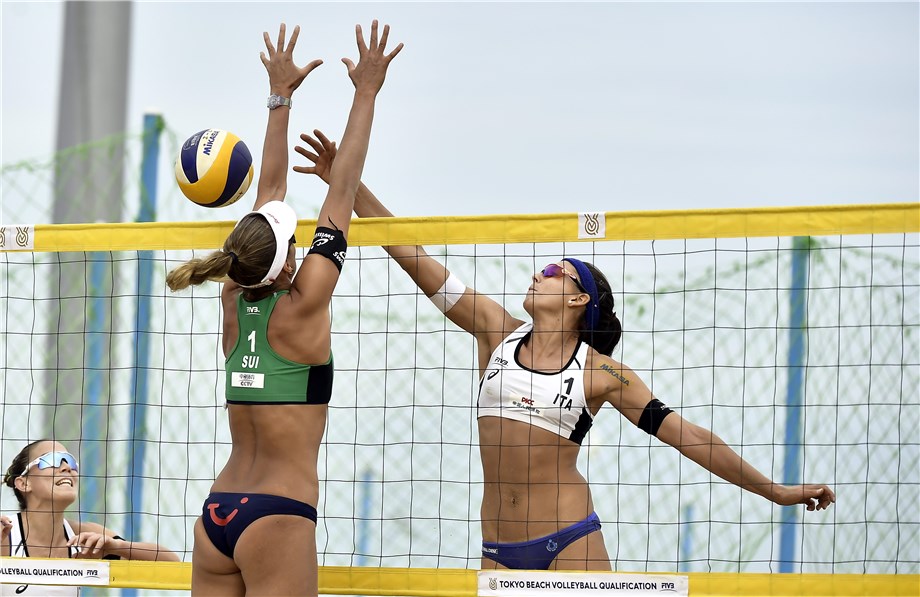 Joining the Italians (Pool F) as European group victors on Thursday were Barbora Hermannova/Marketa Slukova of the Czech Republic (Pool E) and Sandra Ittlinger/Chantal Laboureur of Germany (Pool G).
Spoiling the success story for the continent on Thursday was Fan Wang and Xinyi Xia as the Chinese pair captured Pool H by defeating the past and present European champions, including 2019 winners Tina Graudina/Anastasija Kravcenoka of Latvia and the 2018 gold medal team of Sanne Keizer/Madelein Meppelink of the Netherlands.
By defeating teams from Poland and Switzerland on Thursday, Menegatti and Orsi Toth advanced to Friday's group action with a slot in Pool J along with Ittlinger and Laboureur. The Germans posted wins on Thursday over teams from Spain and Brazil.
"We are just glad to be here," said Menegatti, who is seeking her third trip to the Olympics after placing fifth in London (2012) with Greta Cicolari and ninth in Rio (2016) with Laura Giombini. "Any team can win, and we just need to be playing our best."
Quick links - Beach volleyball:
Tokyo Beach Volleyball Qualification - Haiyang
Facebook
Twitter
Instagram
Menegatti's "any team can win" comment had meaning in the women's competition as only two of the top eight-seeded teams remain in the competition this week. Wang and Xia validated their top seed with three wins in four pool matches while the seventh-seeded Italians have posted a 4-0 group mark.
In Pool I on Friday will be Hermannova/Slukova and Wang/Xia.  Hermannova and Slukova, who defeated the Chinese pair in pool play on Thursday, posted wins on Thursday over pairs from Austria and Finland.
Also advancing to Friday's schedule by finishing second in their pools on Thursday are Elsa Baquerizo/Liliana Fernandez of Spain, Graudina/Kravcenoka, Katarzyna Kociolek/Kinga Wojtasik of Poland and Lena Plesiutschnig/Katharina Schutzenhofer of Austria.
Elsa/Lili and Kociolek/Wojtasik will be competing in Pool I with the Czech and Chinese women while Graudina/Kravcenoka and Plesiutschnig/Schutzenhofer are in Pool J with the Italians and Germany.
The final group phase of the FIVB Tokyo Beach Volleyball Olympic Qualification Tournament concludes Saturday for both men and women.  The top two teams from Pool I and J advance to playoff to determine two berths for the 2020 Summer Games with the men's finale Saturday and the women's Sunday.