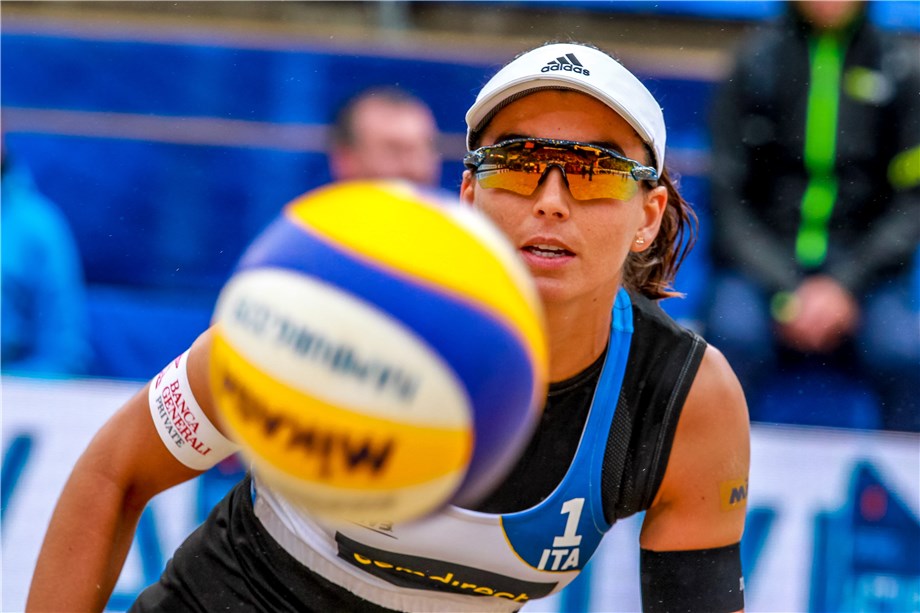 Rome, Italy, August 22, 2019 - When the international beach volleyball circuit returns here September 4 for the start of the US$600,000 FIVB World Tour Finals, two-time Italian Olympian Marta Menegatti is "looking forward to it!"
Quick links - Beach volleyball:
FIVB Beach Volleyball World Tour Finals - Rome
Facebook
Twitter
Instagram
A 10-season veteran on the FIVB, the 29-year old Menegatti will be playing on "home" sand for the first-time in six years as she "is super excited to play in Rome.  For me, it's the best tournament in the world, I've always loved to play there!"
The 2019 FIVB World Tour Finals will mark the international circuit's sixth visit to the Italian capital where the Foro Italico sports complex has previously hosted five men's and four women's tournaments, including the 2011 FIVB World Championships where Brazilian pairs topped both podiums.
In four previous Rome appearances with Greta Cicolari, Menegatti and her London 2012 Olympic partner posted a 15-9 record with fourth, fifth and two ninth-place finishes at the Foro Italico. The 2012 fourth for Menegatti and Cicolari is the best-ever placement for an Italian men's or women's team in Rome. 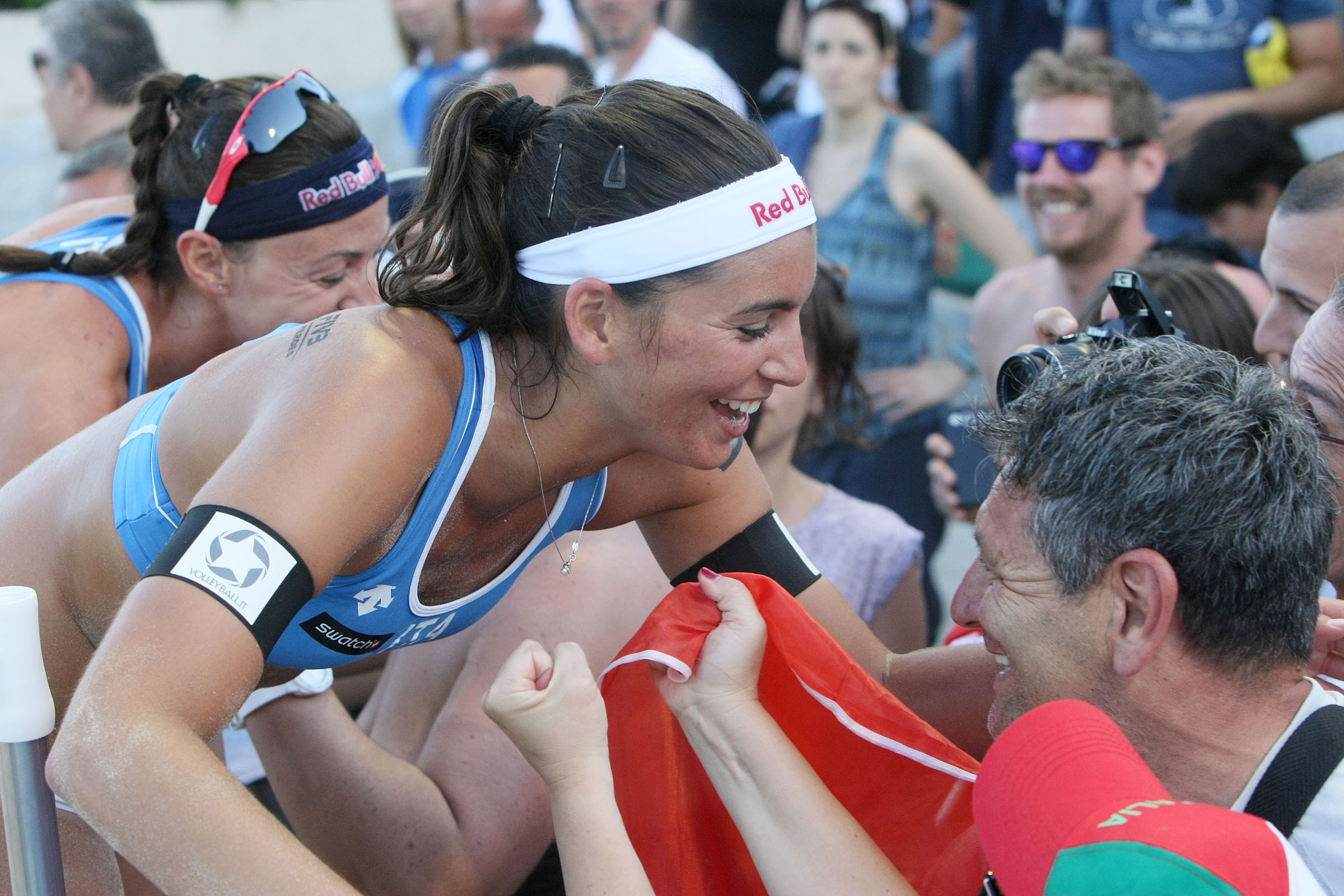 Greta Cicolari (left) and Marta Menegatti with family, friends and fans during the 2012 Rome event at the Foro Italico
When asked if it was more difficult to play on "home" sand with the added pressure of competing before family, friends and fans, Menegatti said "I don't think so. It will be so much fun to play in front of our home fans, I'm looking for it!
Menegatti and current partner Viktoria Orsi Toth are the 20th-ranked team on the 2018-2019 international circuit and enter the FIVB World Tour Finals after placing fifth in their last event August 16 in Moscow, Russia.  Prior to Moscow, Menegatti and Orsi Toth had placed 17th, 17th and 25th in your previous three FIVB events after posting a fifth at the world championships in Germany. 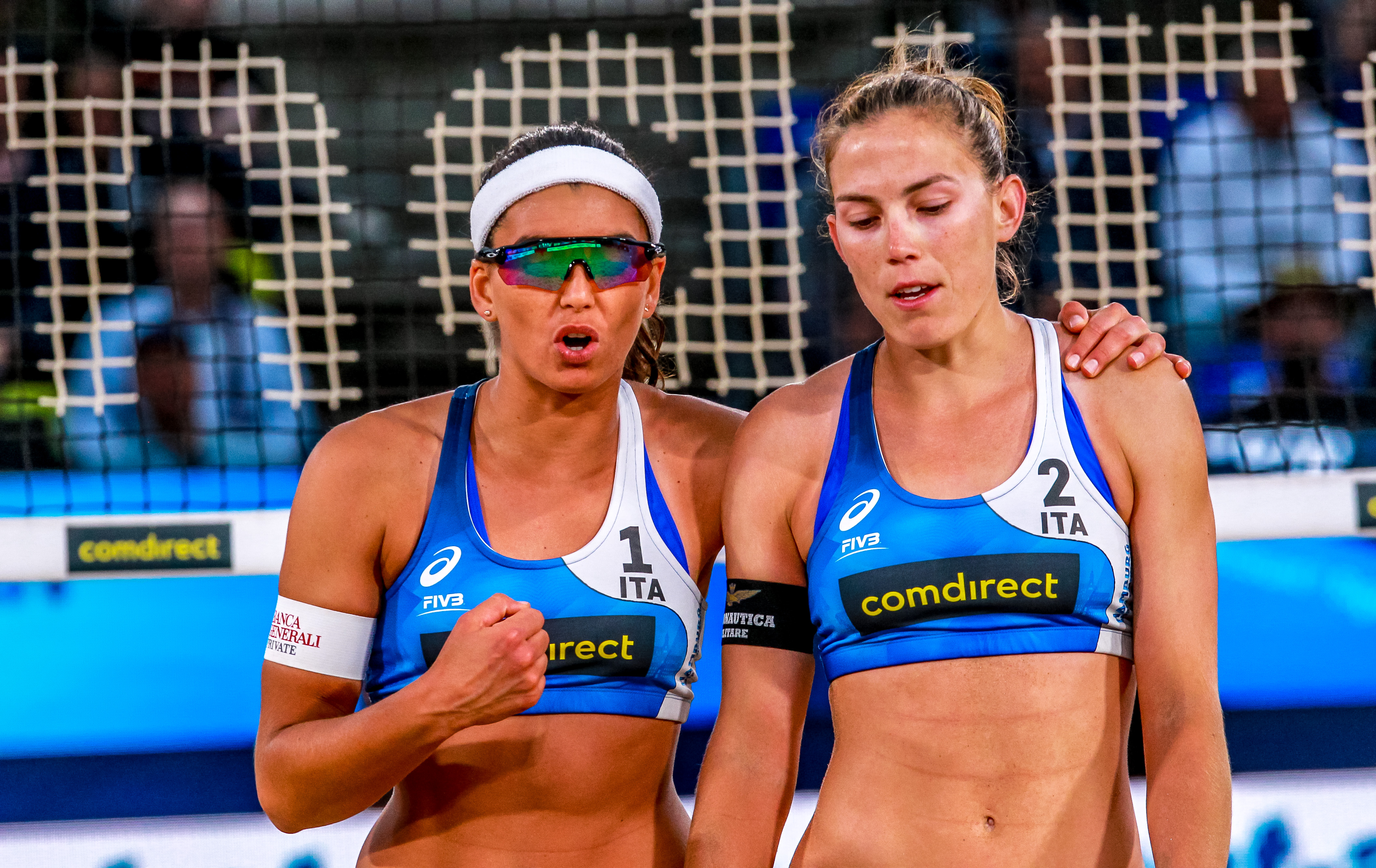 Marta Menegatti (left) and Viktoria Orsi Toth of Italy reached the quarter-finals at the 2019 FIVB World Championships in Hamburg, Germany.
"We worked hard during our pre-season to get to the tournaments well-prepared," said Menegatti.  "The fifth place at the world championship in Hamburg obviously showed this, but unfortunately, right after that, we had some troubles that compromised our team performance."
Menegatti, who played in her first FIVB-sanctioned events in 2006 at the age of 16, said "the level of the teams of the World Tour keeps growing and you have to give always your 100%. We had some bad tournaments, but we managed to stick together and keep fighting. I'm proud of what we have achieved this year and I believe the best has yet to come."
As the Italian to appear in more than any other men's or women's player, Menegatti said she "started playing beach volleyball when I was 15.  I remember that at the beginning, I felt clumsy and I'm not sure why I liked it (beach volleyball) because generally, I like things that I'm good at. For several years I played both indoor and beach volleyball.  In 2009 Lissandro Carvalho convinced me to leave indoor and I'm grateful for that.  He was my first coach when I took part in the senior national team." 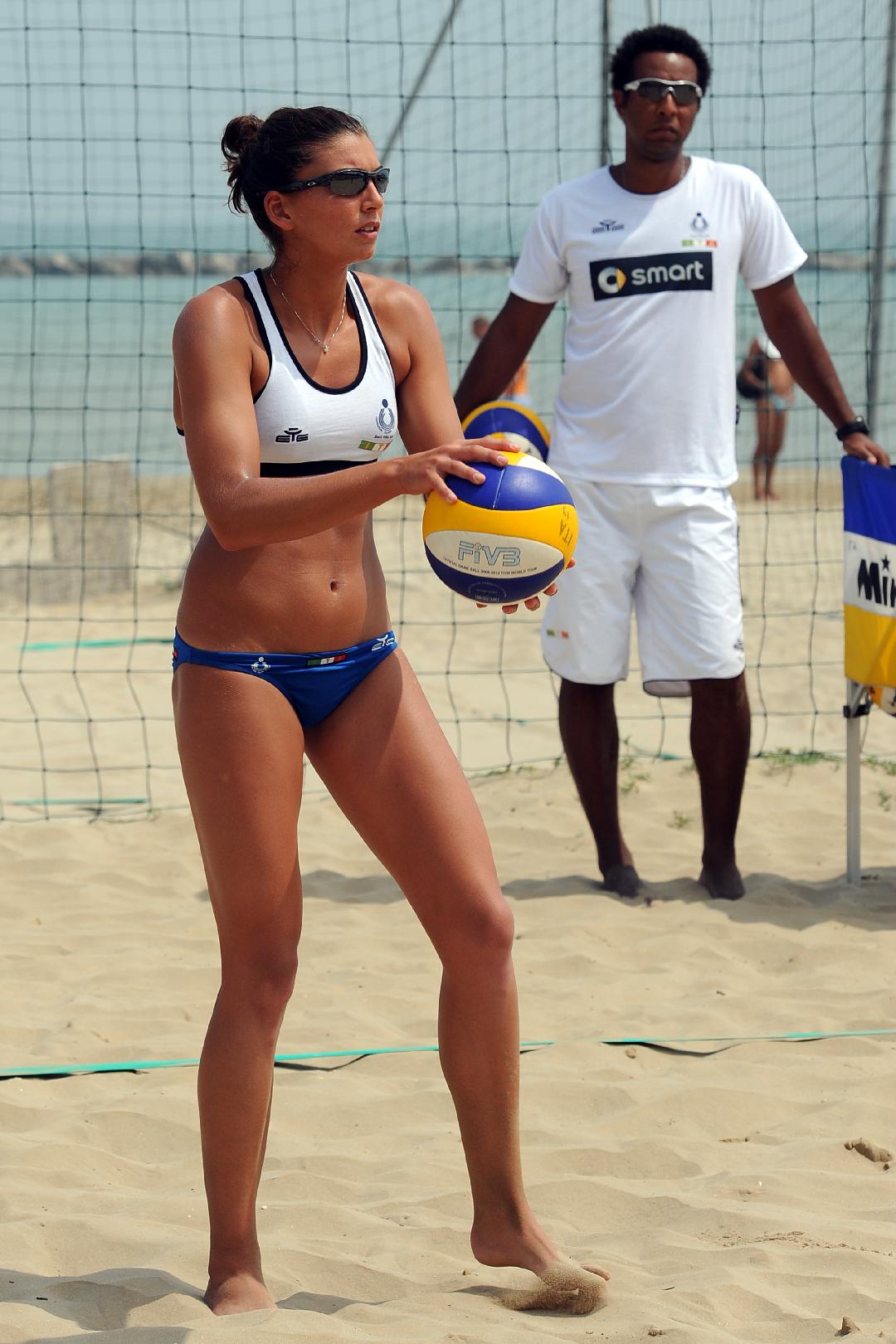 Lissandro Carvalho (right) and Marta Menegatti at a 2011 practice
Since Menegatti is the most experienced Italian men's or women's player in the history of FIVB-sanctioned events, she said the key to her longevity on the international circuit is "about loving what I do and enjoying every moment of this incredible journey!  Also, I'm blessed to be surrounded by amazing people."
At the FIVB World Tour Finals, Menegatti and Orsi Toth will be appearing in their 56th international event together in Rome as the pair has won two gold medals with eight podium placements, 12 "final four" finishes and 23 quarter-finals.
Prior to starting their World Tour partnership in July 2013, Menegatti and Orsi Toth competed in the 2010 FIVB under-21 World Championships in Turkey were the pair finished second after losing a 74-minute gold medal match in Alanya to Tara Roenicke and Summer Ross of the United States. 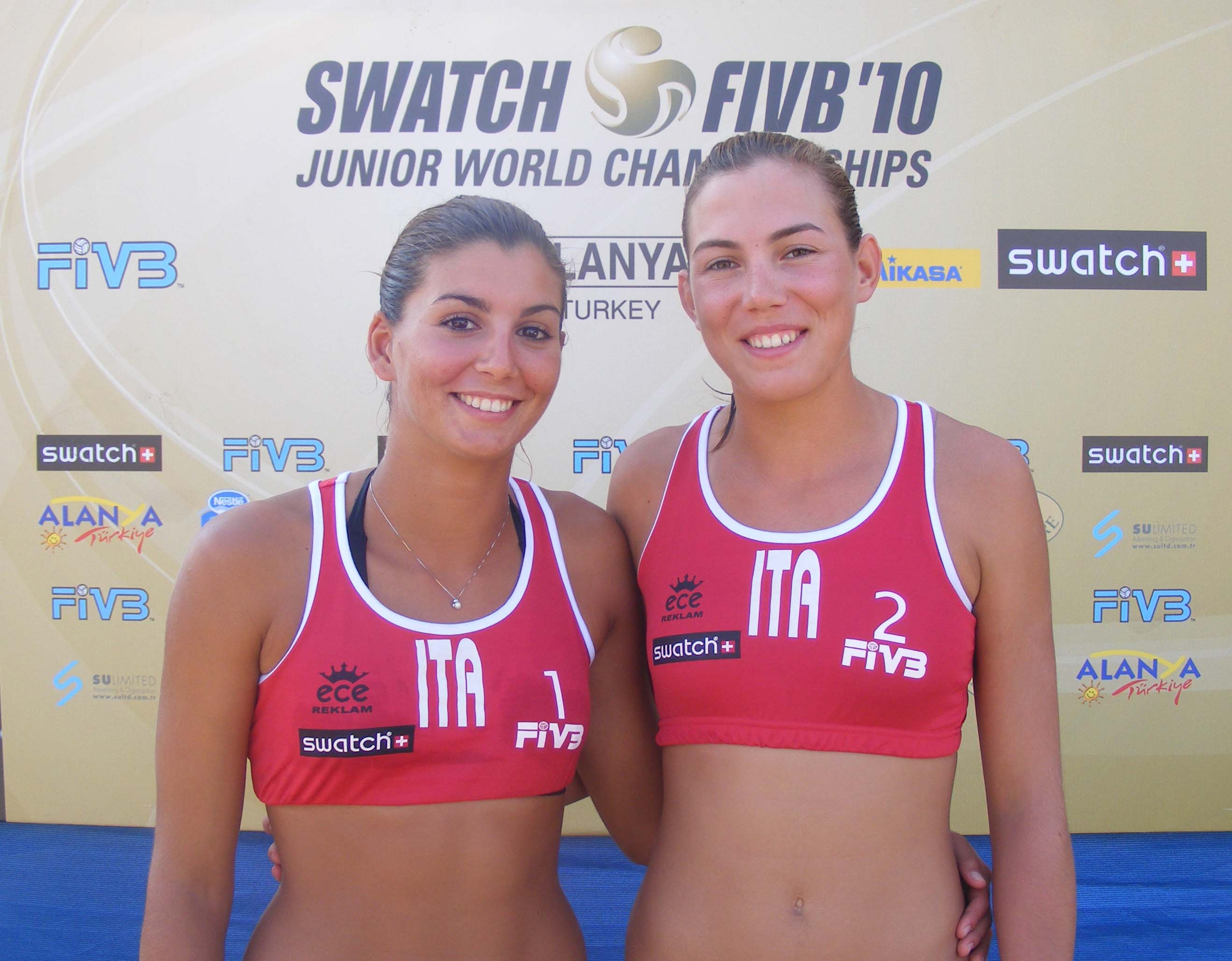 Marta Menegatti (left) and Viktoria Orsi Toth of Italy at the 2010 FIVB under-21 World Championships
"We trust each other, and we are very dedicated and committed," said Menegatti about her current partner.  "As for the next month's event in Rome, we have decided not to compete at the National Championship.  We are going to prepare well for the World Tour Finals, and we will do everything as normal, we’ll do nothing different to what we are used to."
When asked about life being different since playing in her first FIVB event in 2006, Menegatti said "things have changed a lot.  I've played with many different partners; I had the opportunity to play in wonderful places and have amazing experiences. I've learned a lot technically and mentally about this wonderful sport and I'm so grateful for that. I'm still having fun playing especially now with Viki by my side!"
As for memories on the FIVB World Tour, Menegatti said she has "a lot of good memories but I would choose the gold medal in Sochi in 2015 and the gold medal in Agadir in 2018, both won with Viki. Winning the gold in Morocco was magical because that was our first tournament together since 2016."
With a stated goal playing in her third Olympics in Tokyo with Orsi Toth, Menegatti was asked about appearing in the Paris 2024 and Los Angeles 2028 Summer Games.
"Honestly, I just want to focus my energies into the present and do the best I can do to get to the Tokyo Olympics with my team," said Menegatti. "Honestly, Paris 2024 and Los Angeles 2028 are still very far!"