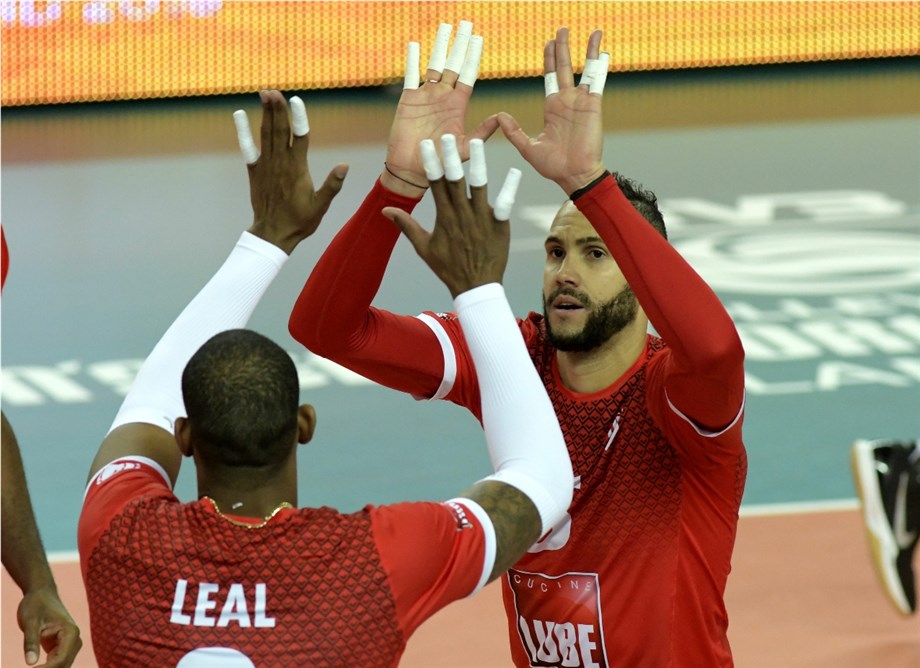 Betim, Brazil, December 2, 2019 – The 6,000 capacity Ginasio Poliesportivo Divino Ferreira Braga in Betim, Brazil is ready to host the FIVB Volleyball Men’s Club World Championship for the fourth time in seven years, but the 2019 edition is arguably one of the most exciting of all as the four clubs competing for the title between December 3-8 have already had a fair amount of success in the tournament.
Quick links - Volleyball:
FIVB Volleyball Men's Club World Championship
Facebook
Twitter
Instagram
Youtube
Hosts Sada Cruzeiro Volei have certainly taken advantage of home court advantage in the past as the Brazilians topped the podium in 2013, 2015 and 2016, the first three times the tournament was played in Betim. The South American giants, who have won five of their first six matches in the 2019-2020 Brazilian Superliga, also won silver in 2012 and bronze in 2017.
Sada Cruzeiro’s roster has been in constant transformation over the last few seasons, but the team continues to have elite-level talent in the form of Brazilian national team players including Rio 2016 Olympic champion opposite Evandro Guerra and 23-year-old setter Fernando ‘Cachopa’ Kreling, and international stars like outside hitters Facundo Conte from Argentina and John Gordon Perrin from Canada. 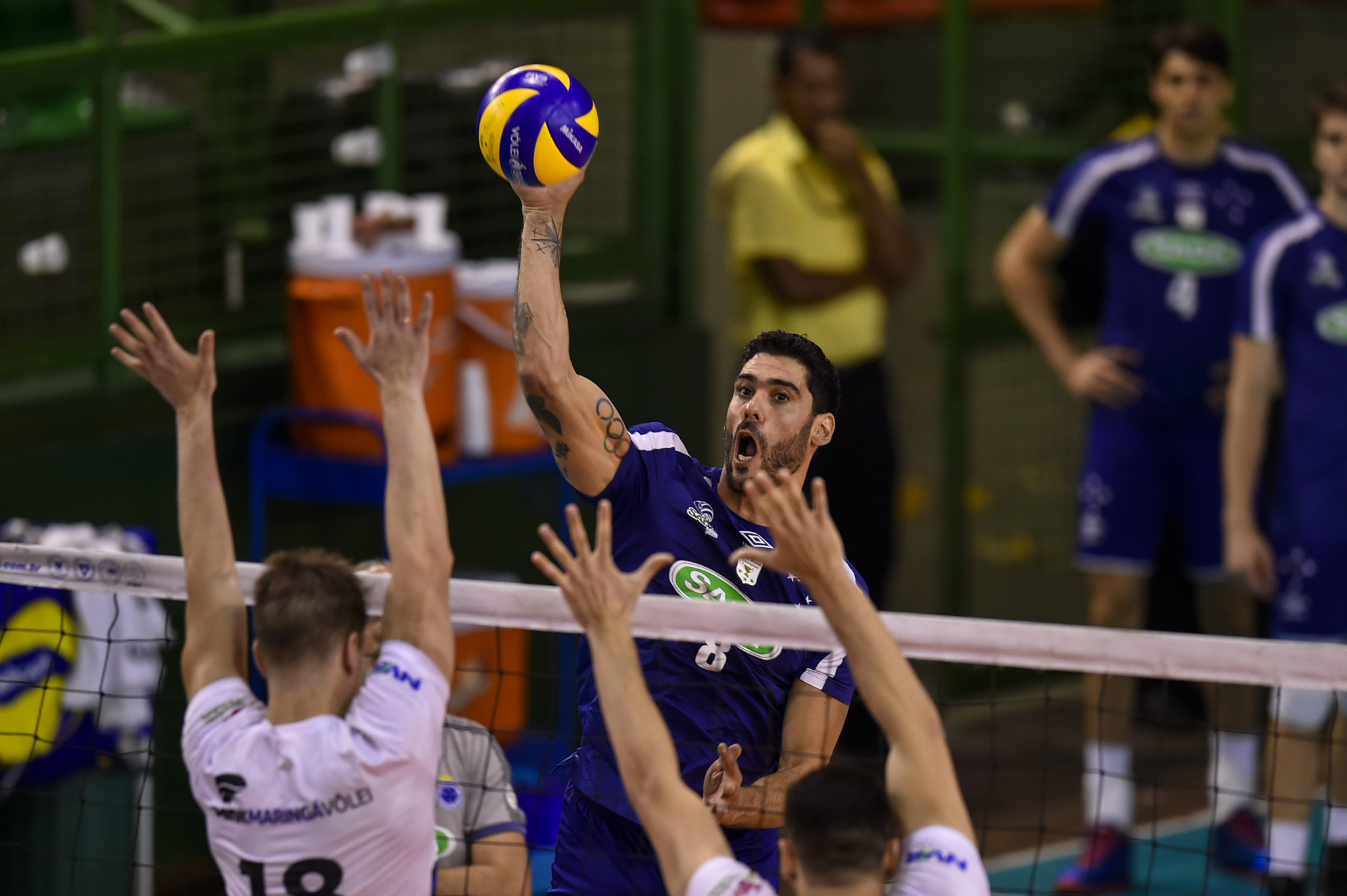 Evandro Guerra is one of the offensive forces of Sada Cruzeiro (Photo: Agenciai7)
Another club participating in the competition, Italy’s Cucine Lube Civitanova is now home to two of Sada Cruzeiro’s former stars – Cuban middle-blocker Robertlandy Simon and Cuban-born Brazilian international outside hitter Yoandy Leal. They form the core of the team that won their first ten matches in the 2019-2020 Italian League, alongside Brazilian Olympic champion setter Bruno Rezende, Italian star outside hitter Osmany Juantorena and Iranian scoring machine Amir Ghafour.
The Italians aim to end 2019 with yet another gold medal following their victories in both the 2018-2019 Italian League and European Champions League. Lube Civitanova played in the last two editions of the Men’s Club World Championship, in 2017 and 2018, but took silver in both.
In the first of their two gold medal match appearances, the Italians were upset by Russian powerhouse Zenit Kazan. Besides gold in 2017, the Russians, who are the second European team in the competition, have collected a pair of silver and a couple of bronze medals at the Men’s Club World Championship as they failed to make it to the podium in just two of their first seven appearances.
Zenit, who have started the 2019-2020 Russian Superleague with six wins in eight matches, topped the podium in four of the last five European Champions Leagues and the team relies on a plethora of Russian internationals, including London 2012 Olympic champion and setter Alexander Butko and opposite/outside hitter Maxim Mikhaylov, but also counts on international star power like French outside hitter Earvin Ngapeth and Bulgarian opposite Tsvetan Sokolov.
Qatar’s Al-Rayyan Sports Club has also already taken home its own Men’s Club World Championship medal. It came in 2014, when the Asians finished second in Belo Horizonte, a neighbor city to Betim. The team also competed among the world’s elite in 2012, when it finished fifth.
Al-Rayyan are set to return after finishing third in the 2019 Asian Club Championship. The Qatari roster has three players with experience in previous editions – Suliman Saad, Ali Bairami and Dahi Mubarak – and three international players – Montenegro’s Marko Vukasinovic, Portugal’s Marco Ferreira and Brazil’s Marcos Vinicius Costa. 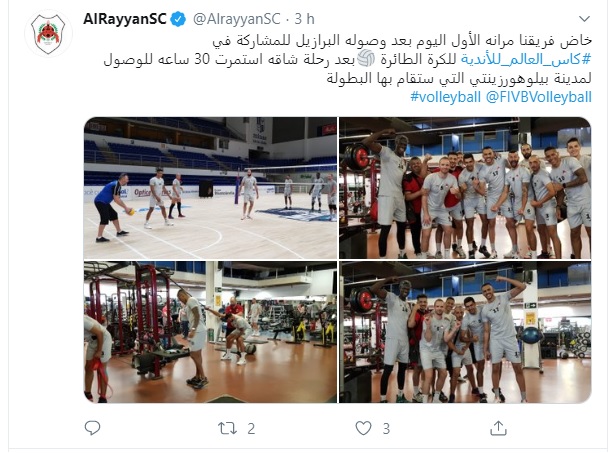 The preliminary round will see each team playing each other in a Round Robin system between Tuesday and Thursday. On the first day, Lube Civitanova will face Al-Rayyan while Sada Cruzeiro will play Zenit Kazan. The second day will see the Qataris against the Russians and the Brazilians against the Italians. The final day will have the Europeans clashing and the South Americans battling the Asians.
After the preliminary round, teams will be ranked from 1st-4th for the semifinals, on Saturday, November 7, when the first will play the fourth and the second will face the third. The medal matches will follow on Sunday, November 8. 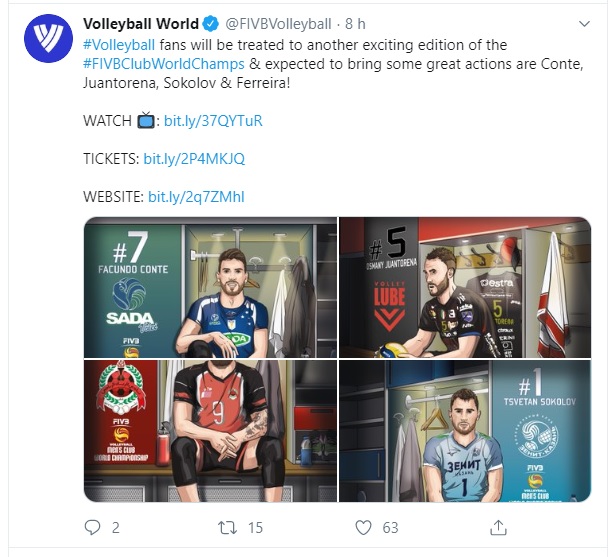