Mexican duo looking for more signs on road to Tokyo

Doha, Qatar, March 9, 2020 – Lombardo Ontiveros and Juan Virgen are keeping their eyes open as the FIVB Beach Volleyball World Tour continues into 2020, starting at the 4-Star Katara Open that began on Monday at the Katara Cultural Village in Qatar’s capital Doha.

Doha, Qatar, March 9, 2020 – Lombardo Ontiveros and Juan Virgen are keeping their eyes open as the FIVB Beach Volleyball World Tour continues into 2020, starting at the 4-Star Katara Open that began on Monday at the Katara Cultural Village in Qatar’s capital Doha. 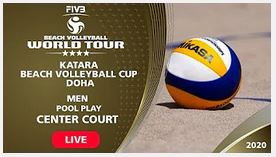 WATCH LIVE - CLICK HERE.
The Mexican pair made it through qualifying with a 2-0 (21-10, 21-18) win over Gambia’s Sainey Jawo and Mbye Babou Jarra on Monday that means they will start in the main draw on Tuesday.
Their hope is that it will act as a spur that drives them on to the Tokyo 2020 Olympic Games having impressed on their Olympic debuts at the Rio de Janeiro 2016 Olympic Games.
“When you are on that road you may enter a tournament in a difficult situation, but when you’ve played a few tournaments you start to see those signs,” Ontiveros said.
“Now we have to start looking for these signs.”
Ontiveros and Virgen enjoyed a ninth-place finish at Rio 2016, and they are currently outside the qualifying places in the FIVB Olympic Rankings.
The pair have played together since 2013 and their most recent podium finishes came in 2017 when they won silver at the Qinzhou 3-Star and bronze at the Olsztyn 3-Star.
They have until the end of the Rome 5-Star on June 14 to find a way into the top 15 who are guaranteed a place at Tokyo 2020, with a maximum of two per National Olympic Committee (NOC).
“The crowd in Rio was crazy because the stadium was so big, and the people and the people love the sport there. A lot of friends, family and my wife came to watch,” Ontiveros said.
“It is good to play alongside Juan. We have played together for a long time, so we know each other very well.”
The men-only tournament in Doha will run from March 9-13 at Katara Cultural Village in the north of the city. It is the second of nine 4-Star events on the 2019-2020 calendar and the winners will leave with 800 ranking points.
Qatar has built up a strong tradition of hosting World Tour events since it hosted its first in 2014. Two more followed in 2015 and 2016, then in 2018 the tournament grew from a 3-Star tournament to a 4-Star tournament.
This website uses cookies to ensure you get the best experience on our website. For more information please read our Cookies Policy.
Ok