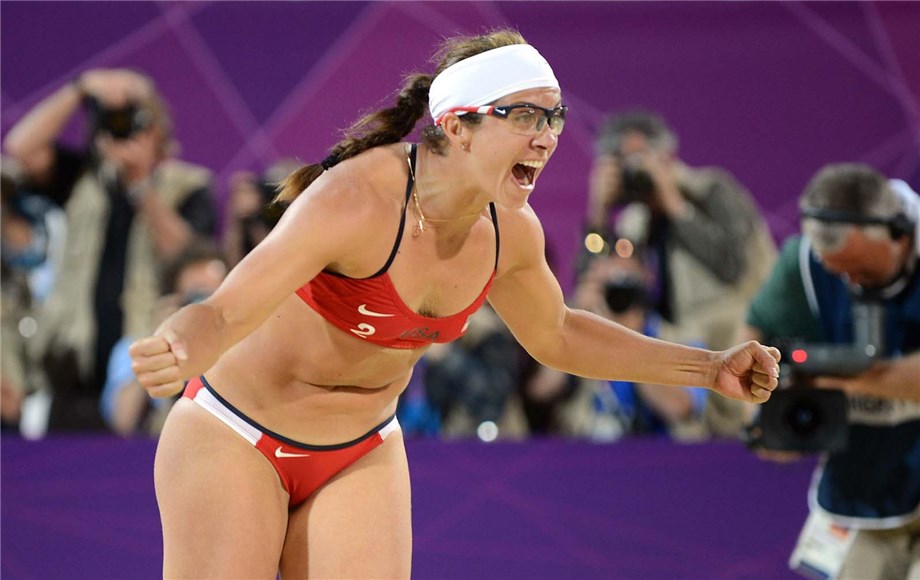 Misty May-Treanor of the United States at London 2012

Orange County, USA, July 30, 2020 - It has been almost eight years since Misty May-Treanor has played on the international beach volleyball tour and over four years since playing a competitive match, but the three-time American Olympic and world champion is still involved with the sport.
Quick links:
FIVB Beach Volleyball World Tour
Olympic Games Tokyo 2020
Facebook
Twitter
Instagram
Youtube
A winner of 112 international and domestic events in 199 appearances, May-Treanor resigned from her four-season coaching position in April and resumed her broadcasting career as part of the announce team for NBC Sports and Prime Video the past two weekends at the restart of the American domestic tour at a venue next to an arena where the volleyball competition was held at the Los Angeles 1984 Olympic Games. 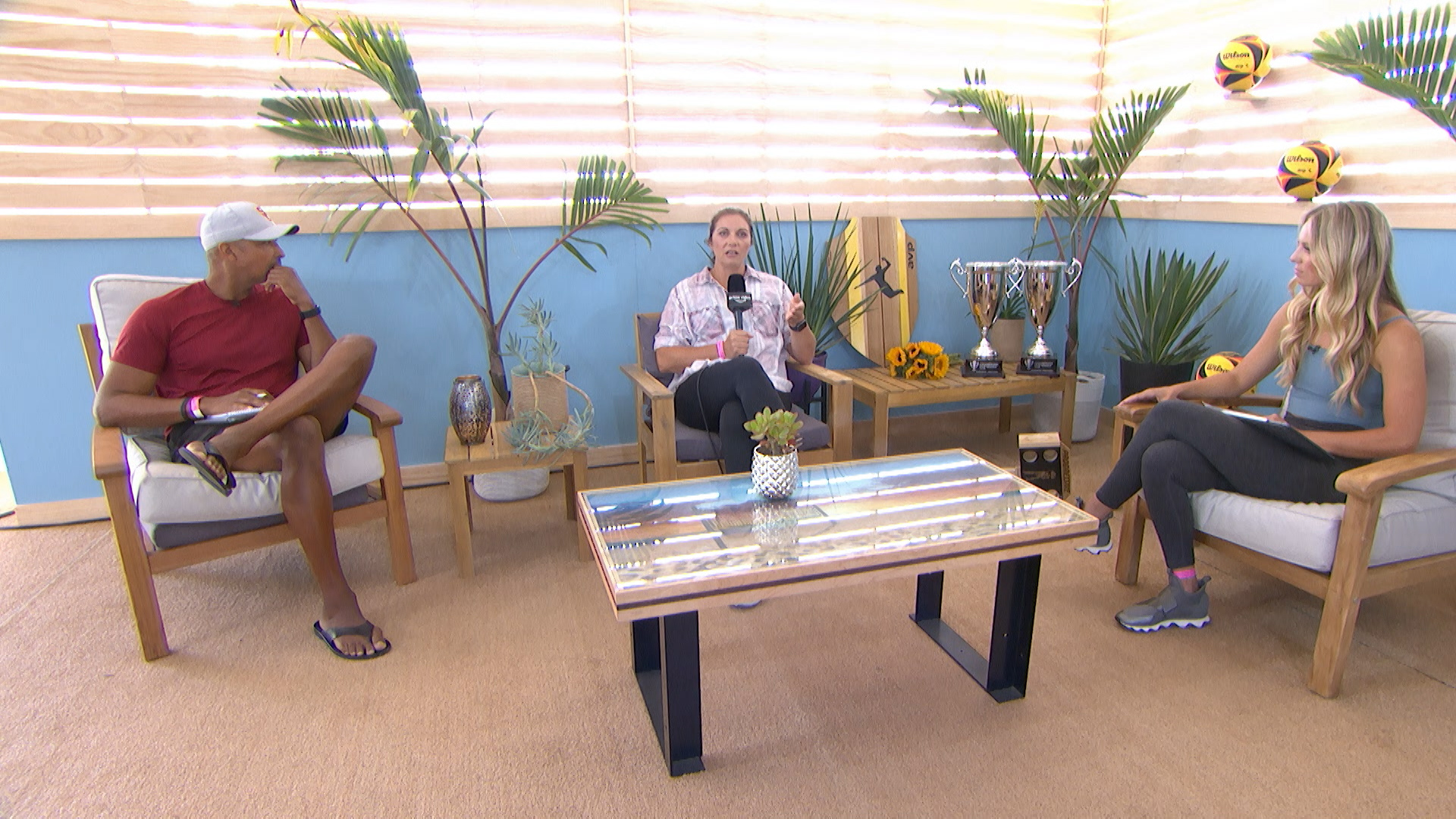 Misty May-Treanor (centre) as television commentator on Prime Video with Dain Blanton (left) and Camryn ‎Irwin
"Since I feel like birthdays just blend in with every other day, I will be spending July 30th at home with Matt and the kids hopefully by the pool," said May-Treanor, who celebrates her 43rd birthday today. "Matt is having a minor surgery tomorrow. Since I share birthdays with my father in law, we went out to a birthday dinner last night with Matt’s parents.  We went to our favourite restaurant - The Anaheim White House." 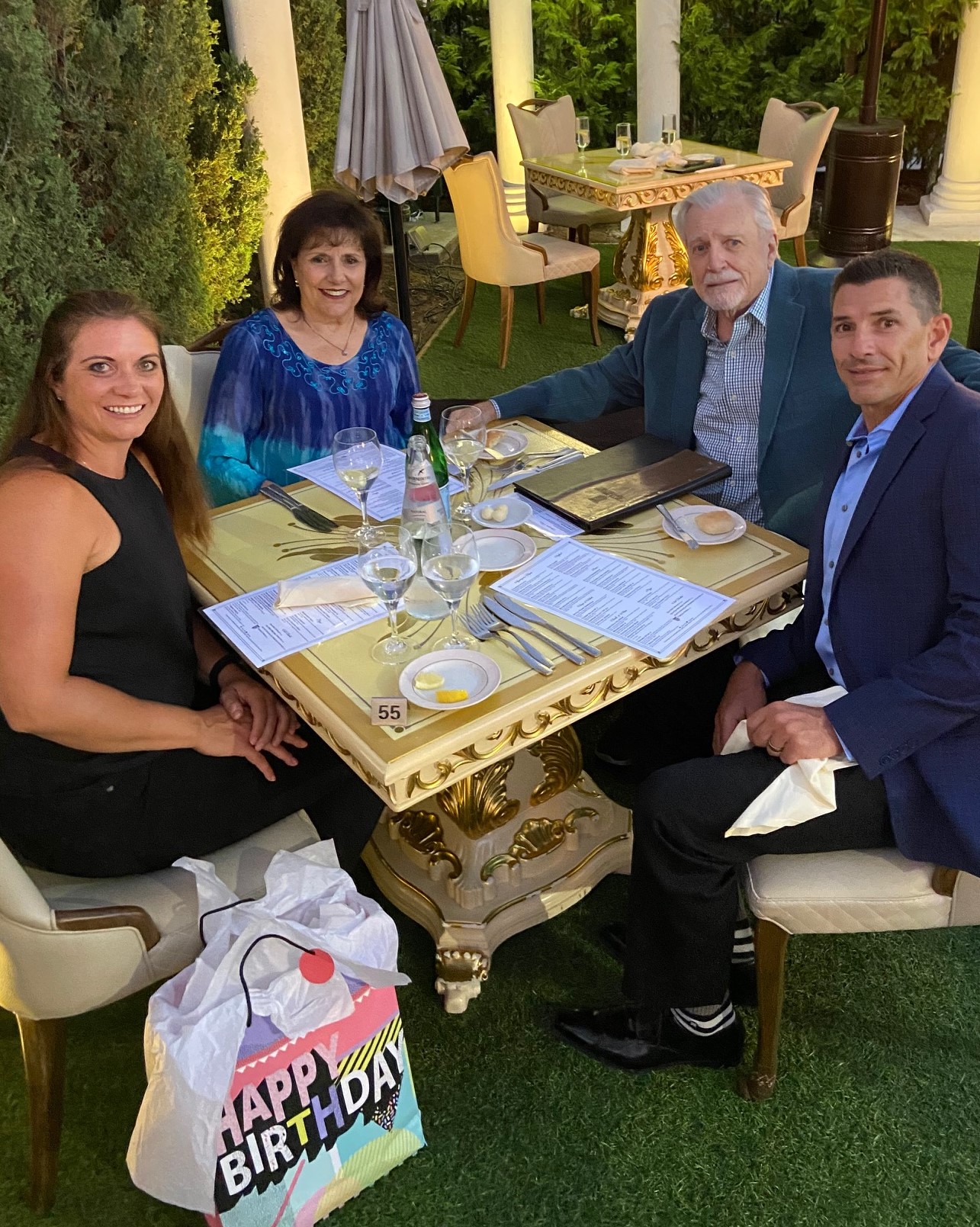 Birthday celebration for Misty May-Treanor (left) with husband Matt (right) and her in-laws - Mike and Carmela Treanor
As for the last four months with the coronavirus pandemic, May-Treanor said she was "Decluttering.  I don’t think I have ever had this much time off. We also moved a year ago and are still rearranging the house. I also am giving private lessons when I can work it in. I fortunately have been able to stay busy during this time."
As for stepping down as the volleyball and beach volleyball coach at Long Beach Community College, May-Treanor said she is "spending more time with her family and on travel when allowed, I am reuniting with friends and family, doing the television commentating and playing a lot more golf and tennis.
During her four seasons at Long Beach City College, May-Treanor led the Vikings’ indoor team to a 79-22 overall record and 34-2 in the South Coast Conference (SCC). The 'Vikings' made the playoffs every year under May-Treanor and won a pair of conference titles. She was the SCC coach of the year twice. On the beach, May-Treanor led the Vikings to a 37-13 overall record (16-4 SCC mark).

Long Beach City College coach Misty May-Treanor
As for playing on her birthday, May-Treanor played three FIVB World Tour matches on July 30 highlighted by a 2005 gold medal win (2-0 (21-17, 21-15) in 46 minutes) over Brazilians Juliana Felisberta and Larissa Franca in Paris.
"Paris was always a great event," said May-Treanor, who teamed with two different partners to win 43 FIVB World Tour gold medals. "I was sad when they took it off the schedule. I remember feeling relieved after that match.  Larissa and Juliana were always so tough. I think my dad was with me and we went shopping after the finals and of course had a crepe with Nutella and coffee."
Another birthday win was the London 2012 Olympic Games where she and Kerri Walsh Jennings posted a 2-0 (21-14, 21-19) win in 36 minutes over Kristyna Kolocova and Marketa Slukova of the Czech Republic.
"It was my 35th birthday, and again it was a relief that we won," said May-Treanor, who did not lose any of her 28 matches in three Olympics with Walsh Jennings. "I celebrated with a drink after the match. My family met at the hotel and then I got into my hotel room for ice bath and late night meal. I think the crowd sang happy birthday which was really neat and thoughtful. Again, we were there on a mission, so I didn’t think much of it." 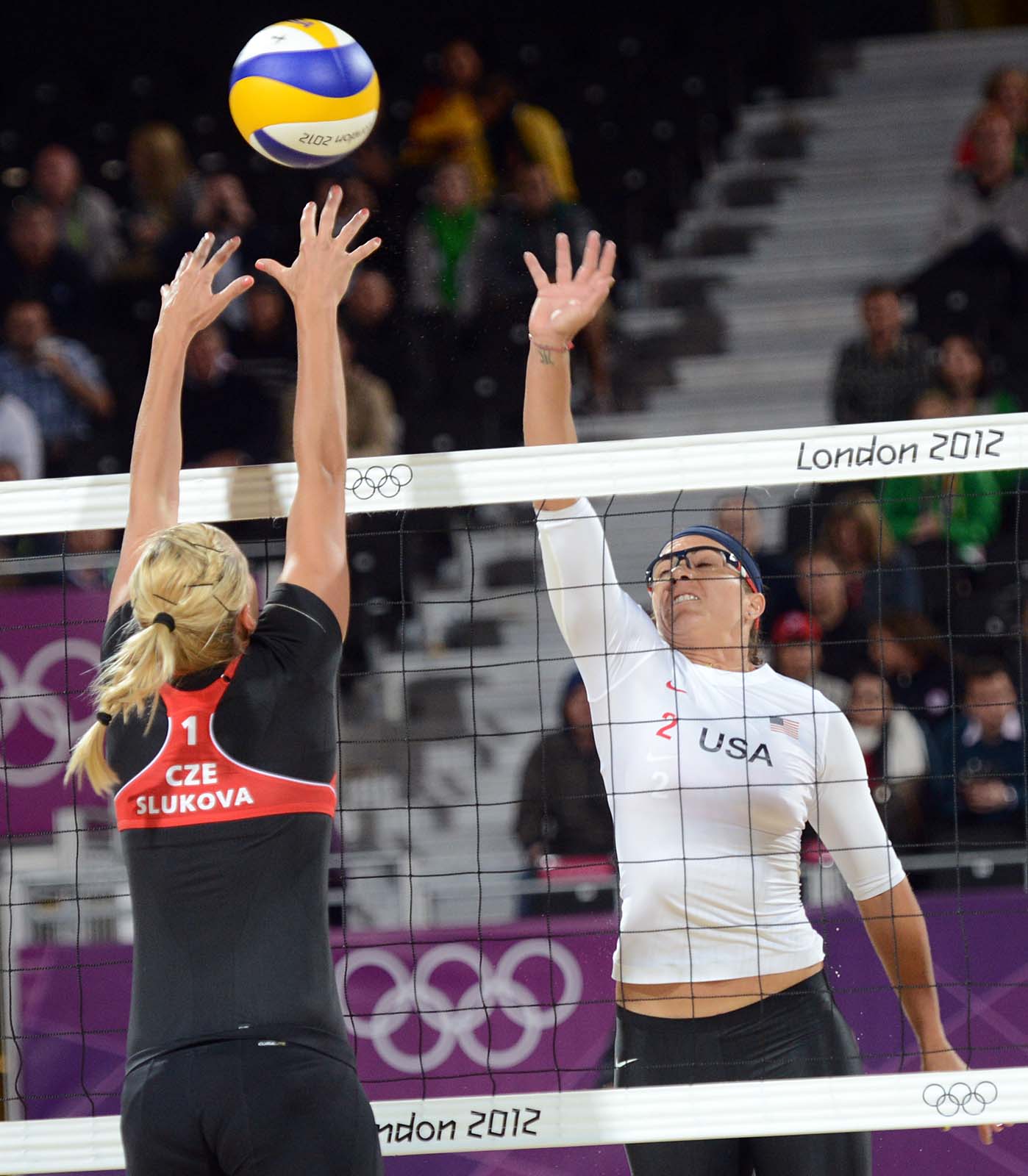 Hitting at the London 2012 Olympic net is Misty May-Treanor (right) of the United States against Marketa Slukova of the Czech Republic
When asked about her memories playing on the FIVB World Tour, May-Treanor said there are "too many to write down. I feel like I grew up on the international circuit. The player parties were always fun. My birthday always fell during the Klagenfurt event and I would celebrate at my favourite restaurant."
May-Treanor teamed with Walsh Jennings to win five gold medals (2002, 2003, 2005, 2007 and 2011) in Klagenfurt as the pair also placed fifth in 2006 and ninth in 2001. The legendary American pair posted a 41-2 record in Klagenfurt with both losses to Chinese Olympic pairs in 2001 (Rong Chi/Zi Xiong) and 2006 (Jia Tian/Jie Wang). 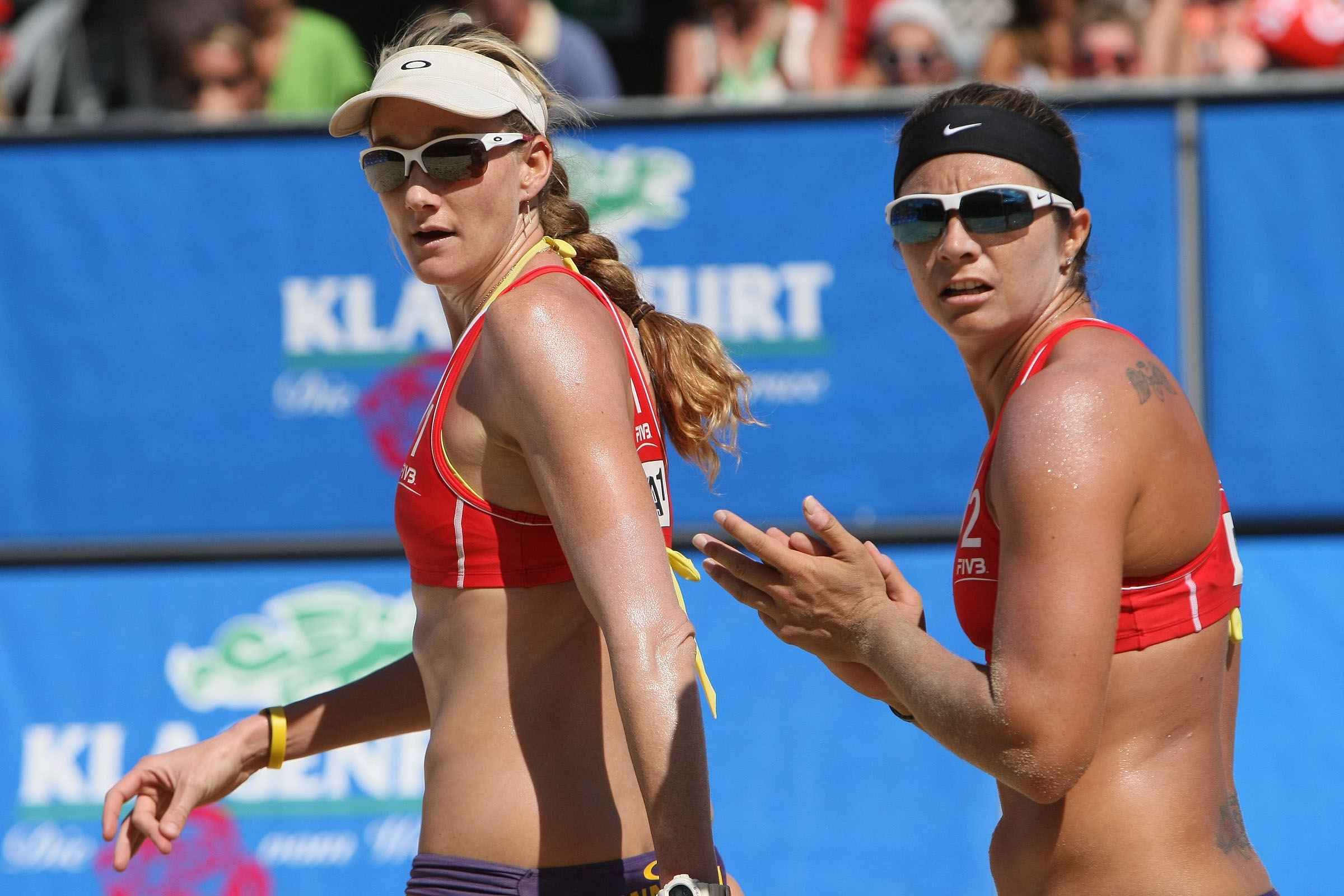 Americans Misty May-Treanor (right) and Kerri Walsh Jennings at the 2011 Klagenfurt Grand Slam
Married to former professional baseball player Matt Treanor and the mother of three, May-Treanor also remembers "the crazy train rides, cab rides, so many different countries visited, the many great fans I met, the many wonderful friends and competitors I got to meet and play against.  As a player I will never forget the winds in Marseille or the torrential downpour that flooded the court in Toronto when I played with Holly (playing in trash bags). I won’t ever forget winning our first FIVB in Portugal with Kerri or winning our first cowbell (Gstaad) and sword (Stavanger). I am so thankful for the journey." 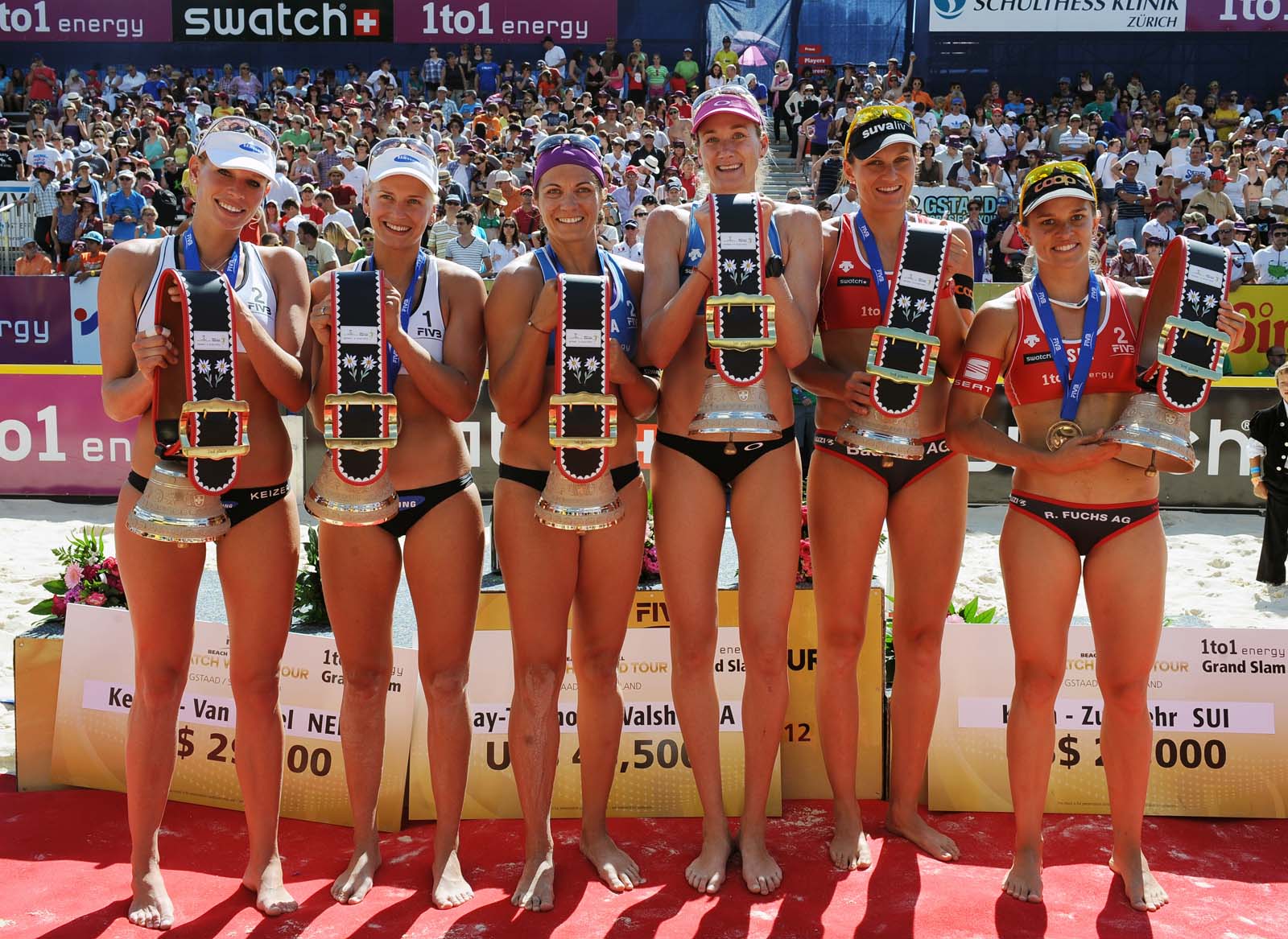 The 2012 Gstaad podium (left to right) with cowbells featured Sanne Keizer, Marleen Van Iersel, Misty May-Treanor, Kerri Walsh Jennings, Simone Kuhn and Nadine Zumkehr.
As for opponents on the FIVB World Tour, May-Treanor said the "Brazilian teams were always tough. Their ball control is always amazing and the passion they play with is like no other. I learned so much from them as well. Adriana (Behar) and Shelda (Bede) but also Juliana and Larissa.  Don’t get me wrong, the world tour was tough. Every country had their own style and I appreciated being pushed to our limits every time we played the other teams."
As for her favourite beach volleyball venues, May-Treanor added “I really do like everywhere I have played. Gstaad and Klagenfurt have a tight hold on my heart."
May-Treanor and Walsh Jennings won six gold medals (2002, 2003, 2004, 2006, 2007 and 2011) in Gstaad as the pair compiled a 51-3 match mark in the Swiss Alps village. The 2007 Gstaad title was at the FIVB World Championships where they defeated two Chinese teams (Chen Xue/Xi Zhang in the semifinals and Jia Tian/Jie Wang in the finals) that they would share the podium with at the Beijing 2008 Olympic Games.
One of world most idolized beach volleyball players, May-Treanor noted "I got to play with and against my idols growing up (McPeak, Liz Masakayan, Elaine Youngs and Barbra Fontana) with Jackie Silva being one of those that I idolized. Also, not on tour but at the Beijing Olympics I got to meet another of my idols and take a picture with her that I am framing  It was Cuban star Mireya Luis." 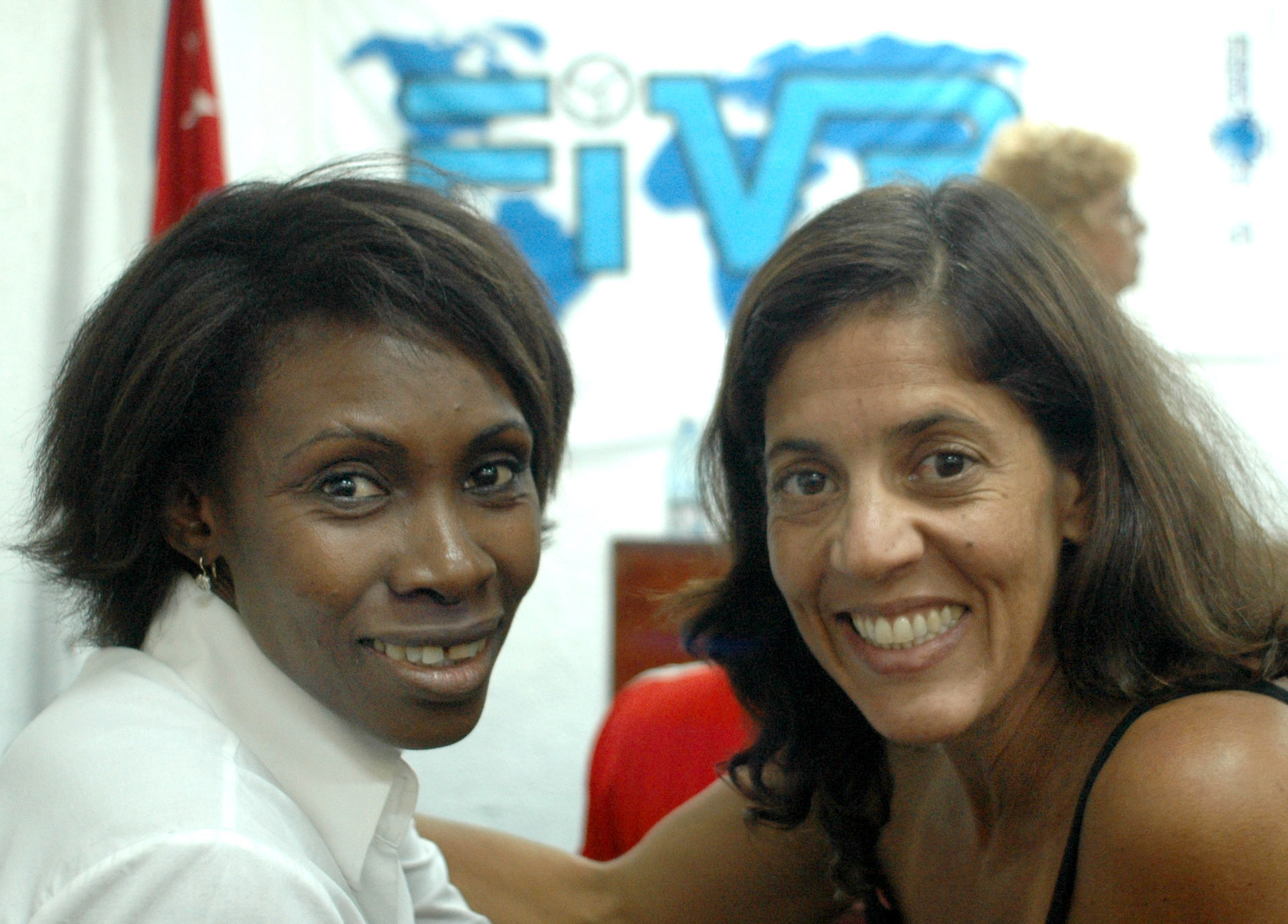 Two players that Misty May-Treanor idolizes - Cuban Mireya Luis and Brazilian Jackie Silva
As for her partnership with Walsh Jennings, May-Treanor was quoted in an olympic.org article in November 2019 (How May-Treanor and Walsh Jennings "danced" to victory) that "if there was a bad dig, I knew Kerri would go and make the best play she could for it. Because we wanted our partner to succeed, it gave that partner freedom to make mistakes. We knew the other person was there to help."
In 13 seasons on the FIVB World Tour playing with three partners, May-Treanor competed in 99 events with appearances in 61 finals and 75 semifinals and placement on 69 podiums. She won over $1-million in prize money and posted a 541-85 match with an all-time best winning percentage of 86.4.
May-Treanor and Walsh Jennings' record was more impressive as the American posted a 435-55 match mark with an all-time best winning percentage of 88.8. May-Treanor and Walsh competed in 77 FIVB events with 40 gold medals, 54 finals, 60 medals and 63 semifinal appearances.
“If you play together for years and years, you kind of feel it," said May-Treanor about her partnership with Walsh Jennings in the olympic.org article.  Volleyball is really a dance - you see those professional dancers; they know what the next move is without verbalizing and that is how Kerri and I were. We had played together for so long; you get used to seeing movement and you think the same. If you go in with a game plan and you think alike, that is when the dance happens.”
To support May-Treanor credentials, the players and coaches on the FIVB World Tour honoured her as the international circuit's most outstanding performer in 2005 and 2008. She was also named the World Tour’s best offensive player (2005, 2007 and 2008), best defensive player (2007, 2008 and 2011) and top sportsperson (2007, 2008 and 2010) three times and the best setter (2005) and most inspirational (2011) once.