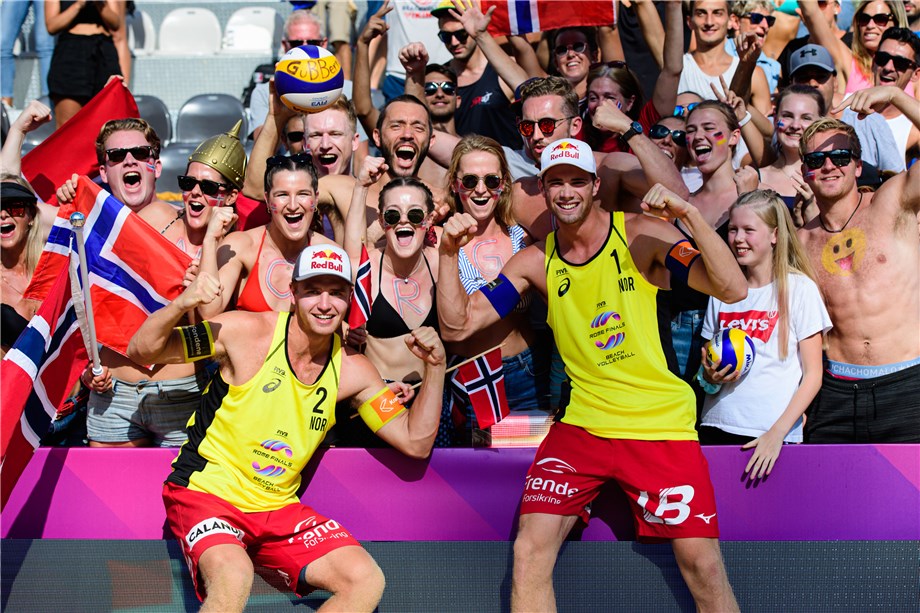 Christian Sorum (left) and Anders Mol with their Norwegian and Italian fans Saturday after winning a quarterfinal match at the FIVB World Tour Finals in Rome at the Foro Italico.

Rome, Italy, September 7, 2019 - Anders Mol and Christian Sorum continued their winning ways here Saturday afternoon at the US$600,000 FIVB World Finals as the Norwegians posted their 24th-straight win on the international beach volleyball circuit with a two-set quarter-final victory over Evandro Goncalves and Bruno Oscar Schmidt of Brazil.

In improving their 2018-2019 season record to 70-4, the second-seeded Mol and Sorum scored a 2-0 (21-17, 21-16) win in 38 minutes over the 10th-seeded Evandro and Bruno, who defeated the Norwegians earlier this season in the gold medal match at the Warsaw Open in Poland.
Mol and Sorum, the FIVB World Tour's top-ranked team for 59-straight weeks, now meets Russian world champions and third-seeded Viacheslav Krasilnikov/Oleg Stoyanovskiy in the second of two semifinal matches Saturday evening at the Foro Italico.  Mol and Sorum have won two of three FIVB matches with the Russians this season.
In the first men's semifinal match Saturday, fifth-seeded Julius Thole/Clemens Wickler of Germany are challenged by 17th-seeded Taylor Crabb/Jake Gibb of the United States.  The Americans won their only match with Thole and Wickler with a pool play win last month in Moscow.
Three of the four teams in Saturday's semi-final also comprised the final four at early July's FIVB World Championships in Germany as Krasilnikov and Stoyanovskiy defeated Thole and Wickler for the gold medal while Mol and Sorum edged Tri Bourne and Trevor Crabb of the United States for third-place.  And yes, the Crabbs are brothers.
With the FIVB World Tour returning to the Italian capital for the first time since 2013, the men's and women's medal matches will be played Sunday evening where the winning pairs claim the $40,000 first-place prizes and 1,200 qualifying points for the Tokyo 2020 Olympic Games.