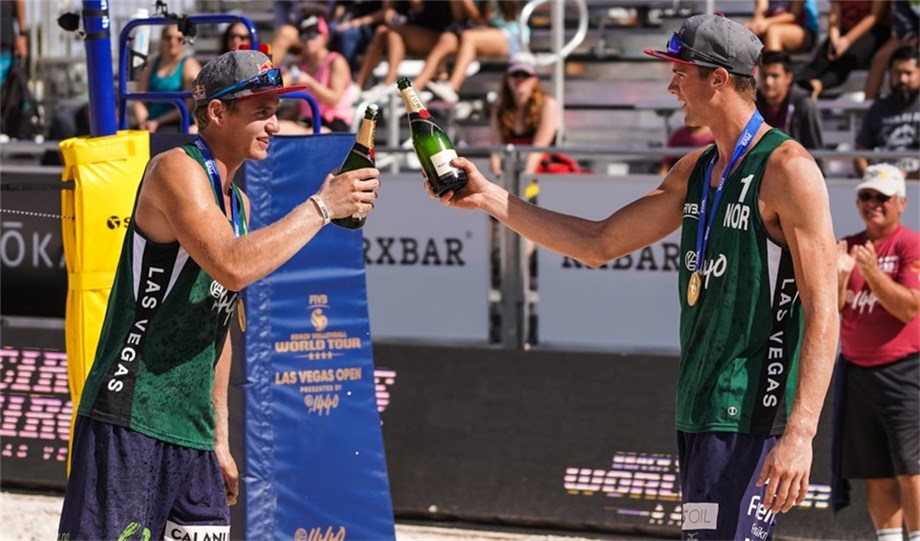 Las Vegas, USA, October 21, 2018 – Anders Mol and Christian Sørum topped the first-ever all-European FIVB Beach Volleyball World Tour podium on American soil as the Norwegians defeated Poland’s Grzegorz FIjalek and Michal Bryl in straight sets 2-0 (21-13, 21-17) to claim the gold medal of the Las Vegas Open presented by p1440 on Sunday.
Russians Oleg Stoyanovskiy and Viacheslav Krasilnikov completed the all-European podium in the four-star event as they defeated USA’s Tri Bourne and Trevor Crabb in a three-set 2-1 (21-13, 18-21, 20-18) battle for the bronze medal.
The world ranking leaders, the 21-year-old Mol and the 22-year-old Sørum remain in dominant form as the Beach Volley Vikings have won each of the last four World Tour events they have played at, including the 2018 World Tour Finals in Hamburg last August.
“What’s happening with us still seems unreal,” Sørum commented. “These last few months have been crazy and it’s great to end the year on a high. Now we have three weeks off and after that we head to Tenerife to start preparing for 2019. It’s an important season and we want to keep up the good results.”
It was the fourth-straight victory of the Norwegians over the Polish in just over two months, including gold medal match triumphs in Vienna, Hamburg and Las Vegas. To Mol, the team’s high attention level was crucial for another solid performance.
“Every match against them is different, but we played a really good game even though it wasn’t perfect”, he added. “The thing with us is that we never take it easy. Even when we have a big lead, as it was in the first set, we keep hustling for every point. We know that one point can change the entire game, so we just want to keep focused all the time.” 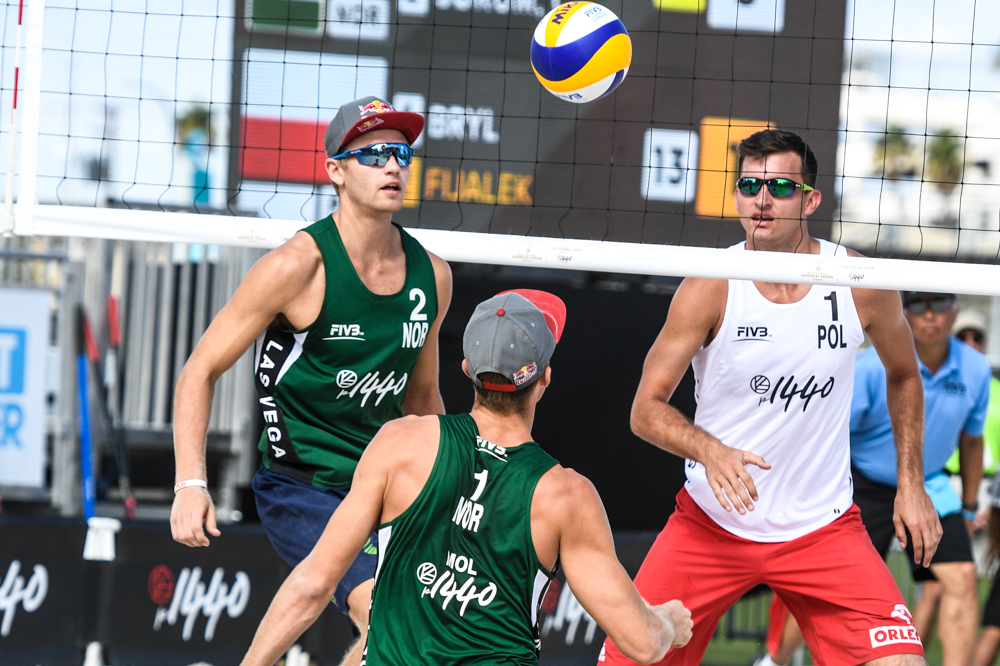 Mol and Sørum compete with Bryl at the net
Russians celebrate promising start
In Las Vegas, Stoyanovskiy and Krasilnikov secured the second medal for their recently-formed team in as many tournaments. After claiming silver last week in Yangzhou, the Russians took bronze in the American resort city.
Stoyanovskiy and Krasilnikov had to avoid as many as five match points from Crabb and Bourne before they closed the match.
“Third sets are always unpredictable and we just wanted to keep our minds fresh and focus on the next point,” Stoyanovskiy said afterwards. “These have been great results for us and they’ve put us already in a good spot for Olympic qualification. We’ll take a month off, rest, and prepare to come back stronger in The Hague in January.”
The next men’s tournament in the World Tour will be the one-star event in Ljubljana, Slovenia, from November 29-Decmeber 2.
Quick links - Beach volleyball:
FIVB Beach Volleyball World Tour - Las Vegas
FIVB.com - Beach volleyball
Latest Videos
Facebook
Twitter
Instagram