Itapema, Brazil, May 19, 2019 – Beach volleyball teams from Europe swept all medals from a FIVB World Tour stop on Brazilian soil for just the second time as Norway’s Anders Mol/Christian Sorum, Poland’s Grzegorz Fijalek/Michal Bryl and the Netherlands’ Christiaan Varenhorst/Steven van de Velde stepped on to the podium of the four-star Itapema Open on Sunday.

Itapema, Brazil, May 19, 2019 – Beach volleyball teams from Europe swept all medals from a FIVB World Tour stop on Brazilian soil for just the second time as Norway’s Anders Mol/Christian Sorum, Poland’s Grzegorz Fijalek/Michal Bryl and the Netherlands’ Christiaan Varenhorst/Steven van de Velde stepped on to the podium of the four-star Itapema Open on Sunday.
Mol and Sorum, the world ranking leaders, secured the highest spot following a 2-0 (21-19, 28-26) victory over Fiajlek and Prudel in the gold medal match. The Dutch finished third at the Meia Praia Beach.
Quick links - Beach volleyball:
FIVB Beach Volleyball World Tour - Itapema
FIVB.com - Beach volleyball
Facebook
Twitter
Instagram
The triumph was a sweet one for the Beach Volley Vikings, who won their first international medal together one year ago in Itapema, when they claimed silver. That result was just the preamble to their amazing run in the summer, in which they captured gold medals in the Gstaad and Vienna Majors, the World Tour Finals and the European Championships.
“This is a very special place for us,” Sorum remarked. “When we first got here last year there were so many people cheering for us that we felt like we were playing in our home court. There were even more people in the stands this year and for us to return here and take gold was fantastic.”
The gold medal match marked the fourth-straight Norwegian triumph over Fijalek and Bryl in international finals, following victories in Vienna, Hamburg and Las Vegas, all in 2018. As the matchup frequently repeats, both teams work to develop new strategies to prevail over each other.
“They are always tough to beat,” Mol added. “Today they played really well and their serves were hard to handle. They targeted me a lot this time and they had success especially in the first set, but we managed to strike back and get some blocking points, which helped us. I want to thank them for another incredible game, it was very fun to play.”
Besides of the four medals won over the Polish, Mol and Sorum also won gold in Gstaad last year. Fijalek and Bryl secured their fourth World Tour medal together, all of them silvers.
Dutch celebrate early first medal 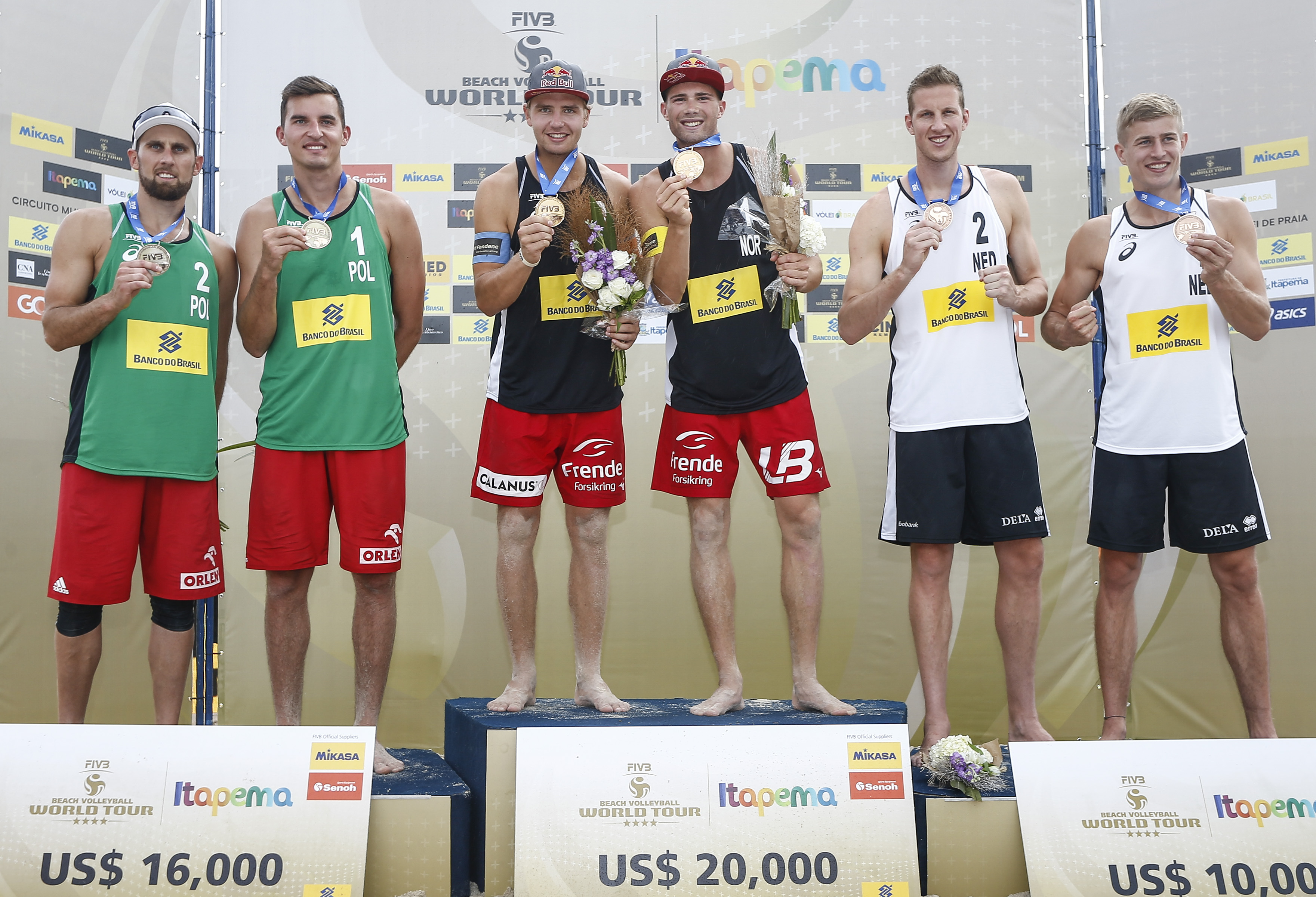 The bronze medal match of the Itapema Open did not happen as Polish defender Bartosz Losiak sustained an ankle injury in the semifinal game and was not able to join his partner Piotr Kantor in the court. With that, Varenhorst and van de Velde secure bronze, their first medal as a team.
The Dutch had just played in two World Tour events prior to Itapema, finishing ninth in Doha and 33rd in Xiamen, and can certainly use the 640 ranking points they earned at the Meia Praia this week.
“It’s unfortunate that Losiak got injured, but it’s a very good result for us,” the 29-year-old Varenhorst said. “These points will be very important for us. We didn’t qualify for the World Championships and that will be a big missed opportunity, so we need to make the most of opportunities like this one. We showed great potential this week and I hope we can keep progressing.”
From Itapema, the World Tour heads to Jinjiang, China, which will host a four-star event, and Boracay, the Philippines, the stage of a one-star tournament.
This website uses cookies to ensure you get the best experience on our website. For more information please read our Cookies Policy.
Ok