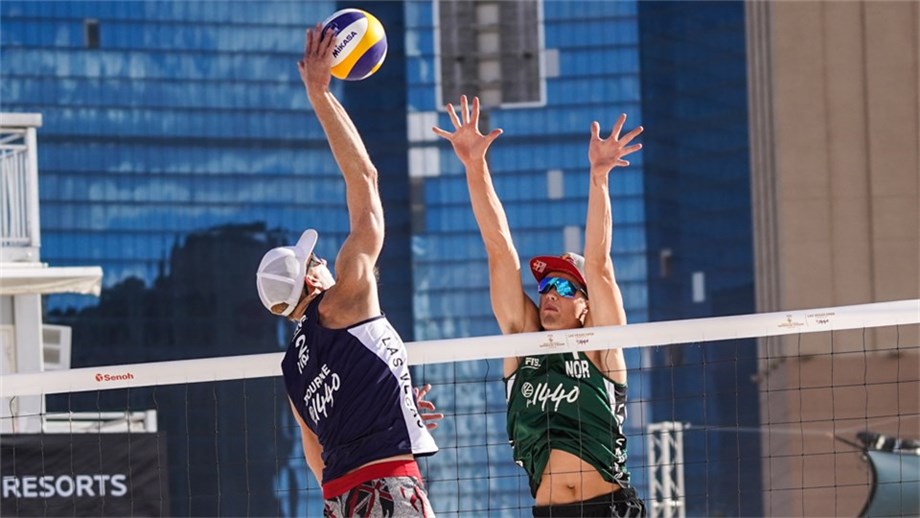 Anders Mol blocks during the semifinal match against the Americans

Las Vegas, USA, October 20, 2018 – Just two months after they met at the final of the FIVB 2018 World Tour Finals in Hamburg, Norway’s Anders Mol and Christian Sørum and Poland’s Grzegorz Fijalek and Michal Bryl are set to compete for another gold medal at the FIVB Las Vegas Open presented by p1440.
The tandems, which also crossed paths in the gold medal match of the Vienna Major earlier in August, will compete for the top spot in the podium at the American resort city while Russia’s Oleg Stoyanovskiy and Viacheslav Krasilnikov and USA’s Tri Bourne and Trevor Crabb will play for the bronze.

Mol and Sørum, who currently sit at the top the world rankings, are still undefeated in the first World Tour event held in Las Vegas as the Beach Volley Vikings have posted five consecutive victories on their way to the gold medal match.
On Saturday, the Europeans avoided elimination in the quarterfinals with a come-from-behind 2-1 (19-21, 21-16, 15-11) victory over Brazilians Ricardo Santos and Alvaro Filho. In the semifinals, they dominated Bourne and Crabb to secure their gold medal match spot with a 21-17, 21-16 win.
“They’re a new team but we had played against them with different partners, so we had a good idea of what their tendencies are,” Mol said about the Americans. “We were also lucky that we did a little training camp with them in California. We knew they were a good team and that they had beaten some great teams to get here, so we prepared for it.”
In the final, the Norwegians just want to keep the good form and hopefully put yet another gold medal around their necks in their last tournament in 2018.
“We’ve been able to keep the same rhythm we had in August and that gives us a lot of confidence to play and it helps because we know what to do”, Sørum added. “The final will be a new game and we cannot take the past matches into consideration. We need to focus on our side and on what we need to do and prepare well.” 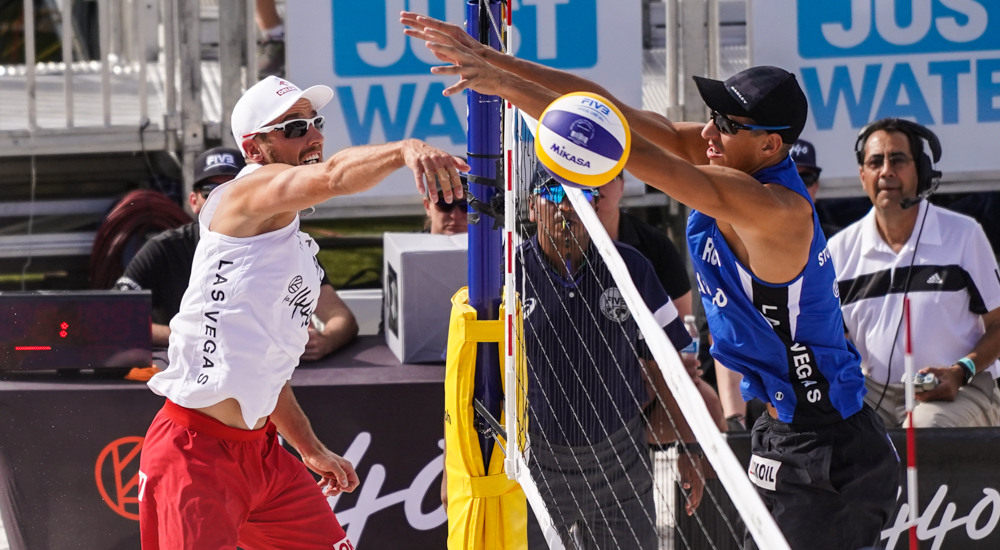 Fijalek spikes past Stoyanovskiy's block in the semifinal
Bryl and Fijalek also reached the final match of their Las Vegas campaign with the perfect record of five-straight victories and just one set dropped. In the quarterfinals, they took down Italian Olympic medalists Daniele Lupo and Paolo Nicolai in two sets (24-22, 21-18).
Later, in the semifinals, they prevailed in a hard-fought battle with Stoyanovskiy and Krasilnikov, taking the win in three sets (21-13, 14-21, 15-11), and secured their third gold medal match appearance in the last four tournaments.
“We’ve been focusing on our side the entire week and it has been working perfectly until now, I hope it remains the same way in the final,” Fijalek explained. “This is the last tournament of the year and even though we know it’s a very important one since Olympic qualification has started, we just want to keep playing with a smile on our faces.”
To Bryl, the gold medal match in Las Vegas is a chance to close the gap against the Norwegians, who have won four of the six matches between the teams.
“It’s great to be in the final again in the first tournament after we took a break following the tournament in Moscow,” Bryl said. “We’ve lost to the Norwegians a couple of times before and we’re happy to have another opportunity in the final. I hope this time things go differently and we can win a gold medal.”
Quick links - Beach volleyball:FIVB Beach Volleyball World Tour - Las VegasFIVB.com - Beach volleyballLatest VideosFacebookTwitterInstagram