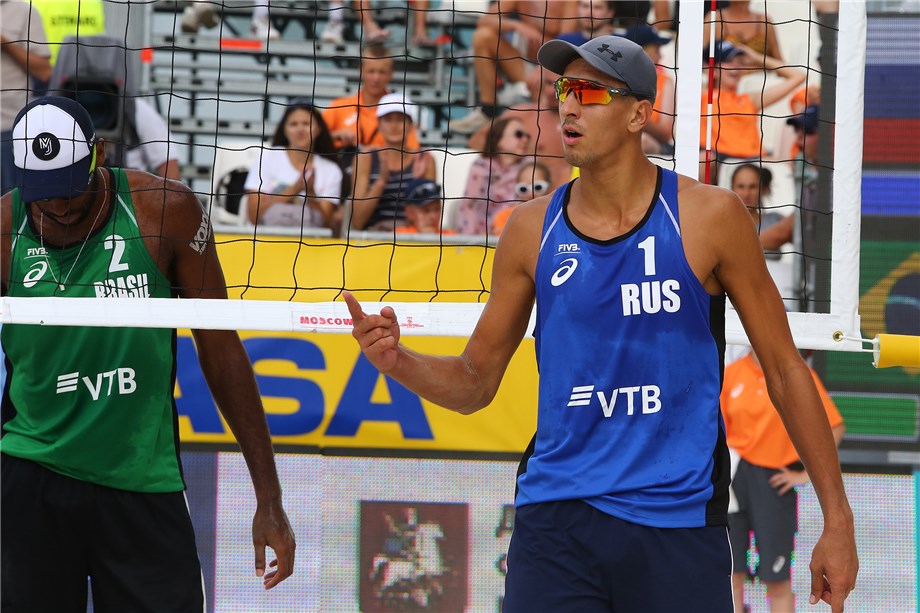 Moscow, Russia, August 13, 2019 – One of FIVB Beach Volleyball World Tour’s iconic venues, Russian capital Moscow, is ready to host yet another four-star stop, a US$ 300,000 double-gender tournament running from August 14 through 18 at the magnificent Luzhniki sports complex. This year Moscow hosts its 14th men’s and 12th women’s World Tour event and it is getting underway just a couple of days after the 2019 CEV European Championship winners were crowned at the same venue.
91 teams (50 women’s and 41 men’s duos) from 28 different countries have signed up for the tournament in Moscow. In each gender a 32-team main draw will feature a modified pool play system with the top three teams in each four-team pool advancing to the single elimination phase. The pool winners will advance directly to the round of 16, while the pool runners-up and the third-placed pairs will play in the round of 24. With 24 duos seeded directly into the main draw, the remaining eight spots will be contested in qualifications to be played on Wednesday, August 14.
With the race for Olympic quota heating up, three Brazilian pairs lead the impressive list of candidates to excel on Moscow sand in the preliminary seeding on entry points. The line-up is headed by Ana Patricia Silva Ramos & Rebecca Cavalcanti Barbosa Silva. This pair have been having a great 2018-2019 World Tour season and have already piled up three gold, two silver and three bronze medals. 21-year-old Ana Patricia is also known as first beach volleyball champion at the Youth Olympic Games (2014) and a two-time U21 world champion (2016 and 2017).
She won these three titles alongside Eduarda Santos Lisboa, who also has three U19 World Championship titles to her name with various partners. Known as Duda, she has been partnering with experienced Agatha Bednarczuk, 2015 world champion and 2016 Olympic silver medallist, since 2017 and their tandem comes second on the Moscow list. Together, they have already collected five gold, three silver and six podium finishes on the Tour, including Moscow second place in 2018 and third in 2017.
Their compatriots Maria Antonelli & Carolina Solberg Salgado follow in third in the preliminary seeding. They finished fifth at their first World Tour event together, Moscow 2017, and have since won one gold, five silver and one bronze medals on the Tour.
The remaining 21 pairs directly seeded into the women’s main draw include three teams from Russia, three from USA, two each from China, Germany, the Netherlands, Switzerland, and one each from Austria, Czechia, Italy, Japan, Latvia, Slovakia and Spain.
Russia’s Viacheslav Krasilnikov & Oleg Stoyanovskiy lead the way on the men’s side. 28-year-old Rio Olympian Krasilnikov and 22-year-old Nanjing Youth Olympic champions Stoyanovskiy teamed up for the start of the 2018-2019 World Tour season and not only have accumulated three gold, one silver and one bronze medals so far together, but snatched the title at the 2019 World Championship. At home in Moscow, Krasilnikov took gold in 2014 and silver in 2017, while Stoyanovskiy claimed bronze in both 2017 and 2018.
The previous world champions, Evandro and Andre, each with his current partner, make up the top three in the men’s preliminary seeding. The Brazilian duo of two-time Moscow silver medallist Evandro Goncalves Oliveira Junior and reigning Olympic champion Bruno Oscar Schmidt come in second. They will be looking for their fourth World Tour medal together, as they have already won a complete set of one gold, one silver and one bronze since they partnered up in March.
Andre Loyola Stein claimed last year’s silver at Moscow, alongside Alison Cerutti, but this year he will battle for Moscow honours together with two-time age-category world champion George Souto Maior Wanderley. The young Brazilians got together in April and this week will be looking for their third World Tour medal together, after the bronze at Jinjiang and the silver at Espinho.
In addition to these three pairs, three more teams from host country Russia, two each from Austria, Italy and USA, and one each from Belgium, Brazil, Canada, Chile, China, Czechia, Germany, Latvia, the Netherlands, Spain, Switzerland and Turkey are set to start their Moscow appearance directly from the men’s main draw.
Quick links - Beach volleyball:
FIVB Beach Volleyball World Tour - Moscow
Facebook
Twitter
Instagram