Murilo back to old habits with new-look Sesi 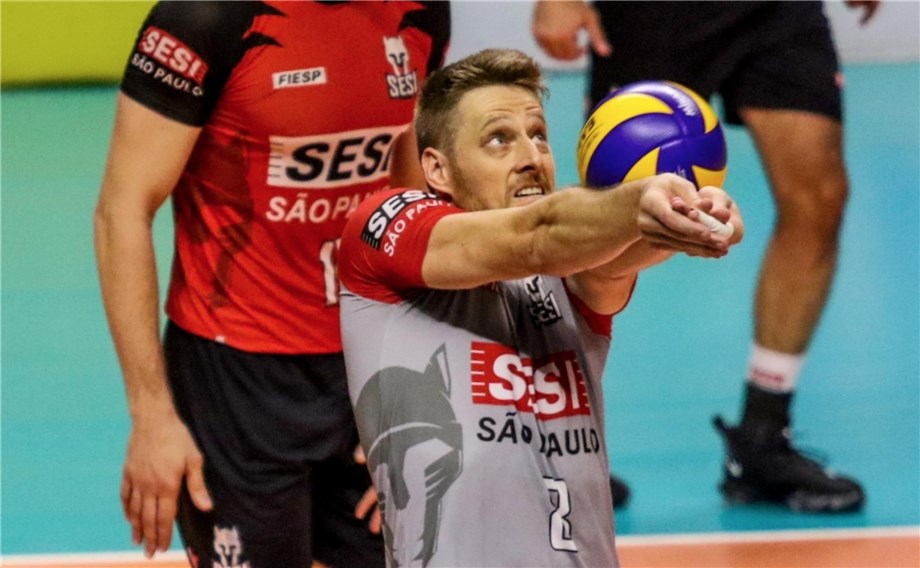 Sao Paulo, Brazil, September 14, 2020 – The recently-started 2020-2021 club season is providing Murilo Endres with a mix of new and old feelings. Leading a revamped and young SESI roster after years sharing the courts with fellow national team members, the 39-year-old Brazilian veteran has found some comfort in returning to this original outside hitter role with the Sao Paulo-based team.

A Brazilian national team member between 2003 and 2018, Murilo has been with SESI since the team first started, back in 2009. Over the first decade, the club had a myriad of Brazilian national team talent on its roster, including setter William Arjona, opposite Alan de Souza and middle-blocker Eder Carbonera, who were all with the team last season.

For this season, however, SESI decided to change their approach, keeping Murilo on as the only star in a young roster that features several players half his age, including his nephew, 20-year-old outside hitter Eric.

The new scenario prompted Murilo, who had been playing as libero since the 2017-2018 season, to bring to reality an old idea and move back to the outside hitter position, a spot in which he received Most Valuable Player awards at both the 2010 FIVB Volleyball World Championships and the 2012 London Olympics.

“I had tried to return to the outside hitter position in the last two seasons,” the veteran revealed. “But when I reported to preseason and took some tests, it was clear that the shoulder and elbow injuries that made me become a libero were still there. This time, probably because I haven’t touched a ball or lifted for four months for the first time in my career, my body managed to recover better and Marcelo (Negrao, the team’s new head coach) asked me if I wanted to try it out.”

Despite the setback, the two-time Olympic silver medallist and world champion was excited about his performance when he left the court.

“It was great, I hadn’t gotten that tired in a while,” he laughed. “I could get a few blocks and that’s something I missed so much. My shoulder is not as strong and as fast as it used to be, but I still managed to score some points on hitting. Serving has been the most difficult thing for me so far because my elbow injury still bothers me a little bit and it shows when I need to serve.”


The match, the first volleyball contest in Brazil since the start of the coronavirus pandemic, was the first step in SESI’s new plan and despite the loss, Murilo is confident about the team’s progress.

“This is a completely new team so we all need to be patient,” he added. “It’s a young team, but there’s a lot of potential, so our first goal is to improve in every match. We’ll use the Paulista Championship as an opportunity to evolve as we head in to the Superliga in the next couple of months.”
More volleyball from Brazil:
Volleyball returns in Brazil with Paulista Championship
Brazil coaches look ahead to 2021 VNL
Jaqueline stays with Osasco for another season
Brazil coach Ze Roberto provides insight on key players for Tokyo Olympics
Olympic champion William to lead Minas talent
Lorenne highlights SESC's new additions
Lucas-Bruno combo ready to go again at Taubate
Tandara returns home for fourth stint with Osasco
Conte stays with Sada Cruzeiro
World Cup MVP Alan back with Sada Cruzeiro
Mauricio Borges joins Taubate's constellation of stars
Quick links:
FIVB.com - Volleyball
Facebook
Twitter
Instagram
Youtube