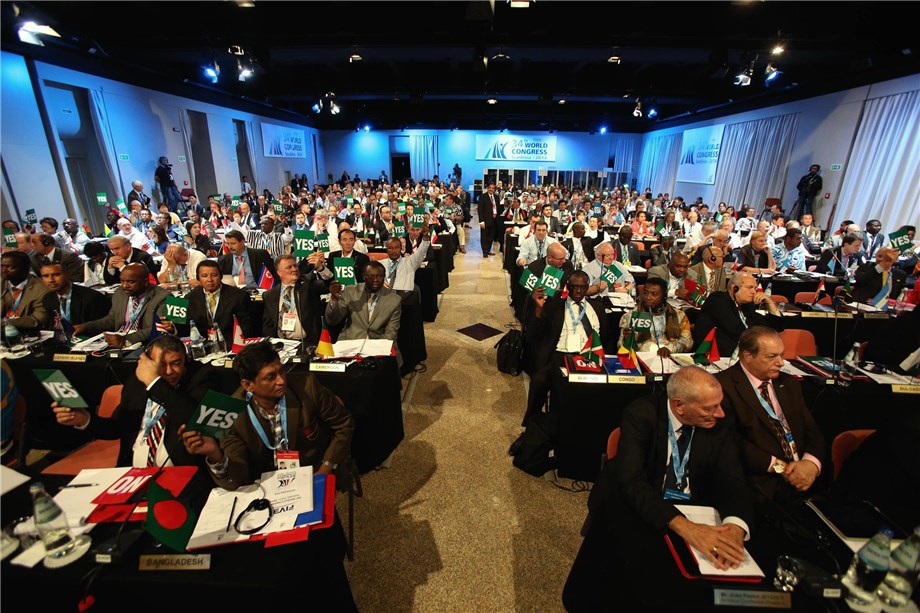 Cagliari, Italy, November 1, 2014 – The FIVB Congress approved a net contact rule and reducing time-outs (for selected events) on the final day of the FIVB World Congress in Cagliari, Italy on Saturday.

With Rules of the Game Commission President Sandy Steel on the podium, the Congress approved a change to Rule 11.3 to apply to both volleyball and beach volleyball so that contact with the net by a player between the antennae, during the action of playing the ball, is now a fault.

The previous rule allowed contact with the net by a player so far as it didn’t interfere with play.

Needing a majority, 111 of the 210 represented federations voted in favour to change the rule.

The Congress also approved reducing by one the number of technical and/or coaches timeouts for FIVB, World and official competitions in the senior category for specific events pursuant to sponsorship, marketing and broadcast agreements.

A full list of approved proposals by the Rules of the Game Commission are below:

Rule 2.2 Structure of the Net
...is made of 10 cm square black mesh.
For FIVB, World and Official Competitions, in conjunction with specific competition regulations, the mesh may be modified to facilitate advertising according to marketing agreements.

Rule 4.1.1
For FIVB, World and Official Competitions, in the senior category, the five staff members on the bench (including the coach) are decided by the coach him/herself, but must be listed on the score sheet. The Medical Doctor and Team Therapist, have to be part of the official delegation, but if not within the five selected, must sit against the delimitation fence, inside the Competition/ Control Area, and may only intervene if invited by the referees to deal with a medical emergency to the players.

The therapist may assist with the warm up until the official protocol.

Rule 6.1.3 (modification approved by the Board)
A completed rally is the sequence of playing actions which results in the award of a point. This includes the award of a PENALTY and loss of service for serving faults out-with the time limit.

Rule 8.3 (in conjunction with challenge system)
Ball “IN”
For the purposes of the Challenge system the ball is “in” if at any moment of its contact with the floor, some part of the ball touches the court, including the boundary lines.

Rule 11.3 (Volleyball and Beach Volleyball)
Contact with the net by a player between the antennae, during the action of playing the ball, is a fault.

Rule 15 (To insert a clause as follows)
For FIVB, World, and official competition, in the senior category, the FIVB may reduce, by one, the number of technical and/or coaches timeouts for specific events pursuant to sponsorship, marketing and broadcast agreements.

Updates to regulations
Rule 4.2.4 (modified)
During set intervals, players may warm up using balls within their own free zone. During the extended interval between sets two and three (if used) players may use their court as well, but only on their side of the net.

Rule 4.5.3 (new)
Compression aids may be worn for protection or support.

7.7.1 (clarification)
A rotational fault...It leads to the following consequences in order:
Team is sanctioned with a point and service to the opponent;
The players’ rotational order must be rectified;
Additionally the scorer should determine the exact moment……all points scored subsequently by the team at fault must be cancelled.