Tokyo, Japan, February 24, 2020 - The Japanese Men’s V1 League started their stepladder playoffs over the February 22-24 weekend with three matches. Were there some upsets or did the higher seeded teams win their matches? Let’s find out.

Tokyo, Japan, February 24, 2020 - The Japanese Men’s V1 League started their stepladder playoffs over the February 22-24 weekend with three matches. Were there some upsets or did the higher seeded teams win their matches? Let’s find out.

In the Game 1 of the V.Final Stage stepladder playoffs, the 5th placed Sakai Blazers faced off against the Suntory Sunbirds. Suntory took a 12-8 lead and maintained that gap throughout the rest of the first set to take 1-0 set lead.

The second set was close throughout, but the Blazers took a 3-1 run at 21-22, to have a set point chance at 24-23. However, a spike by Haruki Ono forced the set to extra points at 24 all. With Suntory’s Dmitriy Muserskiy serving at 26 all, he forced a service receive error that pushed the setter to play a ball outside of the antenna back for a swing by the Blazers Maurice Torres, who spiked it into Tatsuya Shiota’s arms for the Sunbirds stuff block point. 27-26 Suntory. A Sakai offensive net touch gave the second set to Suntory with a 28-26 score and 2-0 set lead.

In the third set, the Blazers knew that their backs were against the wall and that they needed to win the set to stay alive. The Blazers jumped out ahead and had the lead at 14-11, when the 218 cm Muserskiy took a bump set that he could not hit with an overhand pass and found the court just past the Blazers’ three-meter line for the point. The tallest player on the court does did not even swing to get a kill. Suntory 12-14 Sakai. The Blazers were able to shake off that play and keep their lead at 21-18. However, Sakai’s lead was gone after a service error, a Muserskiy spike and a hitting error to tie the set at 21 all. A Muserskiy serving error gave Sakai a chance to win the set at 24-23, but they could not score and once again it was onto extra points. Two Muserskiy spikes gave the Sunbirds the set 26-24 and match 3-0. Muserskiy led all scorers with 26 points (25 spikes and 1 block). 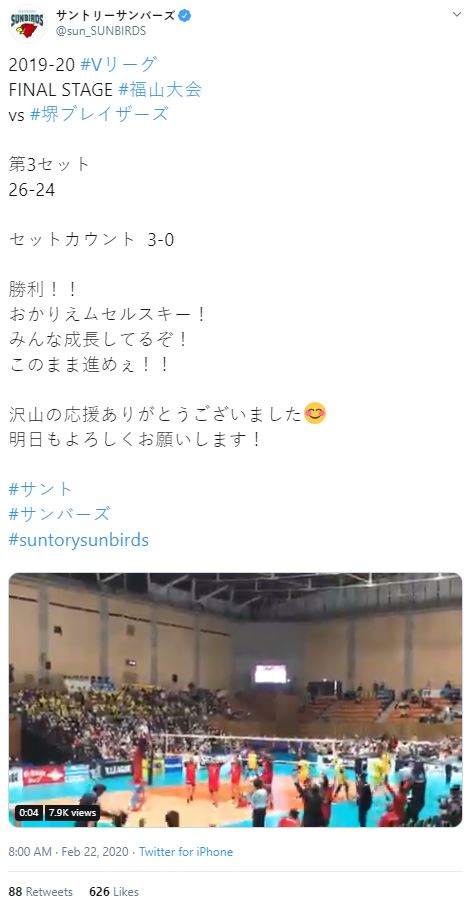 With the Sunbirds’ win in Game 1, they advanced to face the JT Thunders Hiroshima in Game 2. This match would be a battle of the tall opposites, Muserskiy for Suntory and 212 cm Australian Thomas Edgar for the Thunders.

The Thunders got out on the early lead in the first set and pushed it to a seven point lead at 13-6. However, the Sunbirds were able to tie the score at 22-22, and the set went to extra points. A Hiroshima spike and a Muserskiy hitting error gave the Thunders the set 26-24 and a 1-0 set lead.

With the second set, the Sunbirds jumped out to a 4-0 lead and JT called a timeout to try and stop the momentum. It did not work as Suntory kept up the pressure and easily took the set 25-11, tying the match at one set all.

Suntory started the fourth set quickly and built a five-point lead at 10-5 that the Thunders could not bring back and took the set 25-14 and the match 3-1. Muserskiy was dominant in the match with 6 blocks, an ace and 23 spikes for a total of 30 points. Edgar for the Thunders had 19 points (15 spikes, 2 blocks and 2 aces) in a losing effort. 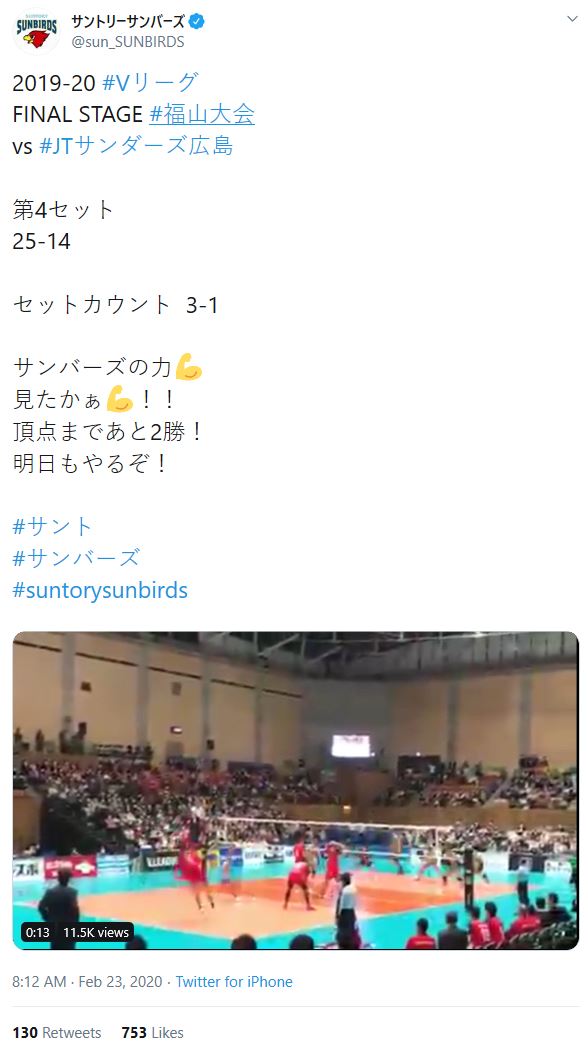 The semifinal match between JTEKT Stings and Suntory Sunbirds would have the leading scorer in the regular season Yuji Nishida for JTEKT and third placed scorer Muserskiy face off with the winner going to the final to face the Panasonic Panthers.

The first set had Suntory get out to an early four-point lead, but the Stings were able to tie the score at 11. From there the Sunbirds went on a big run 9-3 to give them a gap and they would not be caught 25-19. Suntory 1-0.
The second was closer to start, but the Stings got a lead of two-points and kept that gap. A Matey Kaziyski spike for JTEKT ended the set at 25-22, tying the match at one set all.
JTEKT got out early in the third set and kept pushing the lead further. Nishida, a left-handed hitter, situated on the right side of the court ended the set with a cross-court spike just past the three-meter line for a 25-17 score line. 2-1 JTEKT.
In the fourth, Suntory jumped quickly to a 4-0 lead, but could not hold it. From there out the set was very tight, with each team taking a lead in the 20s. A Nishida spike gave JTEKT a match point at 24-23, but Suntory’s block, who had 12 of them in the match, stuffed Nishida’s ball back into him to tie at 24-24. Onto extra points, JTEKT had another chance at match point at 28-27. Muserskiy spiked into a Stings block that landed right on the sideline for the win, 29-27. 3-1 JTEKT. The block was only the third of the match for JTEKT, but it was the most important. Nishida and Muserskiy were tied for the leading scorer with 33 points each. Nishida had 28 spikes and 5 service aces and named man of the match, while Muserskiy had 29 spikes, 2 blocks and 2 aces in the loss. 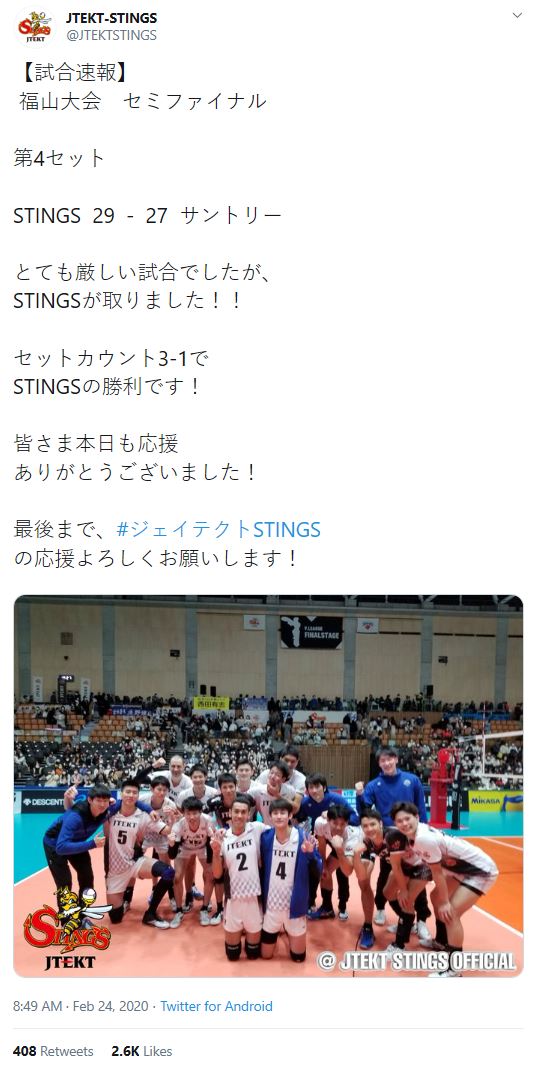