No slowing down for Mol & Sorum in Gstaad 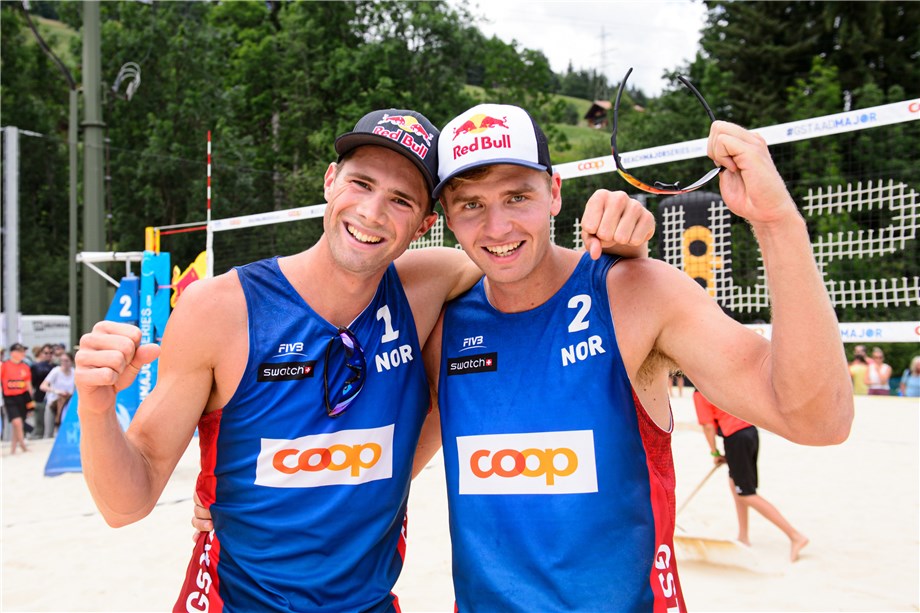 Exhausted, but not slowing down in Gstaad are Anders Mol (left) and Christian Sorum of Norway.

Gstaad, Switzerland, July 12, 2019 - The slogan for this Swiss Alps village is "Come up, slow down!"
But there is no slowing down for Anders Mol and Christian Sorum as the young Norwegians won a pair of FIVB World Tour beach volleyball matches here Friday at the US$600,000 Swatch Major Gstaad to advance to the quarterfinals with pairs from Brazil, Italy and the Netherlands .
Quick links - Beach volleyball:
FIVB Beach Volleyball World Tour - Gstaad
FIVB World Tour - Daegu
FIVB World Tour - Alba Adriatica
FIVB.com - Beach volleyball
Facebook
Twitter
Instagram
Seeded first in the competition as Gstaad celebrates the 20th anniversary of event, Mol and Sorum posted elimination wins Friday over 13th-seeded Taylor Crabb/Jake Gibb of the United States 2-1 (15-21, 21-11, 15-8) in 44 minutes and 26th-seeded qualifiers Saymon Barbosa/Gustavo "Guto" Carvalhaes of Brazil 2-0 (21-14, 21-17) in 44 minutes.
"We love playing here," said Mol, who celebrated his 22nd birthday last week at the FIVB World Championships where he and Sorum placed third. "We won our first World Tour gold medals in Gstaad, so this place is very special for us. I am looking forward to Saturday."
Mol and Sorum have won six more FIVB gold medals since topping the podium in Gstaad last July and the Norwegians have been ranked No. 1 on the World Tour list for 49-straight weeks. Since their Gstaad appearance last year, the Viking pair has won 56 matches with five setbacks to pairs from Brazil, Germany, The Netherlands, Russia and Spain.
One of the setbacks for the Norwegians was to Evandro Goncalves and Bruno Oscar Schmidt of Brazil. And the two teams meet Saturday morning in the Gstaad semifinals for the third time on the World Tour with the previous two matches being for a FIVB gold medal in China and the Czech Republic.
The first was in China May 26 when Mol and Sorum posted a 2-1 (14-21, 21-17, 15-12) win in 50 minutes in Jinjiang. Three weeks later on June 16 in Warsaw, Evandro and Bruno posted a 2-1 (11-21, 21-17, 15-12) win in 52 minutes over the Norwegians in the Polish finale.
“Yes, we will be looking for some revenge,” Mol added.  “But right now, we are exhausted. Thank goodness we had a day off Thursday to prepare for our matches today. The pressure of playing in the World Championships was big as we had a lot of media hype.  It was a great learning experience for us as we have never played in back-to-back major events.”
Saturday’s second semifinal match will feature two teams that shared the Rio 2016 Olympic podium with Bruno as 21st-seeded Alexander Brouwer/Robert Meeuwsen of the Netherlands challenge 12th-seeded Daniele Lupo/Paolo Nicolai of Italy.
Lupo and Nicolai, who dropped the Rio gold medal match to Bruno and Alison Cerutti after the Dutch claimed the Copacabana bronze, have won seven of 13 World Tour meetings with Brouwer and Meeuwsen. On Wednesday this week, the Italians defeated Brouwer and Meeuwsen 2-0 (21-16, 21-19) in a 33-minute Pool E match.