Lausanne, Switzerland, October 16, 2018 – The 2018-19 FIVB Beach Volleyball World Tour will feature a further two tournaments, with Norway and Sweden being added to the list of hosting countries.

Lausanne, Switzerland, October 16, 2018 – The 2018-19 FIVB Beach Volleyball World Tour will feature a further two tournaments, with Norway and Sweden being added to the list of hosting countries.
A men-only 1-Star tournament will take place in Sand in Norway from February 21-24, while Gothenburg will host a double gender 1-Star event from April 18-21. Both will take place indoors.
Quick links - Beach volleyball:
FIVB.com - Beach volleyball
Latest Videos
Facebook
Twitter
Instagram
The tournament in Sand marks the World Tour’s first tournament in Norway since the Stavanger Major in 2015. Stavanger also hosted the Finals of the CEV Beach Volleyball Continental Cup in June 2016
By contrast Sweden will host a World Tour tournament for the first time, though Gothenburg has previously hosted European Volleyball Confederation (CEV) tournaments.
Beach volleyball fans will be able to stay up to date will all the action on the 2018-19 World Tour with the FIVB’s downloadable calendar that is broken up to set out where all the action is taking place from August 2018 to August 2019.
2018/2019 FIVB Beach Volleyball Calendar 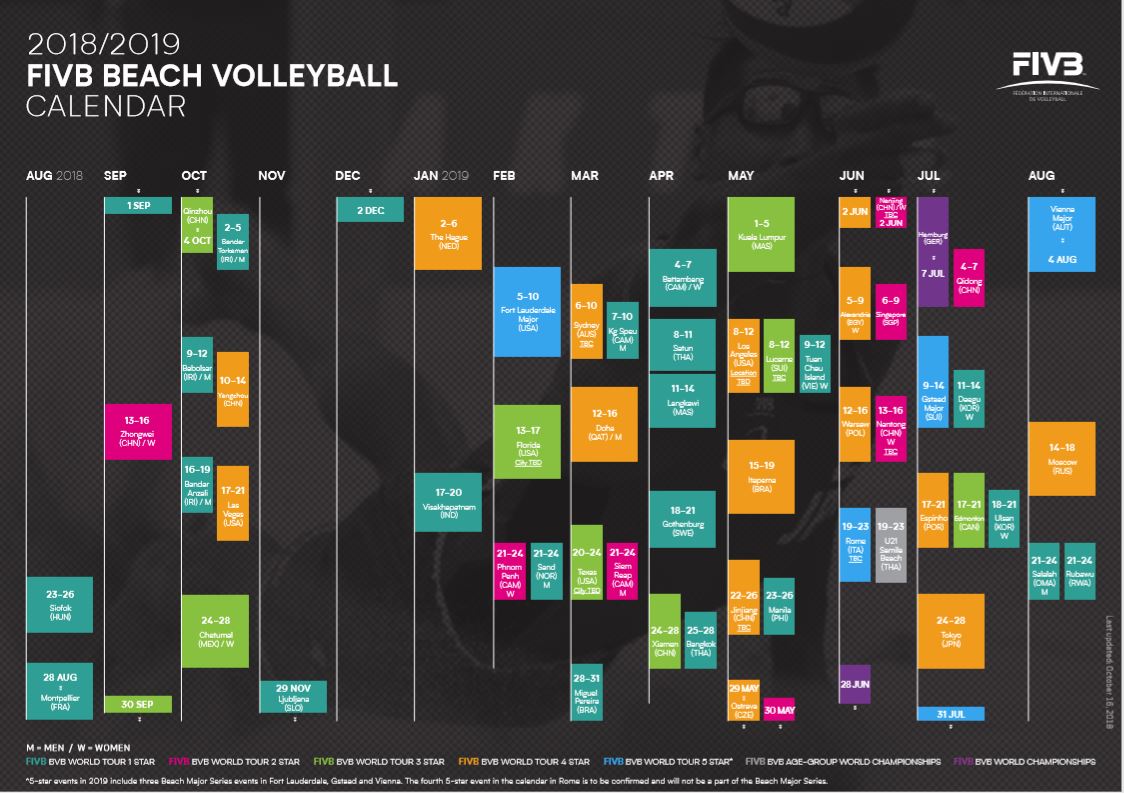 The 2018-19 season began with 1-star tournaments in Siofok, Hungary and Montpellier, France. It continues this week with events in Bandar Anzali, Iran and Las Vegas, USA.
The highlight of the season will be the Hamburg 2019 FIVB Beach Volleyball World Championships from June 28-July 7, while the best of the U21 age-grade will compete at the 2019 FIVB Beach Volleyball U21 World Championships at Samila Beach in Songkhla, Thailand from June 19-23.
The 2018-2019 calendar includes three 5-star Beach Major Series events in Fort Lauderdale (USA), Gstaad (Switzerland) and Vienna, as well as a 5-star event in Rome (TBC). There will also be as many as fourteen 4-star events, seven 3-star events, seven 2-star events, and 21 1-star events across all five continents.
These tournaments are the first steps on the road to qualifying for the Tokyo 2020 Olympic Games. Athletes and fans will be able to enjoy an early taste of what the Olympics will be like when Japan’s capital hosts a 4-Star tournament from July 24-28.