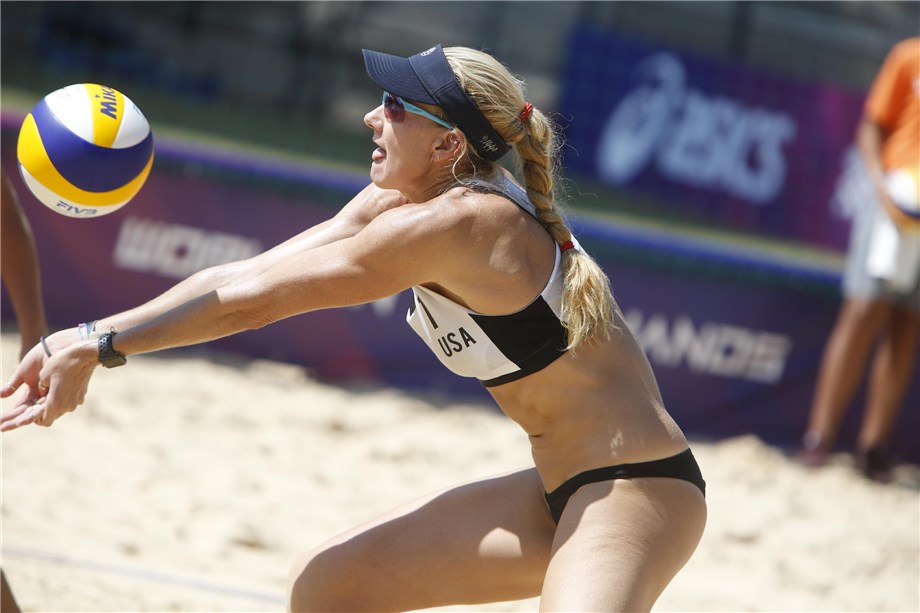 Rome, Italy, September 3, 2019 - With three Olympic medallists in action here Tuesday afternoon at the Foro Italico, two teams from the United States along with a Brazilian pair won country quota matches to advance to the qualifying rounds of the $600,000 FIVB Beach Volleyball World Tour Finals.

Posting women's country quota victories on Tuesday were Americans Brooke Sweat/Kerri Walsh Jennings and Brazilians Fernanda Alves/Barbara Seixas with the men's winners being Billy Allen/Stafford Slick of the United States.
With their wins on Tuesday, the three teams secured berths in Wednesday's qualifiers where eight men's and eight women's teams will gain spots in Thursday's opening main draw pool play rounds at the Foro Italico. Elimination matches will begin on Friday with the quarter- and semifinal contests Saturday and the medal matches Sunday.
The last event on the 2018-2019 international beach volleyball calendar, the winning teams at the FIVB World Tour Finals will claim the $40,000 first-place prizes while capturing 1,200 Olympic qualifying points for the Tokyo 2020 Olympic Games.
Quick links - Beach volleyball:
FIVB Beach Volleyball World Tour Finals - Rome
Facebook
Twitter
Instagram
A three-time Olympic champion and four-time medal winner at the Summer Games, Walsh Jennings and Sweat secured Tuesday's last country quota win with a 2-0 (21-15, 21-10) triumph in 32 minutes over compatriots Emily Day and Betsi Flint. It was Walsh Jennings and Sweat's second country quota win this season over Day and Flint, who had defeated their American rivals last October on home sand in Las Vegas.
“We are determined to have a good finish this week,” said the 41-year-old Walsh Jennings, “so today was a good start because Emily and Betsi are a good team. We had to show up with all we had, and we did it. We took care of the ball, Brooke played great and I think we played great defense. Tomorrow, we got to keep doing things the same way.”
Walsh Jennings added that her team didn’t “mind playing these extra games. “We’re hungry for points. It’s been a great season and now that we’ve made it through to the next round, everything is exciting. There was the bulk of the season that was mentally and emotionally challenging, but physically it has all been good, so it’s been fun. This is a great opportunity and that’s how we’re looking at every match.” 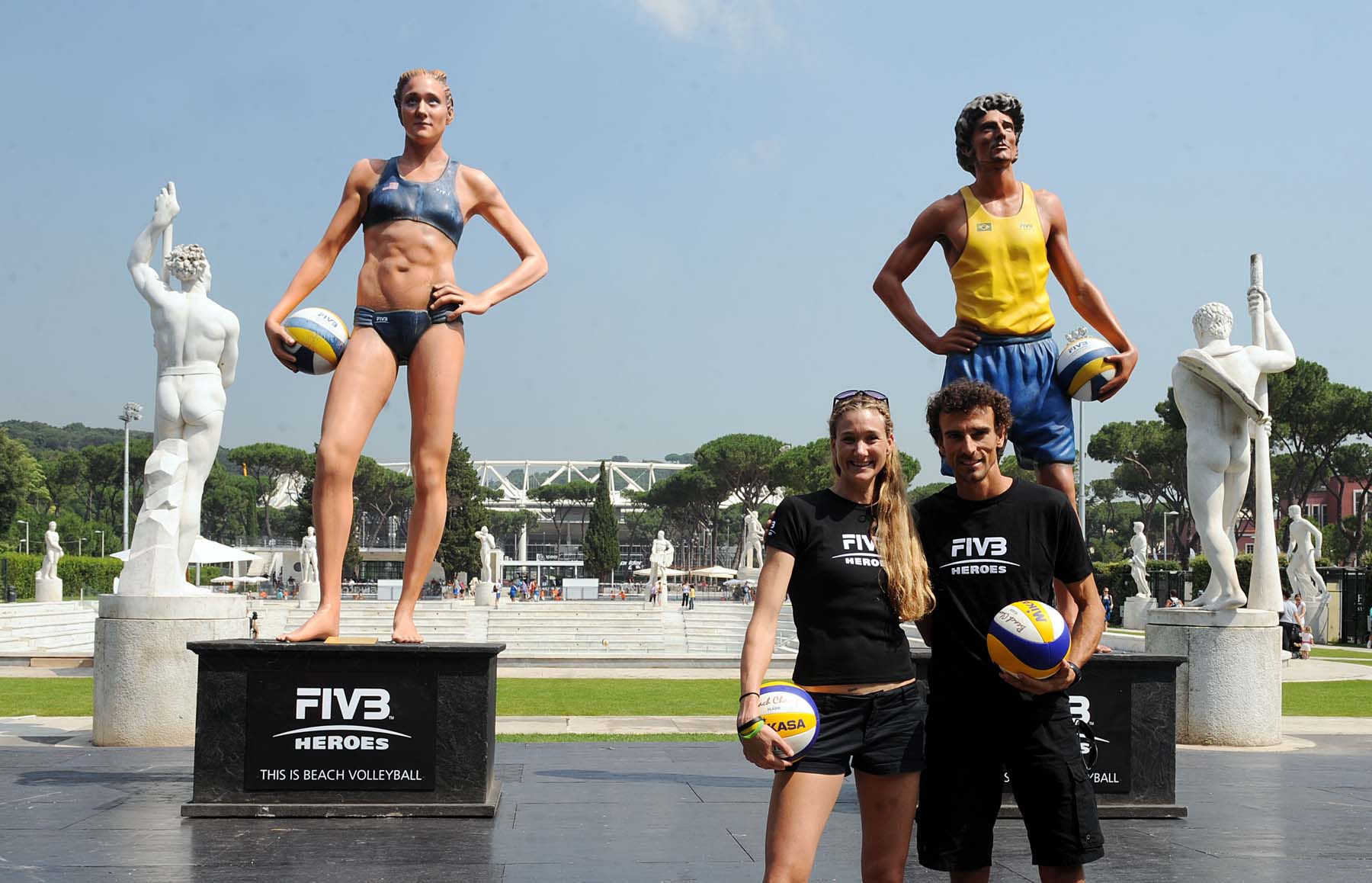 Kerri Walsh Jennings (left) in 2011 at the Foro Italico with legendary Brazilian Emanuel Rego and their statues
Barbara, who captured a silver medal at the Rio 2016 Olympic Games with Agatha Bednarczuk, and Fernanda eliminated compatriots Talita Antunes/Taiana Lima 2-1 (16-21, 21-11, 15-11) in 48 minutes. It was the second FIVB World Tour match between the two teams this season with Talita and Taiana defeating Barbara and Fernanda in April at the Xiamen Open in China.
Talita, who placed fourth, ninth and fourth at three Olympic appearances with different partners, and Taiana were the last women's team to win a gold medal at the Foro Italico as the pair topped the 2013 podium at the Rome Grand Slam. Talita and Taiana also entered Tuesday's action after placing fourth and second in their last two FIVB World Tour events Austria (Vienna) and Russia (Moscow), respectively.
“They’re a great team and just played in the finals in Moscow," said Fernanda after her win with Barbara over Talita and Taiana. "It was a nerve-wrecking match for both teams and I think that the most important thing was to keep our minds strong and find a good balance between pushing hard and remaining focused, especially after losing the first set.  When things aren’t going your way it’s easy to let your emotions take control as you try to find a way to turn things around, but we did a good job in remaining steady.” 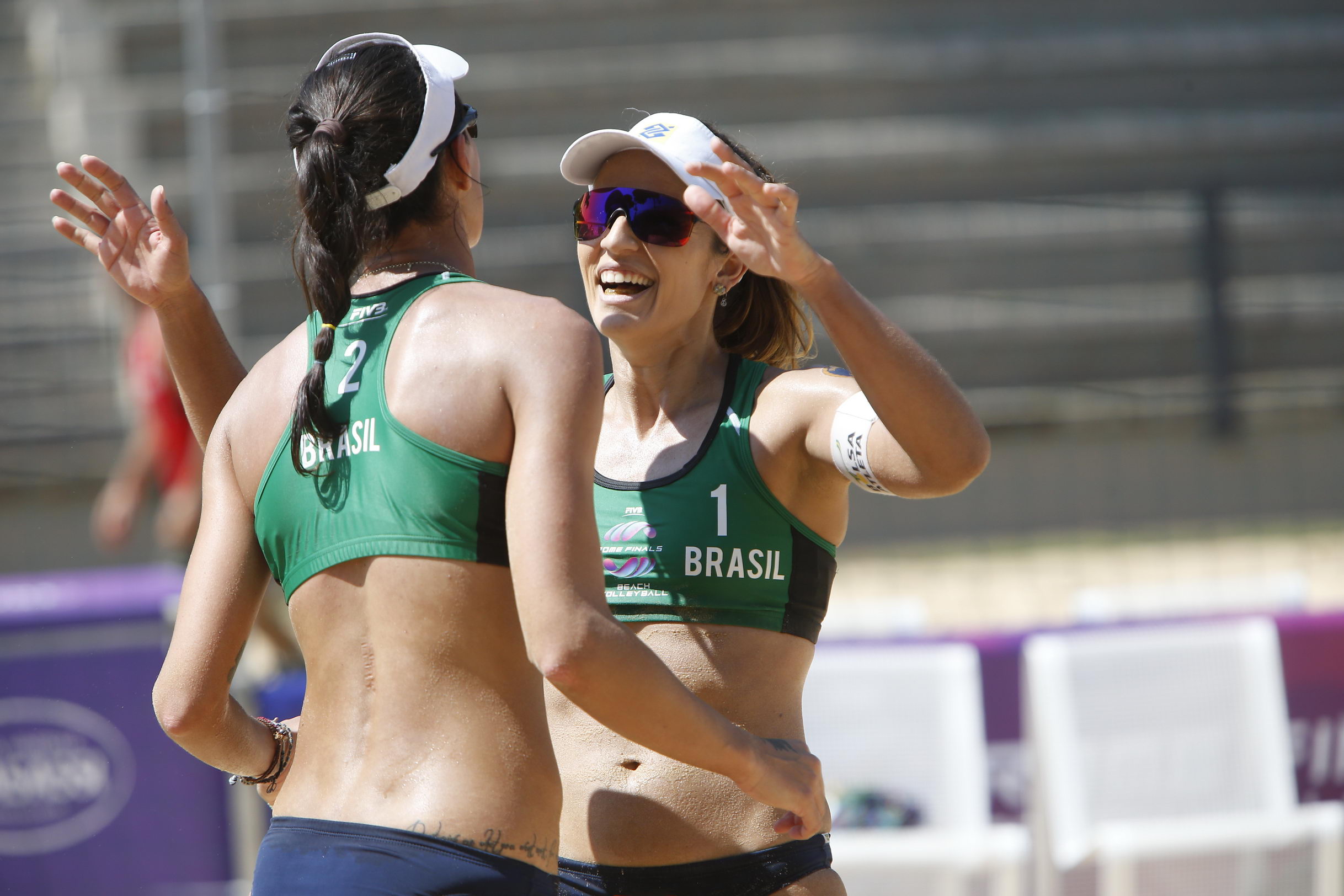 Success Tuesday for Fernanda and Barbara (right)
Fernanda added that "this season has been a weird one for Barbara and me. At the same time, I feel like we’ve played good matches and improved a lot as a team, our results somehow don’t show it. It’s frustrating because this is the season in which I felt the most comfortable with Barbara and I really like our level, but we just didn’t get the results. Hopefully we have a chance to end the season on a high here this week.”
Reid Priddy, who captured indoor Olympic gold (Beijing 2008) and bronze (Rio 2016) for the United States, failed in his bid to advance to Wednesday's qualifier with Theo Brunner after the pair dropped a 2-1 (16-21, 23-21, 15-13) decision in 50 minutes over American rivals Billy Allen/Stafford Slick. Earlier this season in Australia, Priddy and Brunner defeated Allen and Slick in a three-set match in Sydney.
“They had us on the first set," said Allen. "They played well, and we couldn’t really stop them. They served me the whole time and I had to just find a way to sideout. Stafford stuck with me and set me great and we capitalized on those one or two opportunities we had. We weren’t stopping them at all but then Stafford stepped up his serving a little bit and got a couple of good serves down their line. That kind of catapulted us back into the game.”
Allen said his team was "happy to be in the qualifier, but there’s still a lot of work to do. It’s the last tournament of the season and it’s just the second five-star in which we have a chance to play in the main draw. We’re hoping to take advantage of it because it’s really important for points.”