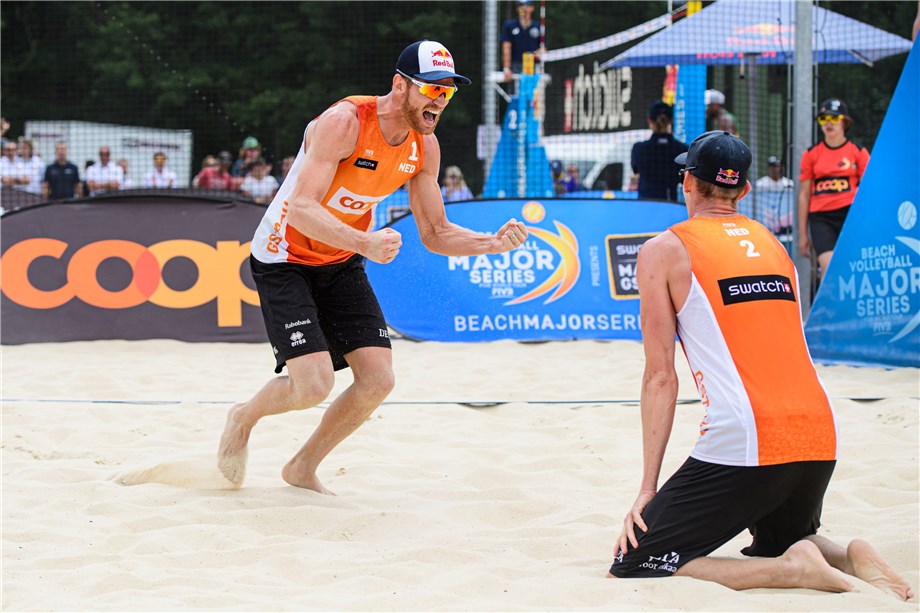 Gstaad, Switzerland, July 13, 2019 - It will be two young Norwegians against six players with Olympic and world championship credentials here Saturday in the men's final four matches at the US$600,000 Swatch Major Gstaad.
Quick links - Beach volleyball:
FIVB Beach Volleyball World Tour - Gstaad, Switzerland
FIVB.com - Beach volleyball
Facebook
Twitter
Instagram
Saturday's eight-match schedule will all be played on the Swiss Alps village's centre court starting at 9:35 a.m. (local time) with the first of two women's quarterfinal contests.  The first men's semifinal begins at 1:05 p.m.
Following two more women's Round of 8 matches at 3 and 4 p.m., the men's medal matches will be played at 5:20 and 6:35 p.m. with the winning team sharing the $40,000 first-place prize along with collecting 1,200 Olympic qualifying points for the Tokyo 2020 Summer Games.

The first men's semifinal features 12th-seeded Daniele Lupo/Paolo Nicolai of Italy and 21st-seeded Alexander Brouwer/Robert Meeuwsen of the Netherlands. The second pits top-seeded and defending Swatch Major Gstaad champions Anders Mol and Christian Sorum of Norway against sixth-seeded Evandro Goncalves/Bruno Oscar Schmidt of Brazil.
Despite their youth, the 22-year old Mol and the 23-year old Sorum of Norway have proven themselves on the international beach volleyball circuit with seven gold medals and nine podium placements in their last 11 FIVB  appearances that started her last July with a podium-topping performance in Gstaad.
The 32-year old Bruno captured the Rio Olympic gold medal with Alison Cerutti by defeating the 28-year old Lupo and 30-year old Nicolai in the Copacabana finale.  Bruno and Alison also teamed to win the 2015 world championships in the Netherlands.
The 29-year old Brouwer and 31-year old Meeuwsen were crowned the 2013 FIVB world champions in Poland before collecting the bronze medal at the Rio Olympics where the Dutch lost in the semifinals to Bruno and Alison.
The 28-year old Evandro, who placed ninth at the Rio Olympics with Pedro Solberg, captured the 2017 FIVB world championships trophy in Vienna with Andre Loyola.
The Dutch-Italian match will feature two teams with a combined 167 World Tour appearances.  Lupo and Nicolai have won seven of 13 matches with Brouwer and Meeuwsen on the international circuit with the first contest being in 2011 and the last here Wednesday in pool play.
The Brazilians and Norwegians have met twice on the World Tour with both being this season in the gold medal match. Mol and Sorum defeated the Brazilians May 26 in the Chinese finale in Jinjiang with Bruno and Evandro avenging the setback three weeks later in the Polish Open at Warsaw.
In the women's quarterfinals, defending Gstaad champions and newly-crowned world champions Melissa Humana-Paredes and Sarah Pavan have advanced to the Round of 8 where the second-seeded Canadians meeting fifth-seeded Ana Patricia Silva/Rebecca Cavalcanti of Brazil. Humana-Paredes and Pavan have defeated the young Brazilians twice last year in Portugal and the United States. 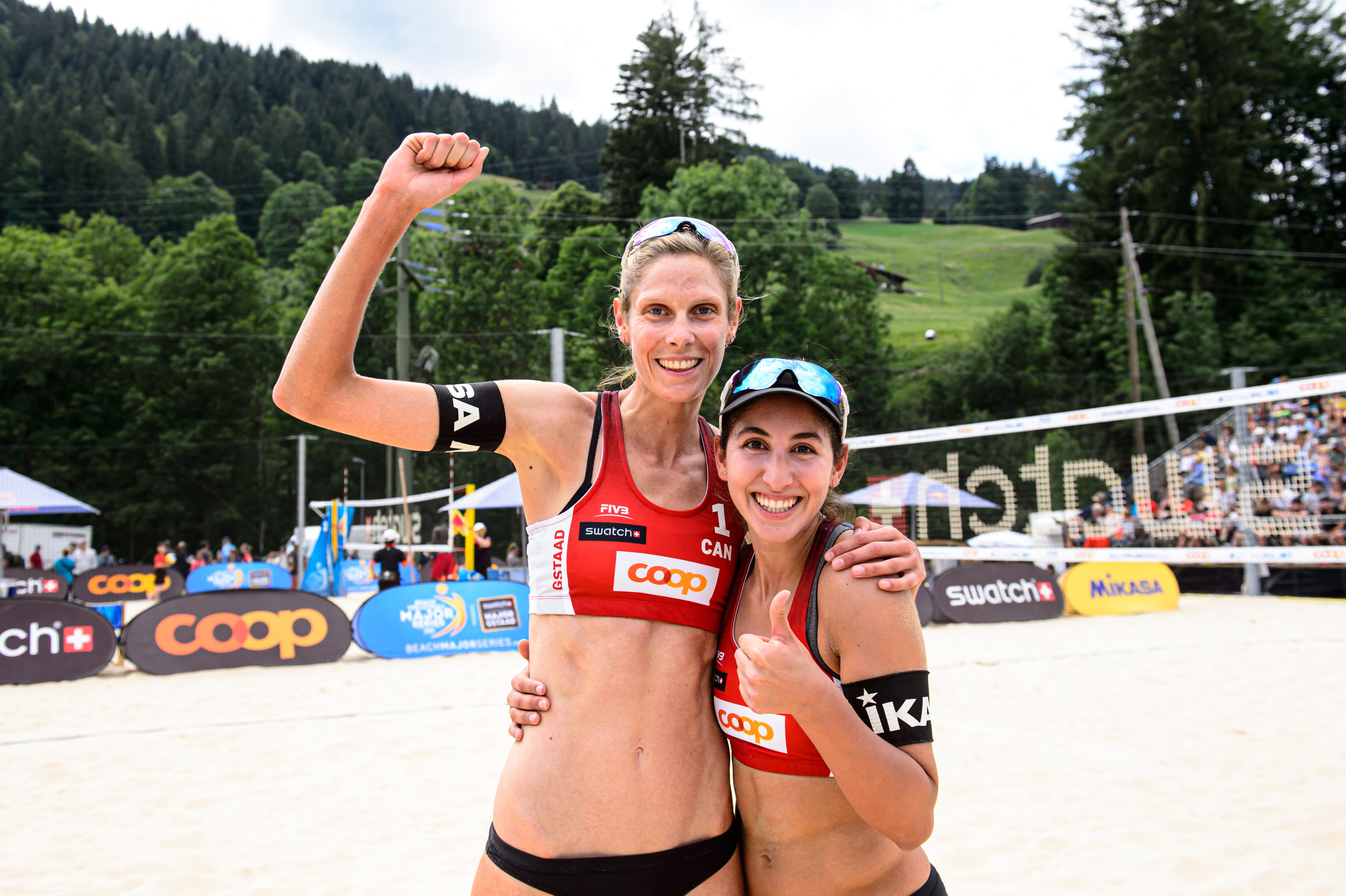 Canadian world champions Sarah Pavan (left) and Melissa Humana-Paredes
Prior to the men's semi-finals, seventh-seeded Brooke Sweat/Kerri Walsh Jennings meet third-seeded Alix Klineman/April Ross in an All-American quarterfinal matches.  The second contest pits ninth-seeded and European champions Sanne Keizer/Madelein Meppelink of the Netherlands against 15th-seeded qualifiers Maria Antonelli/Carolina Salgado of Brazil.
The two American teams have meet once this  in a May 30 pool play match in the Czech Republic with Klineman and Ross.  Antonelli and Carolina have a 3-2 edge in the series with the Dutch and Keizer and Meppelink won the last match June 1 in Ostrava.
Saturday's last women's quarterfinal match will be the best for the local fans as top-seeded Nina Betschart/Tanja Huberli of Switzerland meets 18th-seeded Natalia Dubovcova/Andrea Strbova of the Slovak Republic.  The two teams met for the first-time last week at the World Championships where Betschart and Huberli eliminated the Slovakians enroute to a fourth-place finish in Hamburg. 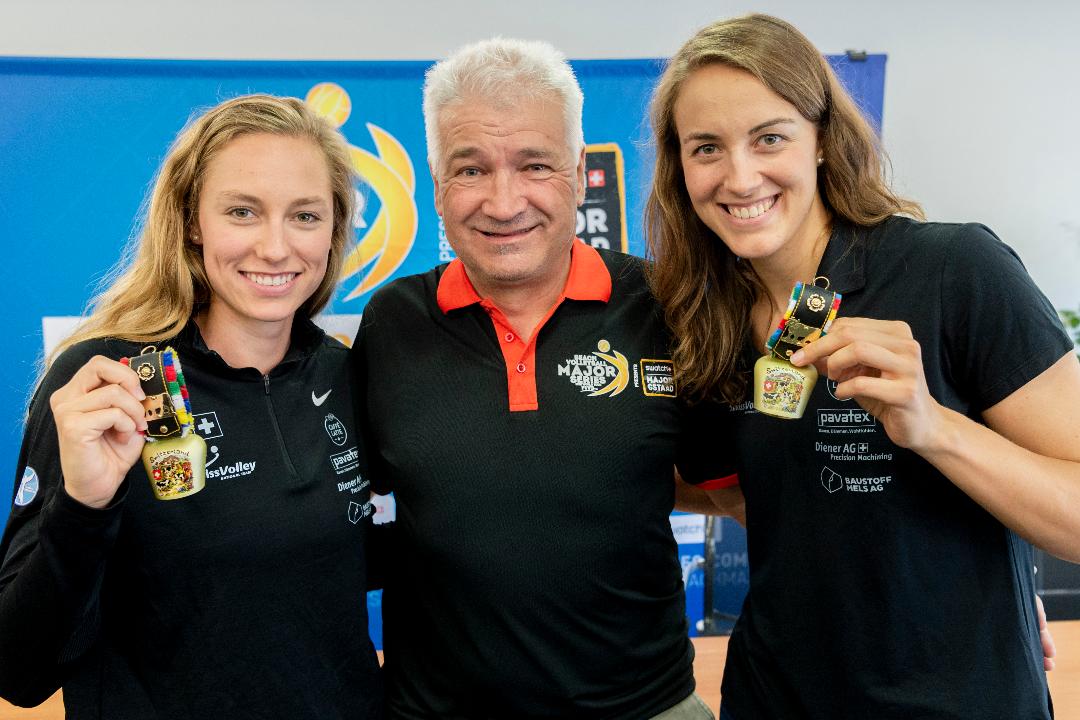