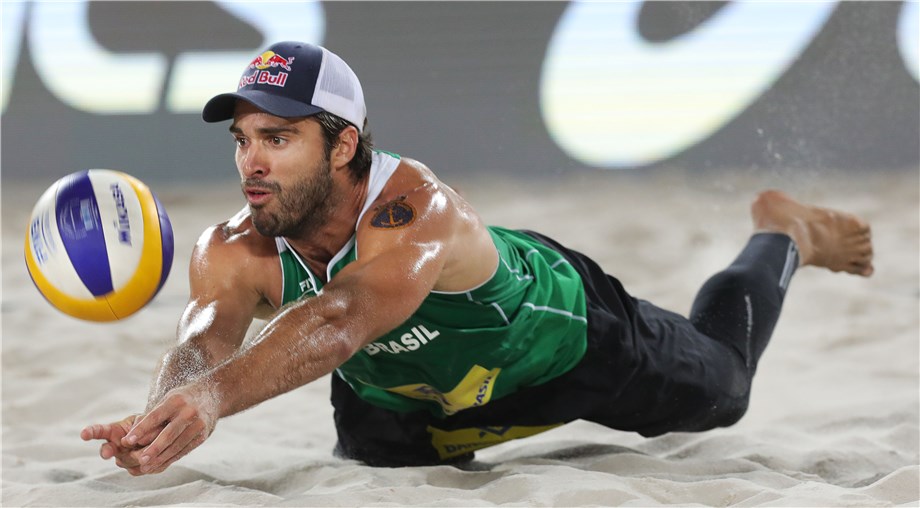 All eyes for 2016 Olympic champion Bruno Oscar Schmidt of Brazil are focused on Tokyo 2020!

Tokyo, Japan, July 25, 2019 - While the celebration Wednesday marked one-year until the opening ceremonies for the 2020 Olympics, the action here Thursday at Shiokaze Park features newly-crowned women's world champions Melissa Humana-Paredes and Sarah Pavan of Canada. There is also a focus on Brazilians Alison Cerutti and Bruno Oscar Schmidt, the men's gold medal winners at the Rio 2016 Olympic Games.
Although the two Brazilians are not competing together in their bid to return to Olympic glory in Tokyo, Alison and Bruno are two of the six players competing this week that secured medals at the 2016 Copacabana Summer Games.
"Obviously, it is different this time in our bid for another Olympic berth with new partners," said the 32-year Bruno, who is now playing with Evandro Goncalves while Alison has paired with Alvaro Filho.  "While I relished in Alison and I's accomplishments in 2015 as world champions and 2016 as Olympic gold winners, I am focused now on Tokyo 2020 with Evandro."
In addition to Alison and Bruno, other players competing in the 2019 Tokyo Open with medals from the Rio 2016 Olympic Games are the Dutch pair of Alexander Brouwer and Robert Meeuwsen and Americans April Ross and Kerri Walsh Jennings.
Brouwer and Meeuwsen, who are nearing the end of their ninth FIVB World Tour season together, captured the bronze medal at the Rio 2016 Olympics after losing in the semi-finals to Alison and Bruno.  The Dutch pair will start competing in Pool D Thursday with teams from Canada, Japan and Poland. 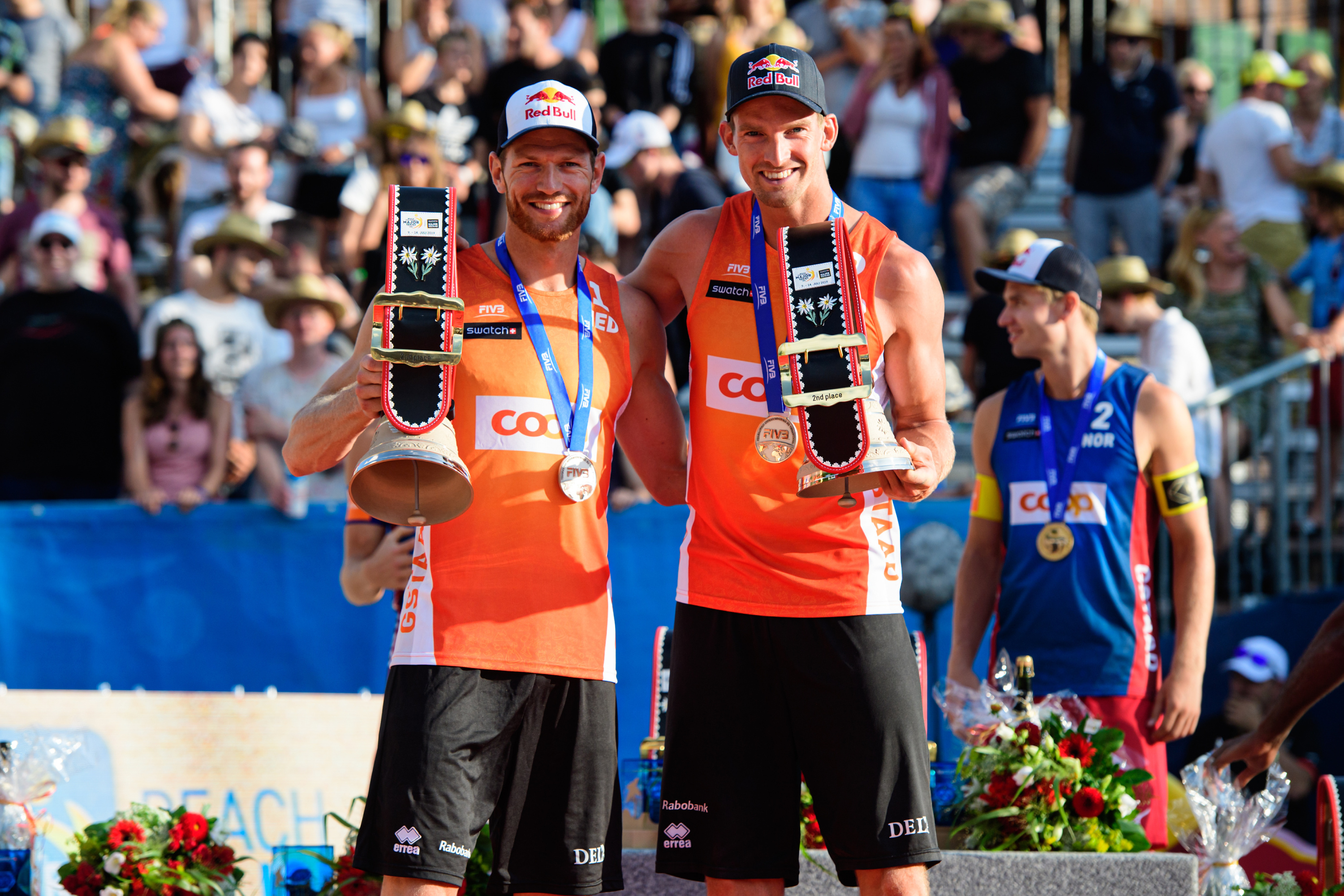 Dutchmen Alexander Brouwer (left) and Robert Meeuwsen
After winning Olympic bronze together in 2016, Ross and Walsh Jennings split the next season and are now competing in the 2019 Tokyo Open with Alix Klineman and Brooke Sweat, respectively.  Ross and Klineman are playing in Pool A this week with pairs from Canada, Germany and Japan with Walsh Jennings and Sweat are competing in Pool F with tandems from France, Germany and Japan.
Ross and Klineman are currently the No. 1-ranked women's team on the World Tour after finishing second to Humana-Paredes and Pavan in the 2019 FIVB World Championships at the start of July in Hamburg, Germany, followed by a gold medal placement at the Gstaad Major two weeks ago in Switzerland.
Walsh Jennings and Sweat are the listed third among American teams on the world rankings at No. 13 and have already satisfied the Olympic requirement of competing in 12 events to qualify for consideration for the Tokyo 2020 Summer Games. 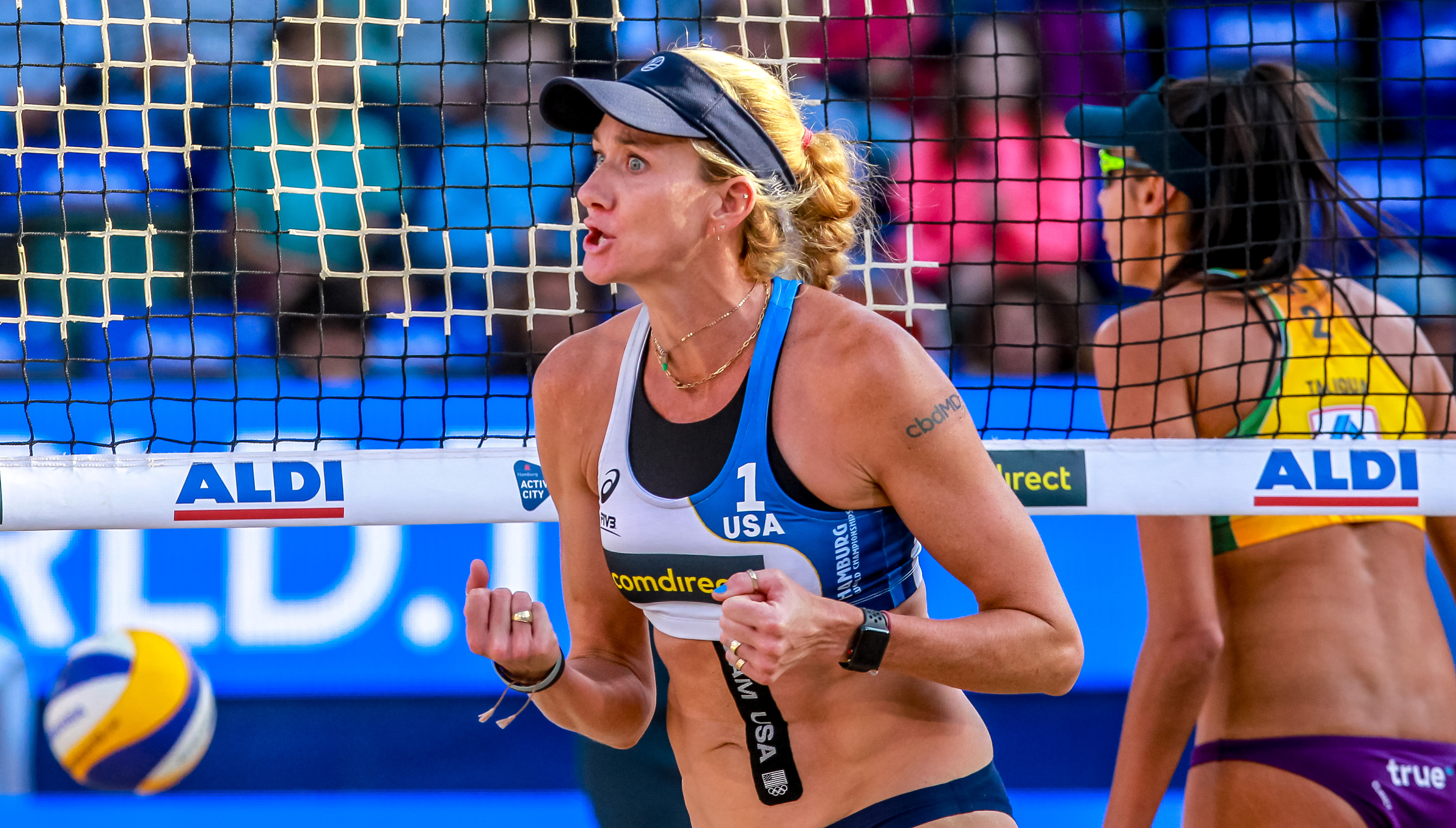 Four-time Olympic medal winner Kerri Walsh Jennings of the United States
While the Tokyo 2020 Olympic schedule will have teams usually playing one match a day with a day off in between, the 2019 Tokyo Open schedule will be held at a lightning pace with beach volleyball tandems playing two or three matches a day leading to Sunday's medal matches where the winning pairs will net the $20,000 first-place prizes.