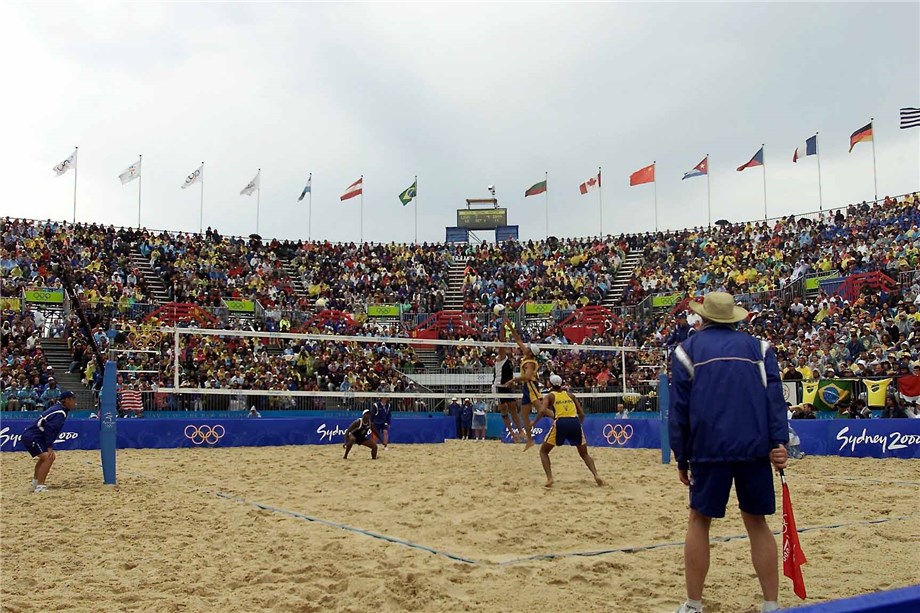 Lausanne, Switzerland, April 14, 2016 – With only weeks to go before the 2000 Olympic Games, Dain Blanton and Eric Fonoimoana seemed unlikely to be taking part in the second-ever Olympic beach volleyball competition. Then, as now, a maximum of two pairs per country could qualify through the Swatch World Tour standings, and Blanton and Fonoimoana were the third American cab on the rank. But a shoulder injury to Karch Kiraly suddenly opened the door to them.

Kiraly’s partner, Adam Johnson, could still qualify in the second US spot with a new partner – unless Blanton and Fonoimoana reached the semifinals of the last Tour event before the Games. Up against world No1 pairing Emanuel Rego and Jose Loiola of Brazil in the quarterfinals this seemed unlikely, but somehow Blanton and Fonoimoana got through.

Once they hit Sydney’s Bondi Beach they were inspired. Despite only being seeded ninth for the Olympic tournament they went all the way through to the final, where they beat another Brazilian pair, Ze Marco and Ricardo 2-0 (12-11, 12-9), whom they had never previously beaten in four attempts. To add to the surprises in the men’s event, Germany’s Jorg Ahmann and Axel Hager, seeded 16th, took bronze.

The women’s competition came down to a shoot-out between the Brazilian pair Adriana Behar and Shelda Bede and the home favourites Natalie Cook and Kerri Pottharst, who had won the bronze medal four years earlier in Atlanta. In the semifinals Cook and Pottharst had defeated the other Brazilian team of Sandra Pires and Adriana Samuel, respectively gold and silver medallists from Atlanta.

But facing Adriana Behar and Shelda in the final they were behind early on before coming back to win the first set. The second set followed a similar pattern as the Brazilians raced into an early lead, but in front of their own supporters the Australians could not be denied, winning 2-0 (12-11, 12-10).

The resounding success of the tournament as a whole was recorded for posterity in the Official Olympic Report for Sydney 2000, which noted: “The beach volleyball competition, on the sands of iconic Bondi Beach, seemed to replicate the magic of the host city itself during the Games – warm, brash, friendly and unrestrained.

“The venue started as one of the most controversial of the Games, due to local objections to its construction on Australia's most famous beach. Yet it ended the programme celebrated as one of the best. Almost 170,000 spectators packed the two daily sessions at the stadium, guaranteeing beach volleyball's Olympic future.”

This article is one of a series in the run-up to the Rio 2016 Olympic Games as the FIVB looks back at previous Olympic volleyball  and beach volleyball tournaments.