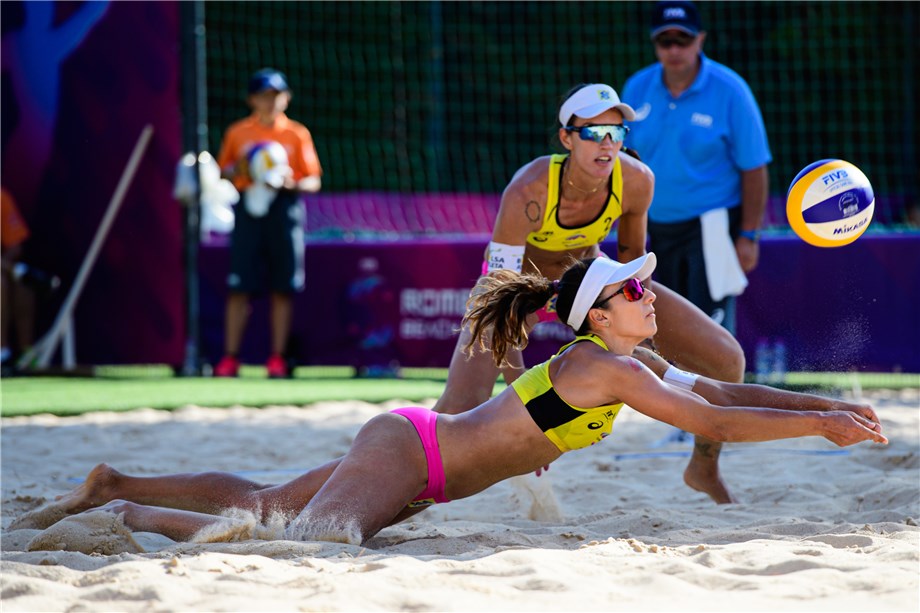 Barbara Seixas dives for Mikasa as partner Fernanda Alves follows the action as the Brazilians are 2-0 at the FIVB World Tour Finals with a country quota win Tuesday and a qualification tournament triumph Wednesday at the Foro Italico.

Rome, Italy, September 4, 2019 - For the second consecutive day, Olympic medal winners Barbara Seixas of Brazil and Kerri Walsh Jennings of the United States posted wins during the preliminary rounds of the FIVB Beach Volleyball World Tour Finals to propel their teams into the main draw of the $600,000 event. 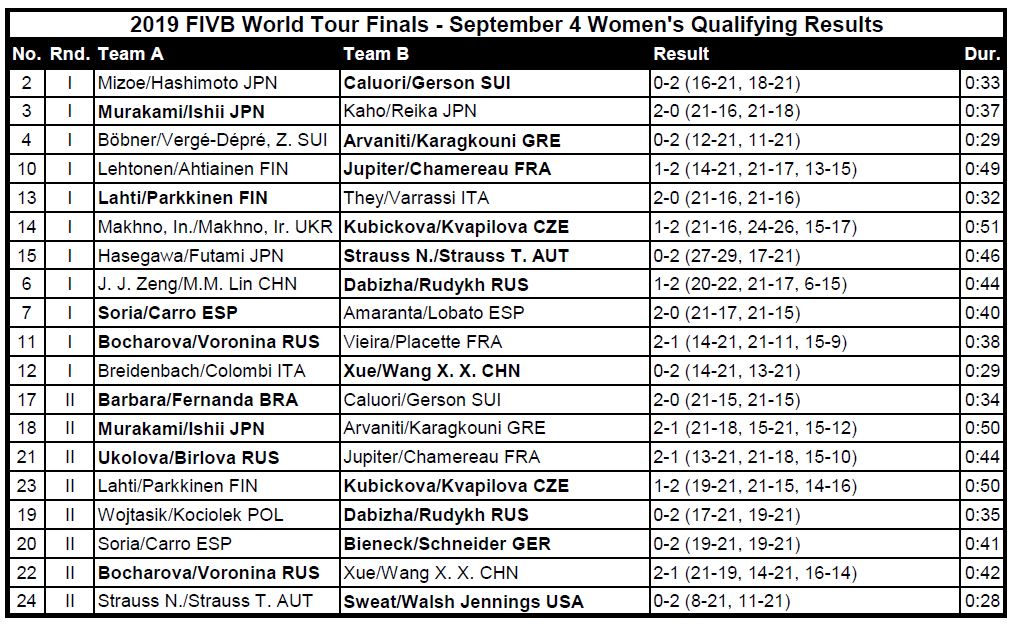 Barbara, who captured the silver medal at the Rio 2016 Olympic Games with Agatha Bednarczuk, and her top-seeded partner Fernanda Alves gained a spot in Thursday's opening pool play rounds with a 2-0 (21-15, 21-15) victory in 34 minutes over 16th-seeded qualifiers Laura Caluori/Dunja Gerson of Switzerland.
A four-time Olympic medal winner with three podium-topping finishes with Misty May-Treanor at the Athens 2004, Beijing 2008 and London 2012 Summer Games, Walsh Jennings and her second-seeded teammate Brooke Sweat advanced to the main draw rounds with a 2-0 (21-8,  21-11) win in 28 minutes over the 15th-seeded Strauss sisters (Nadine and Teressa) of Austria.
Quick links - Beach volleyball:
FIVB Beach Volleyball World Tour Finals - Rome
Facebook
Twitter
Instagram
“We came from a tough country quota match and I think we responded pretty well,” said the 32-year-old Barbara as she and Fernanda defeated compatriots Talita Antunes and Taiana Lima in a three-set country quota match Tuesday. Talita and Taiana also won the last FIVB World Tour stop in Rome at a 2013 event on the Foro Italico sand.
“We knew it wouldn’t be easy against the Swiss, they’ve been playing in World Tour qualifiers for a while now and they’re very smart on the way they play.” Added Barbara. “We knew we had to impose our game and play with determination and I’m proud of what we did today.”
As for the 2018-2019 season, Barbara said “this wasn’t great for us and that’s just how sports are. We gave all we had this season; I feel like we played some great matches but sometimes things didn’t just go our way. We did all we could, but we didn’t get the results we expected and that’s always difficult to handle. But this is a big tournament and hopefully we can play a little more relaxed and get the result we’ve been looking for all season.”
For Walsh Jennings, she said “I really love this event. It’s been years since I’ve been back in Rome and everywhere I look is inspiring. The sand is beautiful, the venue is beautiful, Brooke is playing like a champion so it’s a start. Obviously, we had to win two matches to get into the tournament and we’re right where we want to be, and we’re excited to start tomorrow.”
With Walsh Jennings being “so happy”, Sweat said “this is a big tournament for us, I know the importance of it and it was just a small sacrifice to make to do as well as we want to do here. We wanted to start strong, get here early, get acclimated and I think we did that. It showed in our first two matches.”
Joining the Americans and Brazilians in qualifying for Thursday’s main draw schedule were three pairs from Russia along with teams from the Czech Republic, Germany and Japan.
Third-seeded Ekaterina Birlova/Evgeniya Ukolova, who captured their country’s national championships two weeks ago, paced the Russia effort Wednesday along with seed-break-through advancements for 11th-seeded Mariia Bocharova/Maria Voronina and 12th-seeded Ksenia Dabizha/Daria Rudykh.
“Not qualifying in Vienna was really bad for us,” said Ukolova about losing five weeks ago in the preliminary rounds at the Austria Major. “Since then, we had played some good tournaments and even won the Russian Championships, so I think all of that helped us to regain our confidence for the World Tour.” 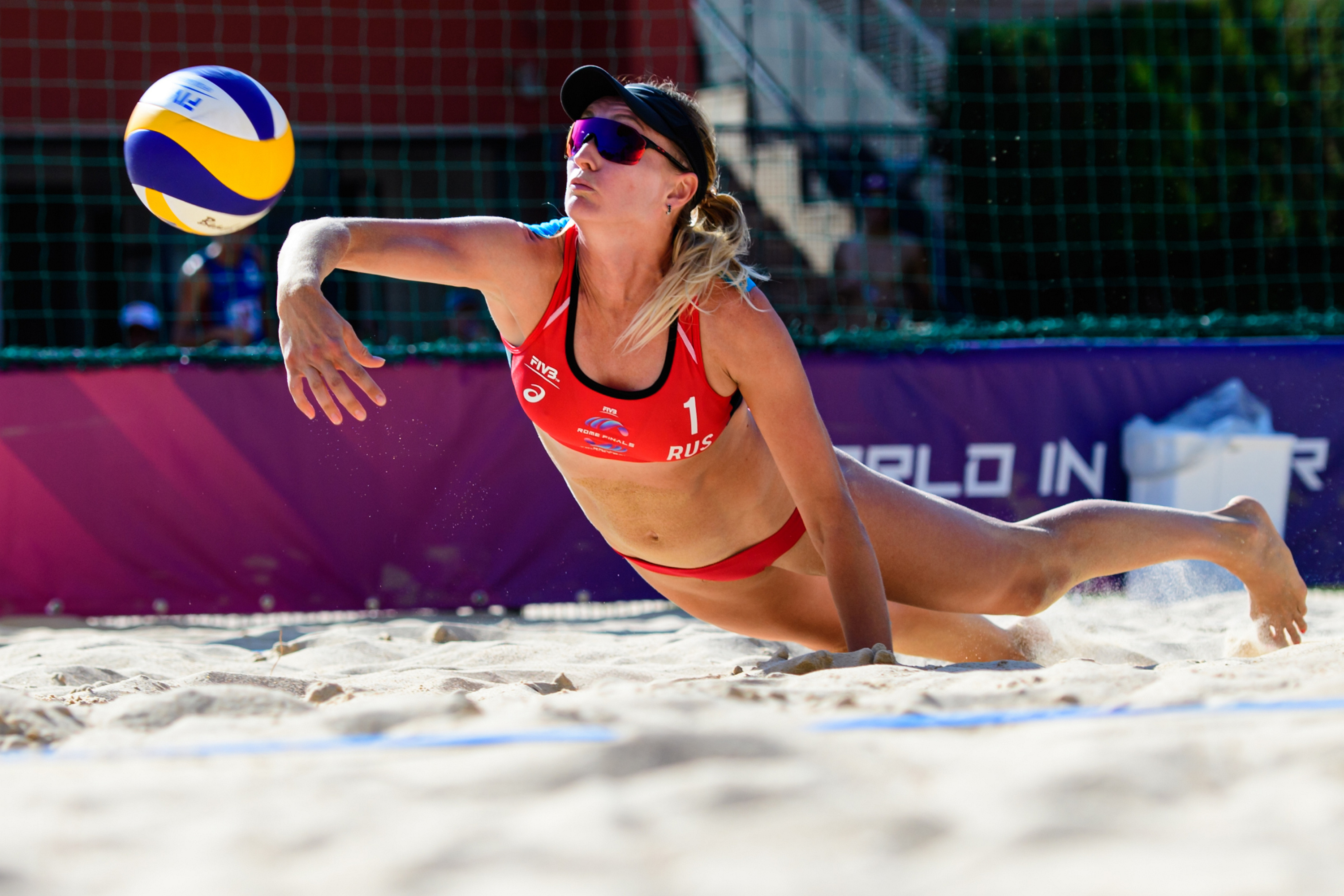 A chicken wing for Ekaterina Birlova of Russia
Other teams qualifying Wednesday were fourth-seeded Victoria Bieneck/Isabel Schneider of Germany, ninth-seeded Miki Ishii/Megumi Murakami of Japan and 10th-seeded Michaela Kubickova/Michala Kvapilova of the Czech Republic.
Following Thursday’s two rounds of pool play matches for the 32 teams in the main draw, the top three teams from each of the eight groups advance to Friday’s first two rounds of elimination.  The quarter- and semifinal contests will be played Saturday followed by the medal matches Sunday at the Foro Italico.