Moscow, Russia, March 9, 2020 – Kseniia Parubets once again proved her worth by helping Uralochka-NTMK Ekaterinburg push through to the semifinals of the women’s Superliga in Russia with fantastic performances over the two five-set quarterfinals against Sakhalin Yuzhno-Sakhalinsk, as the last four in the race for the title emerged without major surprises.

Moscow, Russia, March 9, 2020 – Kseniia Parubets once again proved her worth by helping Uralochka-NTMK Ekaterinburg push through to the semifinals of the women’s Superliga in Russia with fantastic performances over the two five-set quarterfinals against Sakhalin Yuzhno-Sakhalinsk, as the last four in the race for the title emerged without major surprises.
Parubets on fire in Uralochka’s nail-biting wins
Having already topped the scorers’ chart of the regular season, the outside spiker of Uralochka and the Russian national team hammered out a combined total of 68 points towards the two victories over Sakhalin. In the first game in Yuzhno-Sakhalinsk, Parubets produced 31 spiking points to help Uralochka come back from a two-set deficit on the way to a 3-2 (24-26, 22-25, 25-23, 26-24, 15-8) win. Her teammate, middle blocker Ekaterina Evdokimova, impressed with nine stuff blocks towards a match total of 19 points.
In the return match at home, Parubets marked International Women’s Day with a remarkable 37-point tally (including two aces and one block), and a 100% mark in reception. This time, Uralochka failed to hold on to a two-set advantage, but were once again successful in the tie-breaker – 3-2 (25-22, 25-18, 22-25, 20-25, 15-11). Evdokimova scored four blocking points towards a total of 15.
Stable Voronkova leads Lokomotiv to semis
In the semifinal playoffs, Parubets will go face to face with the other Russian national team main outside spiker, Irina Voronkova, as the team of Lokomotiv Kaliningrad also made the last four. Voronkova led the squad from the Baltic coast, scoring 20 points for each of the two quarterfinal wins over Dinamo Krasnodar. Lokomotiv won the away game by 3-1 (20-25, 25-20, 25-14, 25-14), with former Cuban international opposite Ana Cleger top-scoring 21 points while Serbian national team setter Bojana Zivkovic-Drca stunned the opponents with five aces. Voronkova herself was the best scorer of the second match, which Lokomotiv won by 3-0 (25-20, 25-23, 25-20) on home ground.
Goncharova rock-solid while on court; Shcherban steps in
Nataliya Goncharova blasted 35 points (including three blocks and one ace) in the four sets of Dinamo Moscow’s 3-1 (25-18, 23-25, 25-20, 25-17) away win at Proton Saratov. The Sbornaya star opposite delivered another 16 spikes in the first three sets of the return match in Moscow, but once Dinamo had secured their spot in the semis, she was off the court while Proton fought their way to a 3-2 (25-17, 24-26, 23-25, 25-20, 15-12) win. 2016 Olympian Yana Shcherban took over as the best scorer of the match, stringing up 28 points for Dinamo.
Fabris shows efficiency
Dinamo Kazan will be Dinamo Moscow’s opponent in the semifinal playoffs. Croatian international Samanta Fabris showed great scoring efficiency in the Tatari powerhouse’s two quarterfinal matches against Leningradka Saint Petersburg. Over the five sets she played, the opposite contributed a total of 40 points amounting to an average of 8.00 per set, the highest in the quarterfinal playoffs. She top-scored 26 points towards Dinamo Kazan’s 3-0 (25-18, 25-22, 25-23) victory in Saint Petersburg, and produced another 14 in the first two sets of the home game in Kazan. Once Dinamo stamped their place in the semis, Fabris stepped off to make way for her Dominican teammate Bethania de la Cruz to top the charts of the match with 19 points towards the 3-0 (25-20, 25-18, 28-26) win. 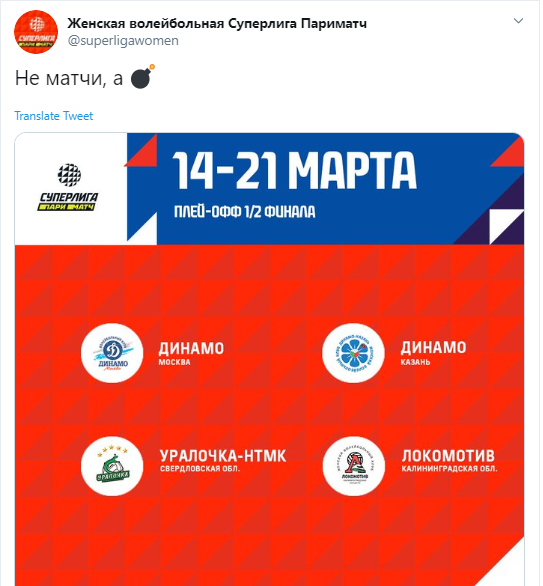 The semifinal series are scheduled for March 14 and 21, again in a home-and-away format with a golden set as the tie-breaker. The teams placed higher in the regular season final standings, Dinamo Kazan and Lokomotiv, will host the second leg games. Additional playoff matches will be played for the distribution of the places from 5th through 8th and from 9th through 12th, with the bottom-ranked team facing a relegation playout with the winner of the second-division league.
More volleyball from Russia:
Maciej Muzaj’s top five scoring performances in Russia
Dinamo Kazan top regular season in Russia, all set for playoffs
End of an era? Zenit’s earliest ever Champions League exit
Kseniia Parubets shines as Champions League top scorer
Olympic champ returns to Russian Superliga
Russian national team opposites engage in scoring race
Poletaev back in action after injury
Goncharova proves priceless for Dinamo
Quick links:
FIVB Volleyball Nations League
Olympic Games Tokyo 2020
Facebook
Twitter
Instagram
Youtube