Patience the key as Lupo prepares return to action

Rome, Italy, May 27, 2020 – Italy’s Daniele Lupo will be able to leave his frustration behind him with the news that Italy’s government is allowing beaches to reopen, along with gyms and sports facilities.

Rome, Italy, May 27, 2020 – Italy’s Daniele Lupo will be able to leave his frustration behind him with the news that Italy’s government is allowing beaches to reopen, along with gyms and sports facilities.
Until now Italy’s strict lockdown laws during the Covid-19 crisis have meant that the closest the Rio de Janeiro 2016 Olympic silver medal-winning player has come to the sea is looking through his window to the beach 50m across the road from his house in Fregene, a seaside town 40-kilometres from the centre of Rome.
It meant he was left to train at an indoor beach training facility in Rome where he has undergone punishing days of two hours of conditioning followed by three hours of technical work, all to be ready when he and Paolo Nicolai return to compete on the FIVB Beach Volleyball World Tour.
“I haven’t even been allowed to cross the road to the beach there, but even so, I’ve never trained so hard from the middle of March onwards,” Lupo told Italian sports daily La Gazzetta dello Sport.
“It’s my home. Me without sand is like a fish without water. I cannot survive. I look at it from my window and think how absurd it is to not be able to go over there and play with my family as I always have done. Luckily, I have a lovely garden.
“In training I do exercises to control the ball, spiking, technique without the ball, making sure everything is precise. Everything that my experience and imagination can conjure up. I cannot waste this opportunity.” 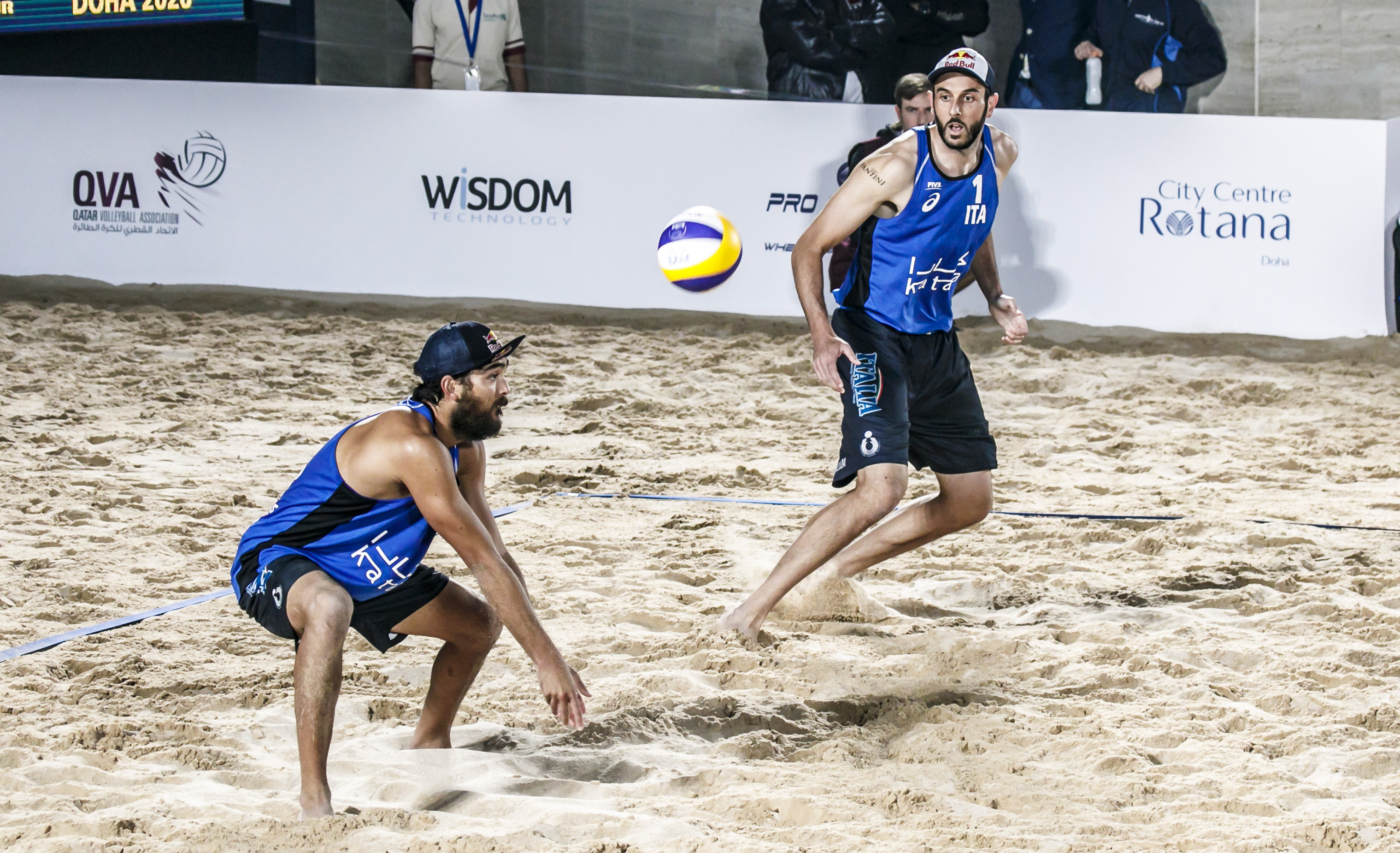 While Lupo is honing his skills on one side of Italy’s peninsula, Nicolai is at home in Ortona on Italy’s Adriatic coast.
When the World Tour was put on hold in mid-March Lupo and Nicolai were returning to their best form. They had already qualified for Tokyo 2020 by winning the FIVB Tokyo Beach Volleyball Qualification tournament at Golden Beach in Haiyang, China in September.
Then in the final World Tour tournament to take place, the Doha 4-Star in Qatar, they won bronze. It was their first World Tour medal since they left the 2018 Gstaad 5-Star having finished third.
In Doha Lupo and Nicolai were the only Italian team there. They had flown in from Florida where they had been training with Phil Dalhausser and Nick Lucena on Daytona Beach. It meant they were not constrained by Italy’s lockdown laws that stopped the other Italian teams from travelling, though they flew straight back to Italy after the tournament.
“Paolo is in Ortona,” Lupo said. “For the moment we cannot travel to other regions, so we are separated. But he is a great professional and I know that even though he will be a little behind in his conditioning as he lives in an apartment and hasn’t the room to train properly, he will quickly be back in his best shape.
“It won’t take much to rediscover our rhythm and intensity. Both of us have worked extremely hard these last few weeks and we’ve followed the advice of our coaches Matteo Varnier and Alberto Di Mario.”
Like all athletes around the world the 28-year-old Lupo is waiting for competition to start again and the chance to build on the momentum that he and Nicolai were building.
Following their success at Rio 2016 Lupo was given the honour of carrying Italy’s flag at the closing ceremony, but they will have to wait another 12 months for their third Olympic Games after Tokyo 2020 was pushed back by 12 months.
“For now, we are observing how the situation changes,” Lupo said. “We are taking stock day by day, and so will continue that way.
“I hope that we can start playing in the middle of July. I hope that day arrives soon. What a beautiful sensation it will be. I have missed it so much during quarantine.”
Quick links:
FIVB Beach Volleyball World Tour
Facebook
Twitter
Instagram
Youtube
More volleyball from Italy:
Sylla aiming to maximise break for Tokyo Benefit
Savani takes his leave from volleyball
Bisonte firm up squad for next season
Blengini hopes young guns can take their chance
Egonu sounds warning to rivals
Nicolai and Lupo enjoying Florida delights
Lube Civitanova in dreamland with Coppa Italia victory
Colaci has new deal, but no new trophy
Leal and Simon celebrate new deals in style
Giani hails perfect 10 as Modena keep up the chase
Menegatti not taking Tokyo 2020 qualification for granted
Mazzanti ready for fight in Tokyo 2020 pool
Christenson keeps Modena in the hunt for Italian title
Blengini taking nothing for granted after Olympic pool draw
Carambula in World Tour form on Copacabana
Atanasijevic celebrates new contract in style
Egonu in top form as Conegliano add another trophy to their collection
Piccinini is back!
This website uses cookies to ensure you get the best experience on our website. For more information please read our Cookies Policy.
Ok