Pavan returns to Canada as a world champion 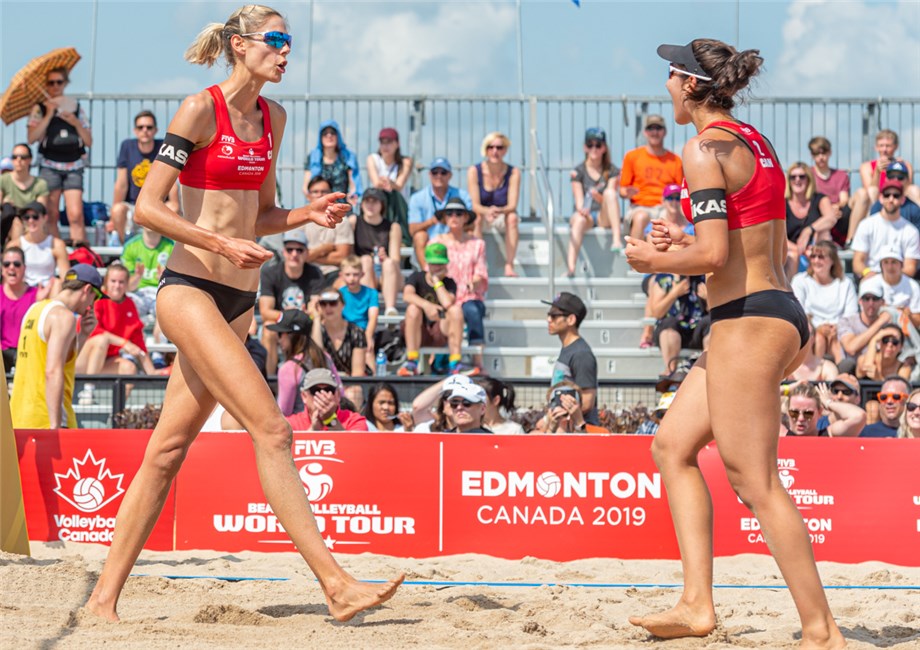 Sarah Pavan (left) and Melissa Humana-Paredes in action in Edmonton

Edmonton, Canada, July 17, 2019 - Since she started playing volleyball in the mid-1990s as a 10-year-old, Sarah Pavan has had a long and decorated career in the sport where her mother played on the Canadian national team in the late 1970s and her father has been her coach.
Quick links - Beach volleyball:
FIVB World Tour - Edmonton, Canada
FIVB.com - Beach volleyball
Facebook
Twitter
Instagram
Pavan was a four-time All-American at the University of Nebraska in the United States where she is one of five players to accomplish that feat along with Kerri Walsh Jennings.
She has represented Canada internationally since 2001 and is one of the few athletes in the world to play both indoor and beach volleyball at the highest level.  She has competed in the best indoor leagues in the world, including Italy, Brazil, Korea and China.
Pavan started playing beach volleyball in 2013 and finished fifth at the Rio 2016 Olympic Games with Heather Bansley.  She has been named the best blocker on the FIVB World Tour in 2015 and 2017 and has won four gold medals with two different partners on the international circuit.
After ending her partnership with Bansley after the Rio Summer Games, Pavan teamed with Melissa Humana-Paredes and placed fourth at the 2017 FIVB World Championships in Austria.  In the Vienna semifinals, the Canadian pair lost to Lauren Fendrick and April Ross of the United States in three sets (19-21, 21-16-21, 15-11 in 55 minutes).
Two years later in Germany at the 2019 FIVB World Championships, Pavan and Humana-Paredes avenged the setback to an American opponent in Hamburg by posting a 2-0 (23-21, 23-21) win over Ross and new partner Alix Klineman to secure the World Championship trophy for Canada and a spot in the 2020 Olympics. 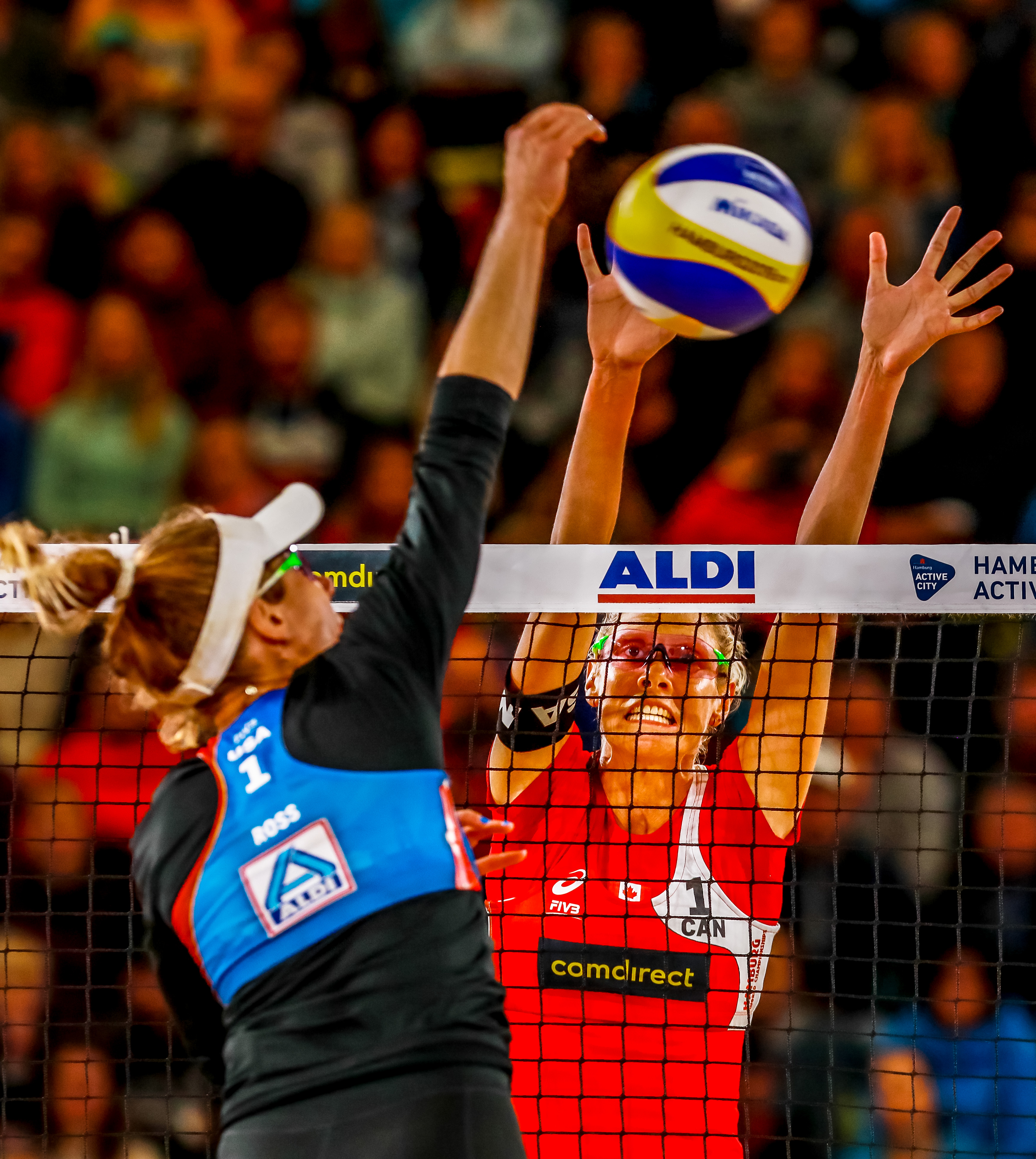 Sarah Pavan (right) of Canada at the 2019 World Championship net against American April Ross.
"Being a beach volleyball world champion, and the first from Canada, is the highlight of my volleyball career so far,” said Pavan.  “It has always been a dream of mine to stand atop that podium, and it is a feeling I will never forget. I never thought my career would take the path that it did, but this title trumps everything else so far. We are hunting for Olympic gold next!"
The next event on Pavan and Humana-Paredes' schedule starts here Thursday on the grounds of Northlands Park for the inaugural Edmonton Open.
The $150,000 Edmonton Open, the first of two 2019 FIVB World Tour events in North America this season, features both women and men's competition and concludes Sunday with the medal matches. Mexico hosts the second World Tour stop November 13-17 for the second annual Chetumal Open.
"Melissa and I are so excited to be able to return to Canada to bring both the excitement of beach volleyball and our World Championship gold medals home," said the 32-year old Pavan Tuesday at a media conference promoting the event.
"This is a great opportunity to help grow the sport in our country, and after the overwhelming outpouring of support after our win last week, we are really looking forward to sharing our joy with our fans at home."
Pavan also noted earlier that she and Melissa were "really curious to see how the event in Edmonton will unfold. John May has put a lot of work in to making this a top-tier event, and his passion for beach volleyball and growing the sport in Canada is inspiring. We are honoured to be able to be part of this project and we hope the Canadian volleyball community will come out to support all of the beach volleyball athletes competing this week." 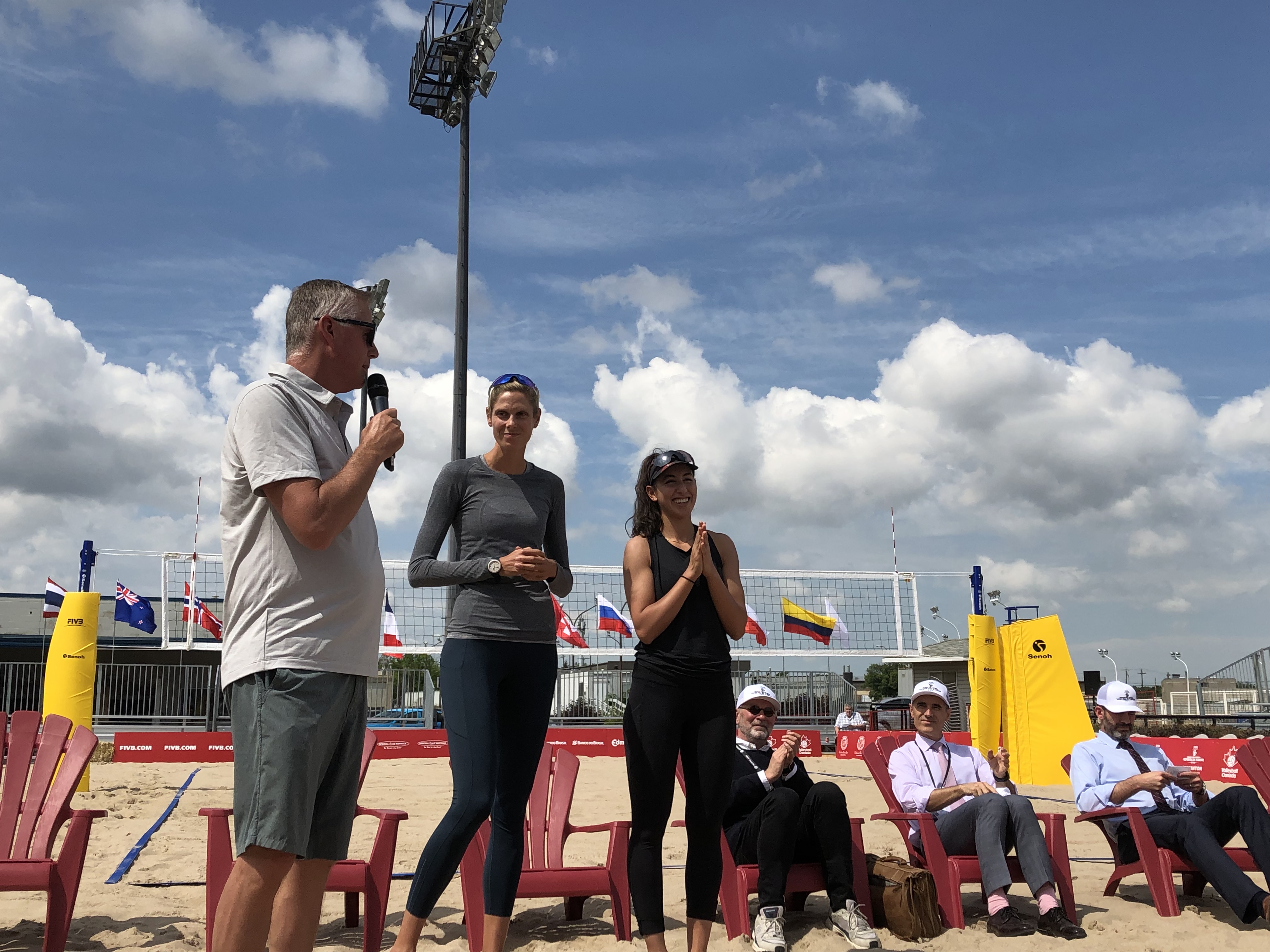 John May (left) introduced Sarah Pavan (center) and Melissa Humana-Paredes at a Tuesday media conference in Edmonton.
With Canada staging is first points-producing event on the FIVB World Tour since a stop in 2011 in Quebec, Pavan said "it has been such a rare occurrence in recent years for the World Tour to make a stop in Canada."
Pavan noted that Melissa "has almost her whole family attending the event, and my husband and in-laws have made the trip to cheer us on as well. We hope that this will be the start of a long run of Canadian World Tour events to come."
As for the 2019 World Championships in Germany, Pavan said her team "was razor-focused all week in Hamburg and our fourth-place finish at the 2017 Worlds in Vienna was definitely in the back of our minds. We have grown so much as a team since our first season together in 2017, and that is evident mostly in the intangible things like our communication, in-game strategic planning, and attitudes towards high-level performance and winning."
The Canadians enter this week's competition after finishing fifth last week in Switzerland. Pavan said of the Gstaad placement "It was incredibly disappointing, but after Hamburg, I think we would have been disappointed with anything other than gold. Winning on such a big stage takes a lot of emotional energy, and it was difficult to rebound after that just a few days later. Again, I think we learned some valuable lessons from that experience, and it makes us want to improve and be better for the upcoming tournaments." 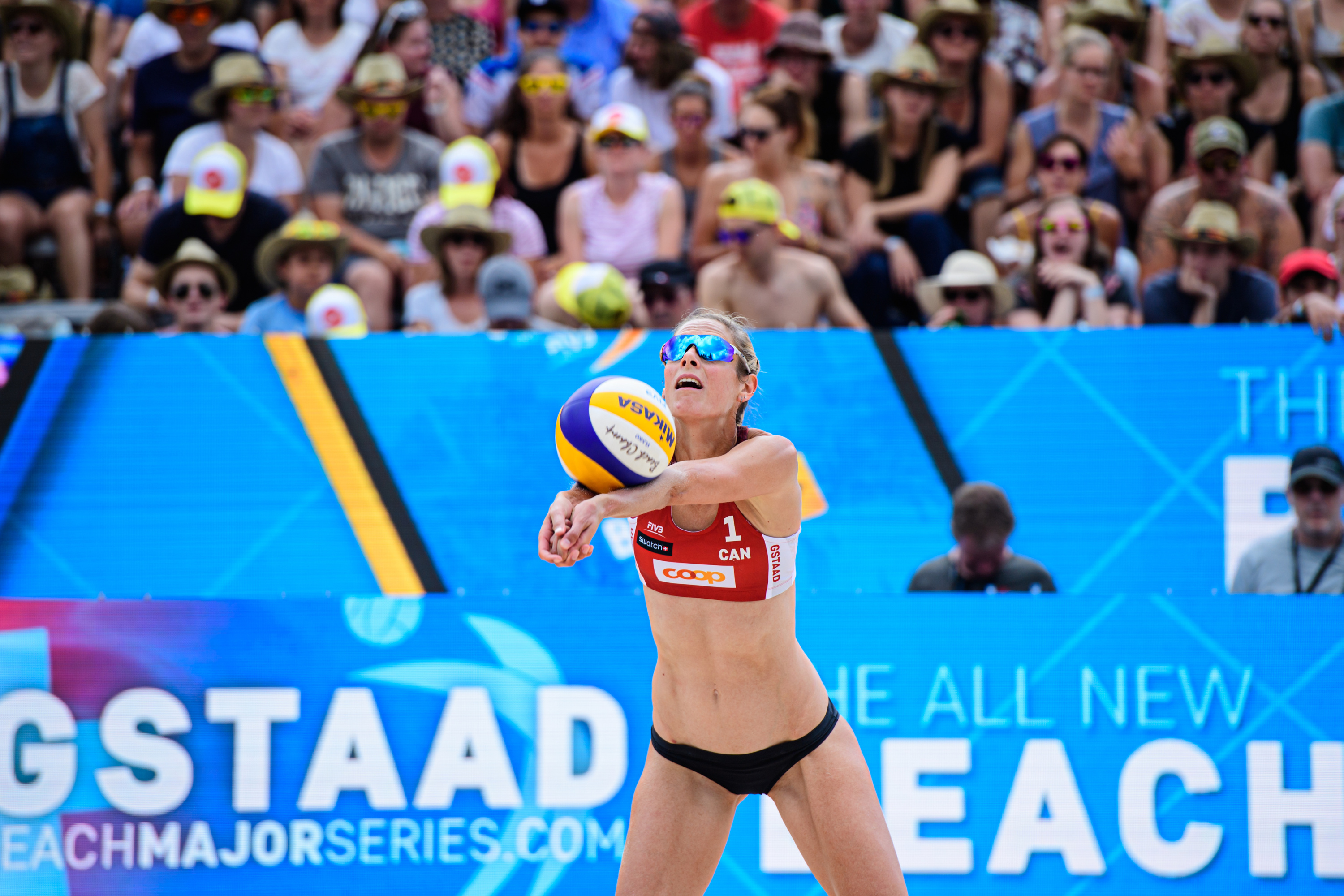 Sarah Pavan bumping the Mikasa in Gstaad last week
Following Edmonton, there will be no rest for Pavan and Humana-Paredes as the pair heads to Tokyo next week for the Olympic test event at the site of the 2020 Summer Games.  After a week in Japan, the Canadians continue heading west to Austria for the Vienna Major before taking a month off.
The next three events are very important for Pavan and Humana-Paredes. The first is playing on home sand in Edmonton, the second is getting a feel for the playing conditions in Tokyo and the third is a Major event in Vienna.